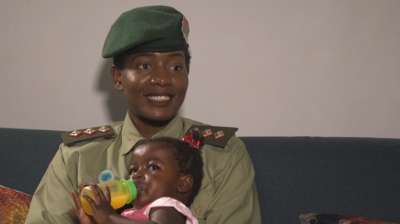 Zambian army Captain Mwila Chansa has spoken of her battle to adopt a baby she first met while on deployment as a UN peacekeeper in the Central African Republic.

The baby girl’s mother was pregnant with twins, but developed a complication and died after giving birth to the first baby in November 2020. The second child died before birth.

Captain Chansa visited Birao, near the border with Sudan and Chad, in March 2021 when she heard the story of the baby – who was by then under the care of a nurse in the Zambian camp.

She made a decision to adopt it, but the bureaucracy turned into a long and laborious process in navigating the country’s Islamic law.

“I went to Google, trying to look up how to adopt a child from CAR. All the information was about USAid and how easy it is for Americans generally to adopt children. But there was nothing in regards to a Zambian adopting a child there,” she told the BBC.

The captain said her “deep conviction” saw her “fight tooth and nail” to “engage the powers that be until the baby was here [Zambia’s capital, Lusaka]”.

“It just reminds me so much of the story of the biblical Moses,” she said.

“Adopting a child is like falling in love. You see so many men or so many women but you only choose one.”

“I woke up, my phone was buzzing. I was wondering what was going on?” she said.

She has big ambitions for her baby daughter who she named Thabo.

“I would wish for her to be the president of the Central African Republic. I say that without flinching,” she said.

Transracial adoption: ‘I’ve been accused of kidnapping my white…

The miracle of our separation – Conjoined twins, Ervina and Prefina