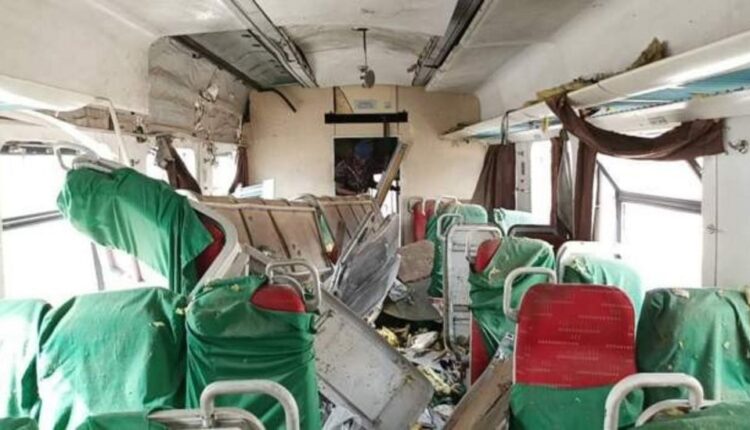 It was a few minutes before eight. I cannot tell you where exactly we were, but we suddenly went off track and was rolling on stones.

The lights in the train went off so we were in darkness and suddenly bullets struck all around and we could hear the voices outside. The voices kept getting louder and louder, so it meant they were getting closer and closer to the train.

So, they came onboard through the doors of the neighbouring coach and then we heard a few gunshots. I could hear people pleading when they were coming from the train. We knew some people were being removed from the train.

All the while this was happening, there were gunshots, gun fire. After awhile there was silence. A few people brought out their phones and others shouted and asked them to put off their phones.

All of that went on for about ten minutes and then the shooting started again. Everyone then quieted down. There was a woman across the aisle from where my wife was lying down, we later found out she was the doctor that died.

She was initially complaining that someone was lying on her and that the person needed to get up. We do not know if the person did get up, but she stopped complaining after awhile. We now saw lights coming from the direction where the people who just boarded the train had come from.

The light kept on becoming brighter and brighter until the door of our coach opened. That was when whoever opened the door announced that they were the military. The army had come, secured the area and they were over 500 soldiers. We are alive only because the military arrived.

On 28 March 2022, an Abuja–Kaduna train was attacked in Katari, Kaduna State, Nigeria. Approximately 970 passengers were on board at the time of the attack. At least nine people died and over 62 passengers taken hostage. Yakubu Aku was a passenger on this train.