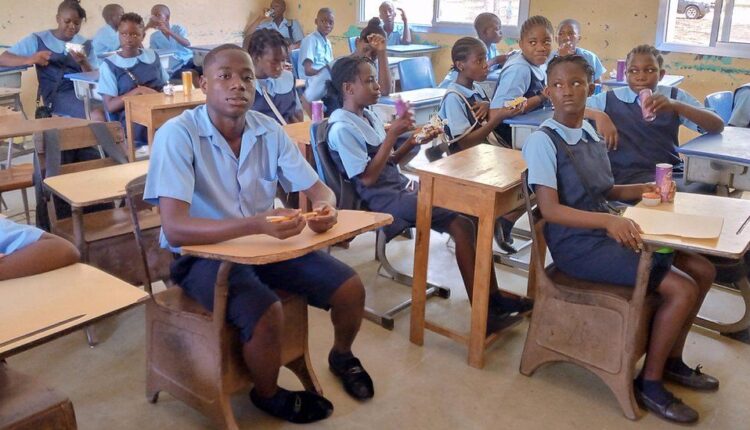 The 19-year-old, dressed in a school uniform of sky blue shirt and navy shorts, looks incongruous in a class full of pupils at least six years younger than him.

But the one-time primary school dropout is happy.

Last year, he was struggling to earn a living as a motorbike taxi driver when he found $50,000 (£40,000) in a mix of US and Liberian notes, wrapped in a plastic bag by the side of the road.

He could have easily pocketed this life-changing amount. But he gave it to his aunt to look after and when the rightful owner appealed on national radio for help in finding the cash, Emmanuel came forward.

Mocked by some for his honesty – people laughed at him saying he would die poor – his act earned him generous rewards including a place at Ricks Institute, one of Liberia’s most prestigious schools.

President George Weah handed him $10,000 and a local media owner also gave him cash, some of which was raised from viewers and listeners. And the owner of the money that was found donated $1,500-worth of goods.

On top of those and perhaps most significantly, a college in the US reacted by offering him a full scholarship once he had completed his secondary education.

And that is what he is focused on at Ricks, a boarding school set up 135 years ago for the elite of Liberian society descended from the freed slaves who founded the country. Its two-storey buildings sit on a beautiful, lush campus 6km (3.5 miles) from the Atlantic coast.

“I am enjoying the school, not because Ricks has a big name but because of the academic and moral disciplines,” Emmanuel said, chuckling and playing with the collar of his shirt as he talked.

Like many Liberian children from a poor rural background are forced to do, he dropped out of school at the age of nine in order to earn some money to help his family out. This was shortly after his father had died in a drowning accident and he went to live with his aunt.

He became a motorbike taxi driver just a couple of years later.

After such a long time out of education, he needs a lot of extra support at school.

When Emmanuel first joined the sixth-grade class “he was feeling a bit inferior; he could not voice himself in the classroom, but day-by-day we worked on him”, his main class teacher Tamba Bangbeor explained to the BBC.

“Academically, he came with a low foundation, so we tried to put him in the enrichment programme. That has been helping him.”

He now has six years of secondary school ahead of him and will be 25 when he graduates. But he does not mind the age gap with his classmates and describes them as “friendly”.

Emmanuel also enjoys boarding, saying that “dormitory life is good because this is a way of learning to live on your own someday”.

Looking at the future, he wants to study accounting at university “to prepare myself to help guide the use of the country’s money”.

His prudence and honesty were seen as examples to follow in a country where allegations of corruption are rife and where officials are often accused of stealing state resources.

‘Good to be honest’

Reflecting on the way that some people made fun of him for returning the money, he acknowledges that he could have used the funds to improve his material situation “but it was never going to get me the opportunity I now have”.

Emmanuel thanked God for giving him the rewards and he was also “grateful to my parents for teaching me to be honest”.

“And my message to all young people is: It’s good to be honest; don’t take what does not belong to you.”

The teachers at Ricks appreciate Emmanuel being there.

“Not only have we recently benefitted from his honesty as a school, he’s the second-choice goalkeeper for the school’s football team, ” Mr Bangbeor said of the die-hard Chelsea fan, who plays in the team alongside students closer to his age.

Emmanuel’s classmates also welcome him being there.

Bethlene Kelley, 11, called him “a great friend that we like sharing with and caring for because he’s quiet and doesn’t talk too much. [He is] loyal, respectful and truthful”.

Caleb Cooper, 12 appreciates Emmanuel for his conduct in class and in the dormitory.

“If Emmanuel finds something that does not belong to him, he reports it to the teacher. If the teacher is not around, he puts it on their desk,” he said.

And from the life Emmanuel left behind, motorcycle taxi drivers do not appear to begrudge his new prospects.

One of them, Lawrence Fleming, 30, told the BBC he dropped out of school in the ninth grade as a teen and he had closely followed Emmanuel’s story.

“It’s a good thing that Emmanuel has gone back to school, we thank God for him,” he said.

Standing by his Chinese-made Boxer motorcycle at the busy crossroads town of Brewerville, west of Monrovia, he passed on a word of advice.

“Let him remain in school for his future and the future of his children… he now has an opportunity that some of us don’t have.”