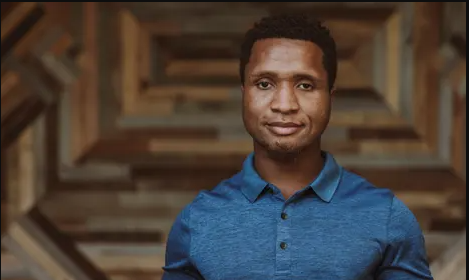 Normally in facial reconstructive surgery they use the working bones as support, but in my case there weren’t any.

Last year, I was enrolled on a master’s course in computer software engineering at Carnegie Mellon University in Silicon Valley. Most of my time was spent studying, but I hung out a lot with my twin brother, who also studied there. We lived together, liked to work out in the gym, and helped each other study. I was living a normal student life.

Last November, my older brother came from Georgia to visit. One evening, the three of us were chilling on the balcony of my apartment, then my brothers went to bed.

From then on, I don’t know what happened. I remember waking up in a hospital and being told I had fallen off our 30ft (nine-metre) balcony. I can remember my life about 30 minutes before the fall, but nothing after that. A lot of people say, “Oh my God, that must be the most painful experience imaginable”, but I don’t remember.

When I regained consciousness, my main concern was for my twin brother because I wasn’t sure if he knew what had happened to me – he might have thought I was dead.

I didn’t have my phone on me, but the hospital called him. I later found out that he had seen my body on the ground. Someone on the ground floor had heard the impact of my fall and called the paramedics.

Initially, I thought I just had a broken jaw, because it was split in two, but then I found out that my chin splitting reverberated throughout the rest of my face, breaking every single bone in it – all 14 facial bones.

This made things challenging, because normally in facial reconstructive surgery they use the working bones as support to build around the broken ones, but in my case there weren’t any.

Thankfully, one of the leading specialists in the world for this kind of surgery was based at the hospital I was in; I was in the best hands possible. The surgeon promised me that by the time he was finished I would be better-looking than my twin.

I had incisions under my lip, under my eyelids, on the side of my jaw and across the top of my head. They used 3D printing technology to reconstruct my face, making titanium plates – which would connect the broken bone fragments together – to fit where they would need to be implanted. They used nearly 100 screws to hold the plates together.

I spent four days in the intensive care unit afterwards. I was in so much pain; I couldn’t walk, and my brother and my dad had to carry me up the stairs. I couldn’t sleep because it hurt to rest my face on a pillow.

My jaw was wired shut, so I was on liquids and lost a lot of weight. They pulled one of my teeth out during the surgery to create a gap, so I could fit a tube in there and feed myself. Without it, I wouldn’t have been able to eat.

It was a very long, agonising process. I had a lot of swelling for some time, so I had no idea what I would look like by the end.

I filmed and photographed my recovery and shared it online. People on social media were nice; there were lots of positive comments, and they were kind about my appearance. It took until about May until I started to feel as if I looked like myself again.

Before my accident, I was a confident and self-assured person. I was on track to graduate as a software engineer and I had my first job lined up at a tech company. After the accident, I couldn’t even look in the mirror for a while because I was constantly reminded of what had happened. I missed the person that I used to be. I was lucky to have my twin brother with me the entire time though – he’s my best friend.

Nowadays, I’m optimistic. If I look how I look now for the rest of my life, I’ll be OK with that. I look pretty good, all things considered.

I’ve got a great new job, I have just bought a house, and I’ve regained that old confidence and self-assuredness during these past few months. I’m looking forward to starting to live the life that I imagined for myself.