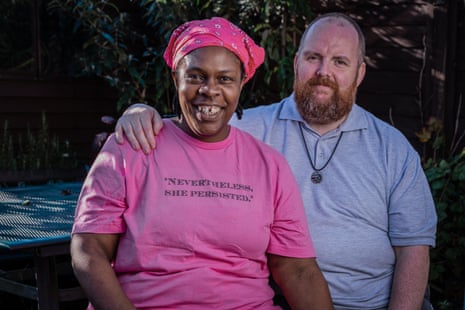 When I see our wedding photos, it’s like looking at someone else’s.

One cold, crisp evening in February 2016, I went on a white-water kayaking course in Hertfordshire. I’d had lessons, but I was still a beginner and my skills weren’t as strong as the flow of the water.

I spun, flipped and tipped. I heard a loud thud. I didn’t know which way was up. There was a sharp pain on my brow below my helmet, water red like wine, tossing and whirling me in the current.

There were shouts and ropes thrown, my coach scooping me to safety. The duty manager picked me up, then called an ambulance. In hospital, I realised something was wrong. I couldn’t remember my name, and everything made me laugh, even being asked to lie down for the CT scan. I thought my husband, Richard, was my dad, and my daughter was my sister.

The doctor told Richard I’d be better in a few weeks. But six disorienting months later, after an MRI, I was diagnosed with post-concussion syndrome, and cognitive, communication and memory difficulties caused by my head injury.

Things changed after the accident. Before, I was the chief at home. I organised the household and sorted any issues with our then-teenage daughters, Lucy-Rose and Caitlyn. Richard and I shared aspirations, but I made things happen. I had more oomph. It was annoying sometimes. He said he was laid-back; I said that wasn’t the word I’d use. But we worked well together.

My amnesia frustrated us. I couldn’t remember anything about Richard. I was living with a stranger. So was he. Bewildered and overwhelmed, I cried daily. Richard never criticised; he just encouraged me. I’d forget I’d turned on the cooker. He’d ask: “Is something burning?” His approach helped me stay calm. We’d smile and say: “Oops.”

We loved the outdoors. Our honeymoon included quad biking, cycling and skiing in Scotland. After the accident, I stopped going out because I couldn’t recognise people, places or events. I had to leave my learning-support job and teacher-training programme. My five-second memory wouldn’t get me through. Nor my lack of self-awareness. I had a personality change. Before, I’d been capable, liked and in control, and that person had gone. I got into a low place.

When we look at our wedding photos, it’s like being shown someone else’s pictures. It looks nice, the people are smiling. But I don’t remember it. I feel sad for Richard that we can’t have those shared memories.

I’d ask him: “Why are you still with me?” “You’re still you,” he’d say. “I made a commitment to you. It would have been easier to walk away. But that would have said more about me than you.”

Over time I watched him, asking if he felt worried and why, or happy and why. After a few years, I could hold enough information in my head to realise that I had married a really lovely person.

Five months after the accident, I started adventuring again. I don’t recognise all the dangers, but Richard helps me. I’ve learned to ride a motorbike and joined a kayaking club.

I was 44 when I had the accident. My plan for middle age as a “work hard, play hard, family tops everything” period didn’t happen. My memory problems make me selfish because I forget what people are going through. My mind can only deal with me.

I was desperate to work, so in February 2017 I became an NHS healthcare assistant. I wanted to help pick up people who feel down on their luck, health-wise. It’s tricky, but my managers adjust my role so that my disability doesn’t hinder me.

The chaos after a life-changing accident offers a chance to take stock. I’ve encountered people who are wonderful and people who aren’t – the way they treat someone with a brain injury is a good way to sort them. Surrounded by the right people, it really isn’t all bad.

I forget that I married a lovely person, and then rediscover it, daily. Richard is there, encouraging my recovery, catching me when I fall. I can trust him with every aspect of my life. I have to rely on him. But knowing my trust is rightly placed is something else.