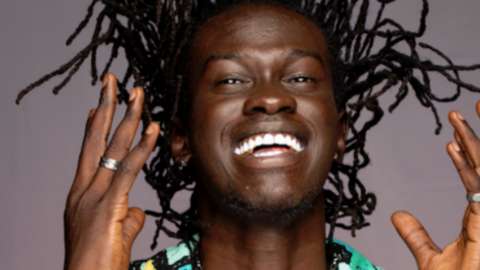 Since 2018, South Sudanese comedian Akau Jambo dreamt about his country hosting its own international comedy festival.

He was inspired by all the comedy shows he had seen on a visit to South Africa, and how it can attract tourists.

“I felt like I needed to do something like that in my own country”, he told BBC Newsday presenter James Copnall.

Now his dream has come true. South Sudan will host its first-ever international comedy festival this weekend, featuring comedians from other African countries like Kenya, Uganda and South Africa.

Jambo wants to show people another side of South Sudan, outside of the everyday news stories depicting violence and insecurity.

“People think that we’re out here dropping bombs every night like music albums, but yet we have time to laugh”, he said, describing South Sudanese people as “happy”.

Jambo remembers one incident in South Africa which stuck with him. He was out at a comedy gig when a fellow comedian asked him: “Dang, do people also laugh in South Sudan?”

It was sarcastic, but it affected him – and strengthened his resolve to launch Juba’s international comedy festival.

South Sudan, which is home to more than 60 different major ethnic groups, has faced ongoing conflict. Recently, there had been tensions over the implementation of a peace deal signed in 2018 following five years of civil war.

What distinguishes South Sudanese comedy from other forms is the dark sense of humour the people have, Jambo says.

They use humour to navigate around the “really crazy” things that happen there as well as navigating around the “very different cultures” within the country, he adds.

When it comes to jokes, nothing is off limits.

“If I find it funny I’m gonna drop it right there, even if it’s politics,” he says.

My journey with HIV has been good, bad and ugly