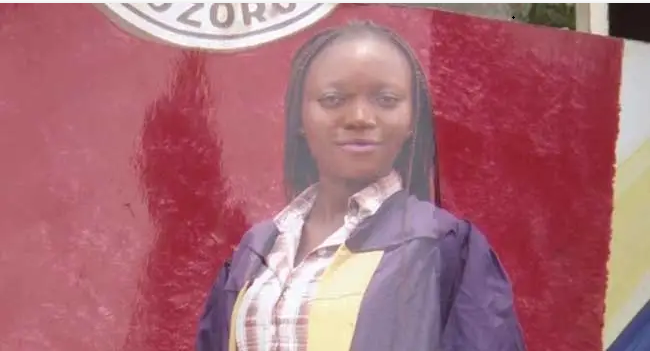 My name is William Oniovosa, I am the father of Elohor.

The incident happened on Christmas Eve. A day before, December 23, 2021, at about 8pm or 9pm, my daughter, Elohor, received a phone call from her boyfriend, Osaretin, who is simply called Osas, who told her that he was ill and asked her to come over to his house and see him.

The house where the boy was staying is a rented apartment not far from our house; it’s just on the other side of the road. My wife, Comfort, told one of the boys in the neighborhood to follow our daughter to Osas’ place. When they got there, Osas told her he was sick and asked her to get him some drugs. Elohor bought drugs for him and made sure he took them before she and the boy who accompanied her returned to the house at about past 10pm. We all went to bed hoping for a good Christmas Eve.

On the following morning at about 6.30am, my daughter was woken up by a call from Osas who requested that she should immediately come to his place because his illness had taken a worse turn. We were still in bed when the call came and but my daughter, still in her night gown, got up and dashed out of the house. After she stepped out of the door, her mother tried to follow her but by time she got outside, our daughter was already out of sight, so the mother came back inside.

We had thought that Elohor would come back soon but she did not even about six hours after she left for the boy’s place. In the evening, I decided to go out and get something for the family. While I was out, my wife called to ask if my daughter had called me. She said she had called her many times but the phone had been switched off. After speaking with my wife, I called her number too; the phone rang and kept ringing but the call was not taken.

By the time I got back home at about 6pm, my wife too had gone out. She went to the market to get some things for the family. So, I decided to go to the boy’s place to check my daughter.

When I got to the boy’s apartment, I knocked on the door, there was no response and nobody came out to find out who was on the premises. So, I sat in the landlord’s wife shop outside the premises while waiting for my daughter’s arrival. I then saw a man come out of the building who confirmed to me that he was the landlord. I explained to him what happened and he was surprised. Then he told me to follow him to Osas’ apartment.

When we got there, we found out that the door was not locked; we went into the room, opened the door and saw my daughter lying in a pool of her blood. So, we rushed to Ogida Police Station, where two policemen followed us to the crime scene. They took pictures and did a video of the crime scene before they left. While inspecting her body, it was discovered that the boy used a machete to cut her neck and arm. The police found the cutlass under the bed which had blood stains all over it.

The boy was nowhere to be found. The police arrested his mother at Eweka off Siloko Road. They took her statement and released her. I was even the one that took her home because she didn’t know her way around town. The police told us that they were investigating the matter but painfully, the boy is still at large.

They had been dating for over 15 months. I never expected that he could kill my daughter. I took him for a gentleman; he doesn’t talk much and he doesn’t keep friends. For over a year that he dated my daughter, I never saw him with anybody one could call his friend. I am surprised and shocked that things turned out this way. I never knew this boy was like this.

He was all over my daughter and appeared to really care about her. He even gave me a bottle of wine and N1,000, one time, pleading that he didn’t have money. I never knew he had such evil intention.

He was a tipper driver before he left for Ghana. His trip to Ghana lasted for about three months and then he came back. When he came back I did not notice any changes in his behaviour.

The only time I had a cause for concern was one night he asked my daughter to come and meet him by the road to collect a phone he bought for her. When I looked towards where he said he was, I saw a vehicle parked which aroused my suspicion. I asked my daughter why the boy was not comfortable bringing the phone to her in the house instead of asking her to meet him by the roadside, since he was already used to coming to our house.

I asked my daughter if she knew the vehicle but she said she did not. About one an hour later, Osas called my daughter again and asked her to meet him at a school beside our house. Then I told her not to go and insisted that the boy should instead come to the house if he wanted to see her. While we were still sitting outside, the boy showed up and I warned him never to call my daughter out at late hours again. When I asked him about the vehicle, he said he did not know anything about it and I warned him not to call my daughter out in the night again. And he agreed not to do so again.

After reporting the case to Ogida Police Station, it was later transferred to the state headquarters. I have visited there and my statement and that of my wife were taken and we can only hope that the culprit will be arrested. The police arrested the mother at Eweka off Siloko Road. They took her statement and released her.

I suspect he used her for rituals. We don’t know if the boy took her body part despite checking thoroughly. There were deep cuts on her neck and hand. So, I feel he must have taken her blood. I want the government to find him so he can face the law. I need to know why he killed my daughter.