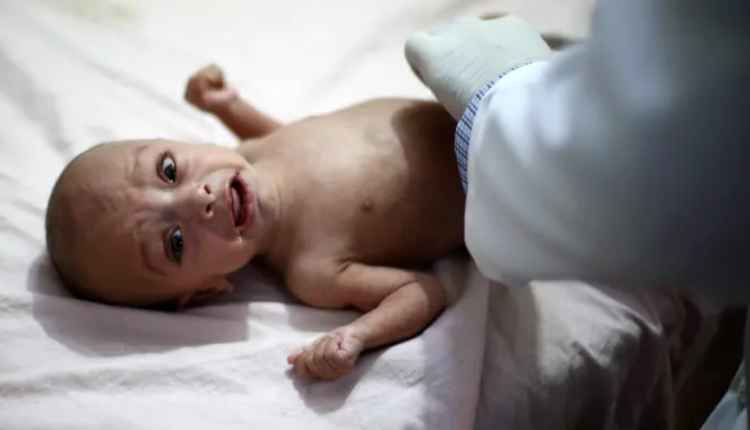 My name is Owoidogho Oton, the mother of a one-year-old boy who was allegedly thrown into a bush. Godwin Aweh is my husband. We are not legally married, but we live together. He is from Esit Eket in Akwa Ibom State of Nigeria.

He used to be a driver but now, he is a palm wine tapper. He also sells gin. We met in Eket. At that time, I was working in a restaurant. He was a regular customer at the restaurant where he declared his interest to marry me.

We have two children and they are boys. The first one’s name is Diamond and he is one year old while the second one is a month old.

Diamond was doing well after birth but when he was three months old, I began to discover that the baby shivered all night and cried loudly. When I informed the father, he told me that nothing was wrong with his child and asked whether I was wishing the child evil.

I insisted we take the baby to the hospital but he refused. I could not do it on my own because I didn’t have any money. Later on, he gave the baby herbs and said they were what his predecessors used to cure all types of sicknesses and diseases. As a result of that, the baby’s body started drying up. It became so bad that Diamond could not crawl.

Each time Godwin left for work, I cried and thought of means to take the child to a hospital. He once told me to stop feeding the child so that the child will die. Every time he returned from work and saw the baby trying to sit, he got angry and would beat him. I begged him to stop beating the child and that the child was only crying because of hunger and that it was because he insisted that I must not feed the baby.

My husband used to say to the child, “You don’t want to die, abi? You never die? People usually use people like you for rituals but I am not interested in doing that.” On different occasions, he put the child outside in the rain even at night and warned that if I ever took the child into the house, he would send me packing. Later, he came home from work and said he was no longer interested in Diamond and flung Diamond into the bush in our backyard, and left for his usual one-week trip.

Before I moved in, I was not aware my husband had children. It was later that I found out. He had always said he wanted a girl as his precious children are all boys. He complained and asked why I gave him a “possessed” child like Diamond, even if I couldn’t give him a girl. He came back home that day to tell me that he had lost interest in being Diamond’s father.

He asked me to stop feeding my child, but I had to do it in secrete. How can I not feed my own child? One day he found out and came home very angry. He then went out and threw my son in the forest. An anonymous person called a non-governmental organisation, Child’s Right And Rehabilitation Network, and informed them that there was a situation on the ground and some people from the NGO came to our rescue.

The child was taken to the hospital by Child’s Right And Rehabilitation Network after he was rescued. A doctor confirmed that Diamond was suffering from acute pneumonia, malnutrition, anemia, and breathing difficulties.

I was told that an X-ray showed a dislocation and bone fracture in the limbs. When Diamond was about four months old, my husband beat the child and mistakenly broke his leg. We were both unaware of the fracture until I discovered that something was wrong and that he had a dislocation when I wanted to bathe him. This contributed to the baby not being able to sit, crawl or walk.

Diamond’s pneumonia was as a result of being exposed in the cold for so long. The baby suffered so much in the cold and rain. As I speak, I have not been able to reach him

The boy named ‘Wealthy’ who weighs half what he should