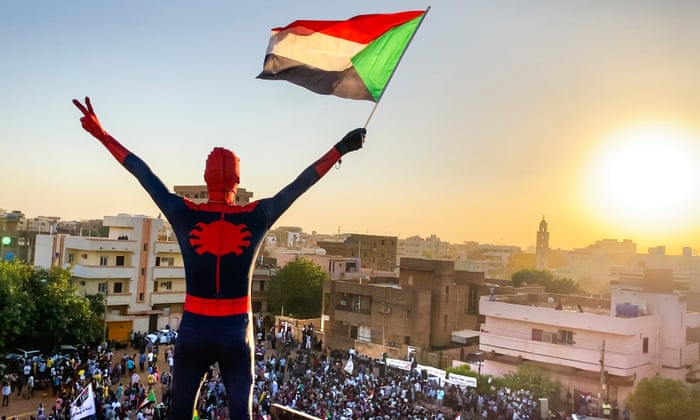 Violence and arrests will not deter Sudan’s young activists from resisting the military who “stole our revolution”, says one man who faces down the teargas and bullets in a blue and red superhero costume.

Featured in a new Guardian documentary, “the ‘Spider-Man’ of Sudan”, who cannot be named for his safety, has become a symbol of protests that began in October. Dressed in his increasingly frayed suit and mask he and other demonstrators confront teargas canisters, water cannon and often live bullets.

During the protests his childhood friend was killed by security forces, who have also been accused of sexually assaulting women and hunting down activists.

It was as a homage to his friend that he picked up the suit, less as a disguise than as a symbol of both his loss and the account they heard as children, of the spider who protects the Prophet Muhammed and his companion by spinning a web across the mouth of a cave they are hiding in, meaning their enemies pass by without looking in.

“Spidey” was among hundreds of thousands of people whose protests in 2019 led to the fall of dictator Omar al-Bashir and the creation of a transitional government, which was itself ousted in a military coup in October 2021.

“The military and counter-revolutionary parties, they stole Sudan’s revolution. They are like the former government of 30 years – there’s no difference between them and [Bashir’s] National Congress party,” he said. “They are dictators and they want only control.”

Spidey was filmed as he took part in the protests, as well as in his other role as a self-taught scientist who teaches robotics to young children.

At a secret meeting of a resistance committee coordinating localised actions around Sudan, Spidey and his fellow activists spoke of how they felt united with Sudanese people in their goal to overthrow the military, regardless of the violence used against them.

“The night comes and the night goes, every day is like this,” Spidey said. “With the will of God, we still come out. Until today we continue to try to liberate the country but we have no fear. The people of Sudan, all of them, will continue to face the security forces and their bullets.”

At least 95 people have been killed in the protests since October, according to the Central Committee of Sudanese Doctors, a pro-reform group which has also warned about the increased use of shotguns on the crowds by security forces, causing high numbers of casualties.

According to film-maker Phil Cox, Spidey has become a representation of the atmosphere in the country. His distinctive suit seems to energise protesters around him and symbolises the resistance, while his teaching work was galvanised by the 2019 movement, like many other social and cultural activities.

“It was pretty amazing what people were doing – digital start-ups, creative collectives – but they’re now under threat and being closed down by the military,” said Cox.

After the revolution in 2019 was overturned, he said, many of those young activists became angry and distrustful of people in power, including international negotiators.“They feel the attention has drifted and they’re on their own and they’re absolutely not backing down … they trusted, they tried and they think the international community will let them down again.”… we have a small favour to ask. Millions are turning to the Guardian for open, independent, quality news every day, and readers in 180 countries around the world now support us financially.We believe everyone deserves access to information that’s grounded in science and truth, and analysis rooted in authority and integrity. That’s why we made a different choice: to keep our reporting open for all readers, regardless of where they live or what they can afford to pay. This means more people can be better informed, united, and inspired to take meaningful action.In these perilous times, a truth-seeking global news organisation like the Guardian is essential. We have no shareholders or billionaire owner, meaning our journalism is free from commercial and political influence – this makes us different. When it’s never been more important, our independence allows us to fearlessly investigate, challenge and expose those in power.