Tamara Walcott: Powerlifting saved me from myself 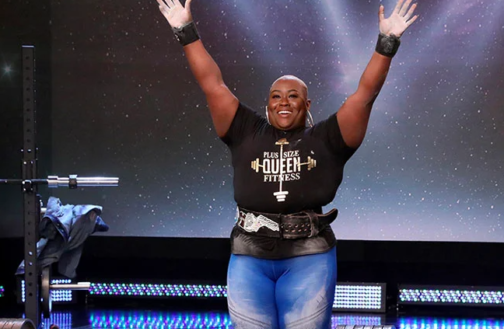 Tamara Walcott can still remember the first time she set foot in a powerlifting gym: the chalked hands, the strapped wrists, the yells and screams as lifters heaved weights off the floor.

As she took in the scene, Walcott’s competitive spirit willed her to try for herself. Soon after, she had a weight resting on her back and was preparing to perform her first ever squat.The spark was instant.

“When I felt that weight on my back, the first squat … I just fell in love because I was doing it for me,” says Walcott.This was in 2017, and at the time, Walcott had already been dumbbell training for a year in a desperate attempt to lose weight. After having kids and going through a divorce, she weighed 415 pounds and was routinely binge eating late into the night.

The dumbbell training and healthier eating habits had already seen her lose 100 pounds, but powerlifting became Walcott’s salvation at a time when her mental health had deteriorated badly.”Powerlifting saved my life,” Walcott tells CNN Sport. “It saved me from myself, saved me from food addiction; it was my therapy, it saved me from depression, and it changed my life.”

The private, deep-rooted significance powerlifting assumed in her life perhaps goes some way to explaining Walcott’s success in the sport.

In July, she broke the World Raw Powerlifting Federation (WRPF) record for the heaviest cumulative lift for bench/squat and press, registering a total of 1,620.4 pounds in the squat, bench press and deadlift at the American Pro competition in Virginia.

In the same competition, Walcott broke her own WRPF deadlift record with a weight of 639 pounds. Put into perspective, that’s roughly the weight of a Dexter cow or a baby grand piano.But years before she could even contemplate lifting those weights, Walcott had to find a way to become accepted into the male-dominated world of power lifting.

When she first took up the sport, she would regularly be the only woman in the weight room, sometimes the subject of side-glances and snickers.

“I remember guys telling me: ‘Don’t bench because women shouldn’t bench. It’s going to change how your chest is, so you shouldn’t bench,'” says Walcott.

“I could hear people saying I wasn’t doing it right. I remember hearing one person say: ‘Why is she in here and not on the treadmill?’ … I stuck to it and just kind of kept going.”

Today, however, Walcott has noticed a shift in attitude and says women are “taking the powerlifting community by storm.” She founded Women in Powerlifting in March this year, an organisation dedicated to increasing female participation in the sport and removing the negative stereotypes around women powerlifters.

For Walcott, who goes by the moniker “plus-size fitness queen” on social media, empowering other women to take up the sport is one of her chief aspirations.

An influential female figure continues to inspire Walcott’s own powerlifting career. Her grandmother, a chef on the Caribbean Island of St. Croix where Walcott grew up, passed away in 2019, and Walcott becomes emotional when recalling her grandmother’s larger-than-life spirit and open-armed generosity.

“When she cooked pots, it wasn’t small pots of foods. It was like she’s feeding the whole community,” says Walcott.

Throughout her powerlifting career, she has drawn strength from her grandmother’s memory, using it as fuel during her most challenging moments. “I was chasing deadlifting 496 pounds for like a year, I couldn’t break it,” Walcott recalls. “And then a couple of months after she passed, I broke it by channeling her energy, saying: ‘I’m going to do this for you,’ you know?

And I was able to lock it out finally.”I remember just being full of emotion. I was crying in the gym. Everyone was looking at me at that moment — everyone was cheering, everyone was clapping … It’s almost like she’s given me her energy or something, I don’t know how to explain it.”

The impact powerlifting has had on Walcott’s life has been wide-ranging, giving her purpose and self-confidence when she needed it most. Central to that has been her changed relationship with food and healthier eating habits.

“I’ll be completely honest — is my food addiction gone? No, I just traded it out for one other thing,” she explains.”Early on, when I first started lifting and training, I remember late at night I used to binge eat when I was heavier, and I said to myself: ‘You know what? When I start having these cravings, I’m going to get down and do 20 pushups or 20 situps, or I’m going to go drink a large glass of water.'”

Walcott’s new lifestyle also involves drinking a gallon (about 4.5 liters) of water a day and ensuring she gets sufficient sleep each night — which can be difficult when balancing workouts with childcare and a full-time job in real estate.

It sometimes means resorting to late-night gym sessions — feasibly finishing close to midnight — and catching up on sleep at any free opportunity. Walcott has even tinted her car windows to help get precious shuteye during the day.”I make it work,” she says. “Motivation has died a long time ago for me. All this right now, it’s pure dedication.”

Walcott now plans to take a break from competitive lifting. She struggled with arthritis in her knees earlier this year — to the point where she could barely squat and was reduced to hobbling up and down stairs just weeks before her record-breaking lifts in July.

She talks about perhaps competing at an international event at the end of next year, but for now is committed to her “My Strength is My Sexy” gym tour, where she is sharing her powerlifting journey at gyms across the US.

That’s not to say she’s lost sight of her competitive targets. She’s spoken to her coach, Daniel Fox, about the goal of lifting “747” — a 700-pound squat, 400-pound bench press and 700-pound deadlift. “Don’t that sound good?” says Walcott. “I’m a big manifester; I am big on putting things into the atmosphere, just letting it grow and saying it out loud.”

Setting — and surpassing — her own targets has been Walcott’s style ever since she first walked into a powerlifting gym five years ago. She never looks at who else is on the roster at competitions and hates being told how heavy a bar is before attempting a lift.

“I don’t want to hear all that, it’ll psych me out,” says Walcott. She competes for herself, all her drive coming from within.”Right now, it’s just me versus me,” she says. “I’m challenging myself to be better every single day — I think I love that aspect of it.”

Boko Haram crisis: Nigerian women try to save their children