The miracle of our separation – Conjoined twins, Ervina and Prefina 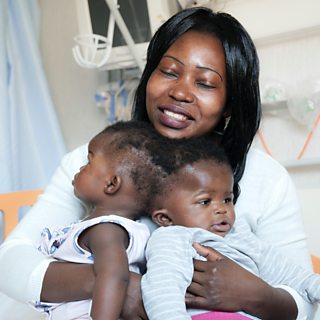 Born in the little town of Mbaïki in the Central African Republic, conjoined twins Ervina and Prefina Bangalo had no hope of ever seeing each other or living a normal life like every other kid would.

The mother of the twins, Ermine Nzotto, who unfortunately had no prenatal care when she was pregnant with the girls did not even know she was going to have them, much more conjoined ones.

Ervina and Prefina Bangalo were born with the back of their heads joined together. Their chances of surviving were incredibly low.

The Vatican by the instruction of the pope had plans to open a hospital in Bangui, the capital of CAR in order to help the people of the country. Italian doctor Mariella Enoc, who was leading this initiative as ordered by the pope, happened to visit the paediatric hospital where the twins were being kept and instantly fell in love with them.

‘I visited the hospital in Bangui and I saw a lot of malnourished children. Children who had malaria and HIV were having to share the same tent. It was very heartbreaking. And then I saw the twin girls, just five days old. I immediately fell in love with them and I knew I wanted to help them. I was told at the time that a simple cold could even kill them.’

With this, Dr Mariella Enoc decided to take the babies and their mother to the Bambino Gesù Children’s Hospital in Vatican City where she was sure they could be helped.

In the Bambino Gesù Children’s Hospital, Dr Enoc spoke to pioneering neurosurgeon Dr Carlo Efisio Marras about being able to separate the twins.

Dr Marras who from here on took over the case says he was immediately interested after he was briefed on the condition of the girls, but he knew this was not going to be an easy task.

‘I read a lot about surgeries like this in the past and in all of history, there has been on four of them. Very few papers even talked about the occurrence. These four did not even yield good results. Two of the surgeries ended with the children dead and in the other two, the children were left in a vegetative state. This really meant the stakes were very high on the surgery but it did not mean we could not do it.’

Well, in a span of two years, Dr Marras and his wonderful team at the Bambino hospital did manage to separate the twin. First they had to start with therapy, to help the girls walk. When they arrived in Italy, it could be sensed that their cognitive development was slightly impaired and Dr Marras hoped therapy would yield some results in this regards.

True to his word, the twins started to walk on their own after months of therapy. ‘It was interesting because when they gained function, each baby wanted to be on her own. One would move forward as the other moved the other way. It was very interesting to watch them.’

Another problem needed to be solved before surgery. The fact that the girls had never seen each other before. Dr Marras says they employed the use of mirrors to slowly introduce the girls to each other and have them identify each other. This would come in very handy, later after the girls were separated.

Dr Marras and his team were now ready to separated the girls. They were to undergo three major surgeries over the next couple of months and these surgeries were life and death instancies.

The first two major surgeries were conducted to separated the major veins in the girls brains. This was to give each child one major vein in order to boost their survival rates.

‘Our first two surgeries were very important. We had to give each girl an equal chance and opportunity of survival and hence we decided to give them one major vein each and carefully separate the other veins among them. We did this carefully and meticulously and it was a success.’

The last surgery on the girls, which took a team of 30 people to complete, was to separate the skull of the girls and also to cover the skin.

‘We had to expand the skin first for about 3 months to ensure we had enough skin to cover the skulls after we separated them. When this was done, we were finally ready to separate the girls.’

After 18 long hours of surgery, the girls were separated in June 2020. Ervina and Perfina were finally able to look into each other’s eyes. Dr Marras says the moment when the skulls came apart was a moment of mixed feelings. ‘The entire room when silent and we just paused for a while and everyone just started clapping. We were all just so happy that we had done this. It was a moment of great victory for all of us in the operating room.’

Both girls are recovering very well after the surgery and Dr Marras reports their love for music and dancing has not waned in the least. ‘Just play music with your iphone or whatever it is and they will immediately start dancing to it.’

Dr Enoc did not exclude herself from the entire process. She was there with them every step of the way as she had taken a particular liking to the babies.

‘Everyone involved in their care immediately fell in love with them because they are very adorable babies. Even after the surgery, Dr Marras approached me and started to talk about how we need to make plans to cater for their education and all. He seems to have adopted the babies already.’

Through all of this, their mother, Ermine Nzotto, had had just two wishes, for her children to come out alive and also to have them baptised by the pope.

Well, by the miracle of their survival and existence, the girls have been baptised by Pope Francis and the Vatican is looking to employ Ermine to work as a translator in the hospital they are building in Bangui.