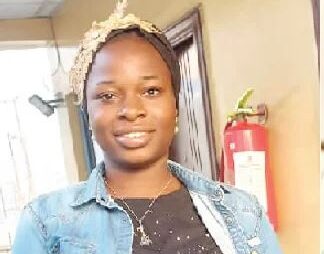 I graduated in 2021, I started the process of getting my certificate and because of that, I travelled from Oyo State, where I reside, to my school in Ilorin. I was told that something was wrong but that I would get it. I finally got my certificate in March 2022.

I wanted to register for the National Youth Service Corps (NYSC) programme, as mandated in Nigeria, so I visited a cyber café close to my house for registration; I tried logging in with my details, which included my name and matriculation number. But I discovered that my details, including my name, and matriculation number were used to mobilise another person. The details revealed that the person was already using my details to serve in Oyo State.

The impostor’s passport was on the document that carried my name and I sent the document to a friend. My friend helped me to identify the impostor as one Grace. I searched ched for Grace on Facebook and discovered it was the same person’s picture on the NYSC portal.

My name appeared but the phone number wasn’t mine. I noticed that the person used another email address instead of mine. My email address was probably changed.

The café operator asked whether I gave out my details to some close friends. I was shocked because I didn’t give out my details to anyone as I just got my school certificate in March this year. It is really amazing because nobody knows my password. He later advised me to go to the students’ affairs unit at my school and lodge a complaint. I met an official there, who directed me to write a letter to the registrar indicating that someone was using my full name and matriculation number to serve at the NYSC camp in Oyo State.

I wrote a letter to the school and I was called to explain my situation. I narrated my ordeal, but there hasn’t been a solution since then. They told me that the NYSC had not responded to the school’s letter and mails regarding my problem. I was only told that it would be sorted and advised to stay calm. I have been to Ilorin several times since it happened, but the school has not done anything about it.

I was so speechless and confused that I burst into tears at that moment. I couldn’t think clearly. I was wondering how possible it was for someone to use my matriculation number. The operator of the café was just consoling me. He advised me to go and lodge a complaint in my school. He said crying would not solve the situation. I was just confused and dumbfounded, and was just wondering how all these were possible.

It is a worrisome situation that made me feel extremely down. I am only trying to make myself strong. It’s not been easy. I want to serve; I seriously need the NYSC certificate, because it has been requested at my place of work.

Although my dad is late, my mum also tried her best. We both went to my school in Ilorin. We even went to the mobilization center at Ogba in Ikeja, Lagos. She has been troubled as well.

It actually made me see life from another perspective that anything can happen, especially in Nigeria. I am trying to be fine. Even when I don’t want to think about the situation, I still do. I am only trying so hard to put myself together and try to concentrate on other things.

Her father went to prison – so she went to law school