Her father went to prison – so she went to law school 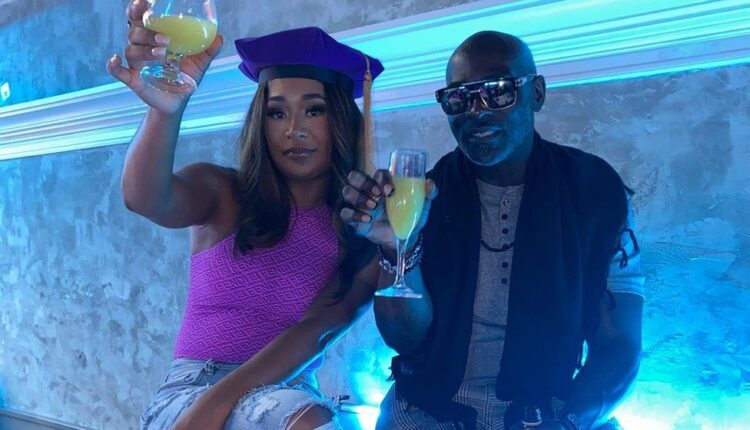 The first time Teeanna Brisco saw her father after he was released from prison was just before her law school graduation, when she picked him up from the airport.

Bernard Brisco had been imprisoned for 20 years for non-violent drug crimes, sentenced in 2001 for selling cocaine. His daughter was just four years old.

Mr Brisco, now 53, was given the lengthy sentence because of the so-called “three-strikes” sentencing law. Under the policy, which was implemented in the US in 1994, judges had to mandate life sentences for certain repeat crimes.

This was only changed at the federal level in 2018, but many states still have it in place.

Because he had had prior drug offenses, Mr Brisco was given a mandatory life sentence plus 240 years.

In the US, a life sentence is living out the remainder of your life in prison.

And with that, her father “immediately went to a super maximum facility in Indiana,” recalls Ms Brisco, now 24.

It was her father’s harsh sentence that partly inspired her to go to law school. Celebrating her recent graduation with him finally created “a sense of normalcy,” she says.

They focused on all the firsts. It was the “first time I picked up my dad from the airport, and the first time he’s been in the car and his daughter’s driving,” Ms Brisco tells BBC.

“I’m just really grateful that he was able to be there.”

His daughter’s graduation was “something a father can never forget,” Mr Brisco says.

“My paperwork said I will be released when I was deceased. So to be a part of that moment with Teeanna was like a dream”.

Ms Brisco was so young when her father went to jail she doesn’t “remember him ever having been free,” but she does remember her family being open about where he had been sent.

Her mother made it a priority to ensure the two kept in touch.

“I could always write him, [my mom] would always answer the phone when he called. Definitely a lot of involvement. He got every copy of every report card mailed to him.”

But when she was younger she didn’t always tell people about where her father was.

“I remember always saying that he was a construction worker. Like that was my go-to lie that I would tell people – so there obviously was shame and feeling like people might see this as a reflection of who I am”.

But her attitude changed by the time she was in high school, and she began to see what she thought was the “injustice” of his incarceration, and became “eager” to share his story.

Around that time, in 2012, the country was gripped by the story of Trayvon Martin, an unarmed black teenager who was shot by a “neighbourhood watch volunteer”.

The shooting sparked a fierce debate about racial profiling in the US, and Ms Brisco says she started to “see how interconnected things are, like law enforcement, the judicial system, the prosecution system – all of these different things”. She started to feel compelled to learn more, she says.

According to the National Association for the Advancement of Colored People, black Americans are incarcerated five times more than white Americans.

And data from California revealed black people in the state were 12 times more likely than whites to be imprisoned under three-strikes laws, according to the Center for American Progress.

Understanding the disparities made her feel “very passionate about fair sentencing reform,” Ms Brisco says. “There’s still so many people in similar situations as his [her father’s] – it’s not an isolated incident”.

Much of her motivation for law school also came from her younger relatives and the desire to “change the trajectory of the family” and to show them that “we can have something positive out of the experience that we’ve had to go through.”

And when she crossed the stage at her law school graduation from Howard University, a prestigious historically black college in Washington, D.C., her father was a finally able to celebrate the milestone with her.

Last year, 20 years into his life sentence, the Federal Defender Services of Wisconsin filed a motion for Mr Brisco’s release.

During that time, he had been a model inmate and father, according to his daughter. He completed over a hundred vocational programmes and went back to school.

The judge who had sentenced him in 2001 was the same judge who granted him compassionate release two decades on.

“I was on a different path to, like, right my wrongs, make some corrections in my life, and try to prevent other young men from making the mistakes me and so many other men made,” Mr Brisco says.

His daughter has accepted an offer with a law firm in Washington. To whatever extent Ms Brisco can, she says she “will happily be taking pro bono cases” to help people fighting unfair jail sentences for free.