The island nation of Madagascar has a dubious accolade: it is the world-leader in deforestation. Now, some of the island’s teenagers have started a farming revolution – working to stop food production from destroying the island’s rich rainforest.

The bridge across the river to Mangabe has collapsed. Probably many years ago. Just a few wooden stumps now protrude from the murky water separating densely forested riverbanks. The only way across is on an unnervingly wobbly canoe.

We crouch low – backpacks at our feet – gripping the sides of that canoe as it is expertly steered across the water. We are less than 100 miles from the capital of Madagascar, Antananarivo, but this is a stark reminder of just how remote the communities of this protected area are. When we have crossed the river, it is still a two-hour walk to Mangabe village.

We’re going there to meet a group of Malagasy teenagers – young famers who are leading a small but vital revolution – transforming how people farm in order save their forest.

Almost 9,000km away in Paris, at a glossy, international gathering, scientists and politicians are finalising an assessment on humanity’s relationship with nature. With its somewhat ungainly title, the Intergovernmental Science-Policy Platform on Biodiversity and Ecosystem Services (IPBES) will publish a seminal upsum of the ecological emergency our planet is facing; humanity’s impact on the natural world.

Life in the balance

There is little doubt that, worldwide, humanity struggles to coexist with other species that inhabit the planet – even some that we are keenly aware that we need. Biodiversity encompasses pollinating insects we rely on for food, trees and plants that provide clean air and water and the network of life underfoot that keeps soil fertile and productive.

It is the network of life – we depend on it.

The global report due on 6 May has the lofty goal of setting out a path to a more sustainable future. But here in Mangabe, communities live alongside one of the richest, most diverse rainforests in the world. They make their livelihoods entirely through farming; here the link between people and the forest is palpable and inextricable.

“If the forest is lost, many things will be lost,” explains Voahirana Randriamamonjy from the Malagasy conservation organisation Madagasikara Voakajy. The diminutive, unstoppably optimistic conservationist has been working with the young people of Mangabe’s communities for the last three years.

“It’s not just about the wildlife. Without the forest, there will be no clean water for people to drink, the soil will lose its fertility and be eroded away,” he says.

“The forest even provides medicine,” she adds. “It takes hours to walk to a doctor from these villages, so people rely on natural remedies that grow here.”

As well as being our hosts and guides, Voahirana and her team are here to meet with and to train the teenage recruits as part of their “Youth for Lemurs” project. This community-based mission sets out to provide the new generation of farmers with the skills, knowledge and tools to be able to grow their food without destroying the forest.

Traditionally, Voahirana explains, forest destruction and farming go hand in hand. “The old method is often called ‘slash and burn’ – cutting down a patch of forest and setting fire to it. Ash makes a good fertiliser.”

But when the nutrients in the ash are used up, that cycle of slash and burn starts again. “It causes a great deal of deforestation here in Madagascar,” says Voahirana.

That has contributed to a dubious accolade; Madagascar is the world-leader in deforestation. In 2017 alone, 500,000 hectares were cut down – half a million football pitches of rich, diverse rainforest. Gone.

The situation has become so dire that a group of Malagasy and international scientists have come together to urge the new government here to take steps to preserve the country’s famous biodiversity.

“Madagascar’s irreplaceable forests are burning and there are species threatened by the pet trade which will go extinct in the next few years if things don’t change,” explains Prof Julia Jones from Bangor University, UK, who led that study.

“The link to human well-being is often less clear for biodiversity loss than it is for climate change, but effective conservation is essential. If Madagascar lost its lemurs, its forests, its coral reefs, it would be so much poorer.”

It is that pattern of destruction that the young people of Mangabe are now working to break away from.

Mangabe forest is officially protected. But looking over its landscape, you can see where farms have bitten chunks out of irreplaceable habitat.

Where it is intact, under the shade of its dense canopy, there is a palpable sense of what a biodiversity hotspot it is.

Vines wrap around trees that are surrounded by leafy plants buzzing with insects. As we follow our guides along the path to the village, a nearby tree shakes – an indri lemur bounds quickly away from us. When one of our guides, Emille, gently flicks over one particular leaf, a minuscule, bright orange frog is sheltering beneath.

It is a golden mantella – a critically endangered amphibian that – like so many species here – lives only in Madagascar.

‘If we can do this, people will not cut the forest’

On our first morning in Mangabe village there is a buzz of activity. The community is planning a meeting to welcome the visitors and to launch a new season for the Youth for Lemurs project.

The charity – Madagasikara Voakajy – will recruit and train a new group of young volunteers in 10 villages around the forest; this year, they are starting in Mangabe.

Voahirana, her colleague Harifefitra and the rest of the team will provide the dozen or so new recruits with tools and seeds, as well as the new skills and knowledge.

“They tell us what they want to grow and we give them the training,” explains Harifefitra.

That training consists of how to make compost as a fertiliser and how to rotate the crops you grow to produce a better yield. These modern farming techniques may not appear revolutionary, but they provide life-changing benefits. They enable the same plot to be farmed each season, eliminating the need to move into the forest. And they produce higher yields.

The village has an experimental plot where the the teenagers practise their skills and try growing new crops.

Rows of sweet potatoes are flourishing and there are papaya and lychee trees at each end. When we visit in the morning, this year’s volunteers are busily weeding and pruning the fruit trees. Voahirana demonstrates the right branches to snip.

Nantenaina is weeding around the papaya tree. At 15-years-old, her pensive expression gives her an air of worry that makes her seem older than her years. But when she talks about what she has learned, she is positively glowing.

“I feel very happy,” she says. “By planting just a small surface of land, I can produce high yield. And if we can do this it means people will not cut and clear the forest.

“We have a beautiful forest in Mangabe – that’s why I became involved in this project.”

Her friend, Omega – a gangly, smiling 16-year old boy – shows off his knowledge of just how valuable the forest is.

“It provides the fresh air we breathe and helps the livelihoods of the local people,” he explains.

“If it continued to be destroyed, there would be less water to drink. There would be a loss of habitat for wildlife in the forest, such as the lemurs – they would disappear. They would all die.”

Nantenaina says that, since the project started three years ago, older villagers have started coming to the young pioneers for advice about their methods – wanting to understand how they achieve their higher yields.

“The future of the forest, says Voahirana, “depends on these young people”.

“They have these new skills, which they can teach to their kids. So the next generation will be able to farm sustainably.”

As Madagascar’s recently elected president, Andry Rajoelina, begins a five-year term of office, scientists and conservationists who have spent decades studying and protecting Madagascar’s natural habitats hope that this will be a turning point. They say this is the last chance to prevent habitats and species unique to this island nation from being lost forever.

“In a place like Madagascar conservation has to be very careful to ensure that it doesn’t have a negative impact on poor rural communities whose livelihoods depend on using natural resources,” Prof Jones stresses.

“It has to be about people and about tenure. People at the forest frontier need to have their rights to agricultural land respected.

“If you had an allotment and you’re told you only have it for one year, you’re not going to invest in its future – improve the soil and put in fruit trees or asparagus plants. You might just grow a few lettuces you could eat that year.” 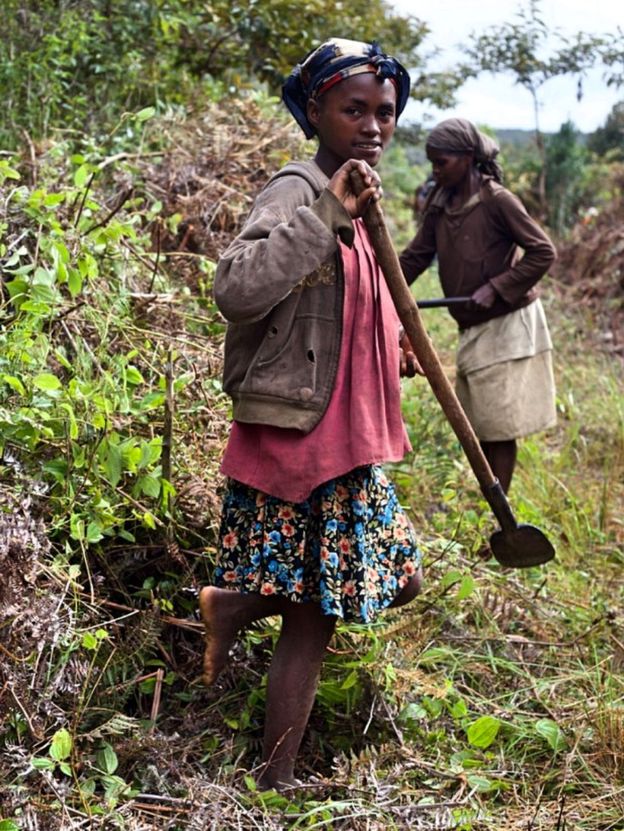 Professor Jonah Ratsimbazafy, from the University of Antananarivo and one of the paper’s co-authors, added: “The United States have the Statue of Liberty, France has the Eiffel tower…. For us in Madagascar, it is our biodiversity – the product of millions of years of evolution.

“It is the unique heritage we are known for around the world. We cannot let these natural wonders, including 100 different types of lemur found nowhere else, disappear”.

But however much people want to protect the forest, adds Prof Jones, “they need to be able to feed their families. Shifting towards more productive forms of agriculture can be beneficial for people and for the environment.”

But as much as the teenagers of Mangabe are working hard to save their forest, the youngest, poorest people simply do not have the power and resources to drive change in Madagascar.

“If people want a world in which lemurs [live], people in richer countries may well need to be willing to help cover some of the costs of protecting that forest,” says Prof Jones.

“This involves supporting organisations such as Madagasikara Voakajy to do what they do.

“They work on a shoe-string, protecting some of the most threatened species on the planet by working with some of the poorest people on the planet. I personally feel they deserve our support.”

‘We’re proud of our forest’

On the morning that we leave Mangabe village and head back through the forest towards the river and that wobbly canoe – we hear indri call. It is a haunting song that seems to fill the entire valley.

“We’re very proud that the indri live here,” says our guide, Dore. He is Mamtemaima’s father and he was born and raised in Mangabe.

“They are like a clock for the local people – they know what time it is when they hear them sing.

“In other places, the forests are being cut down, he adds. “But not here. Here we preserve the forest because it gives us so many things that improve our lives. We’re so proud of the rainforest.”

Lion Mama: The woman who fought off her daughter’s rapists