Black Blues Brothers: From meeting at a charity to performing for the Queen and Pope 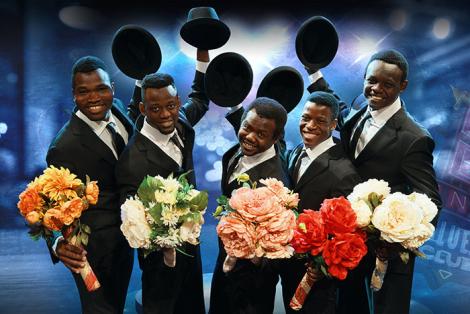 A group of five Kenyan acrobats, Black Blues Brothers, have performed their way into the books of history by showcasing exceptional skills that attract multitudes.

The Blues Brothers attribute their name and performances to the famous 80s movie demonstrating strength, agility, and comedic timing on stage.

They met at Sarakasi Trust, a charity organization based in Nairobi that mainly trains creatives and artists of all kinds by providing them with the tools they need to grow and manage their careers.

“Sarakasi helps young people coming from difficult social situations to emancipate themselves through art and circus. They met each other there and started practising together.

“We learned the social impact of the circus on their life and decide to share these powerful instruments with other people,” they stated in an interview.

Little did they know what they had been taught over the years at the arts development organisation would change the course of their lives.

After leaving Sarakasi, they continued training for five years before deciding to show forth their skills; a decision they haven’t regretted to date.

Throughout their journey, they applied the lessons and values they learned back at the charity. This has helped them to accomplish numerous feats in their career.

“The school taught us discipline, about being professional and punctual, working hard and respecting others. This isn’t a job for us – it’s a passion.

“Even when the five of us are fasting during Ramadan, we still perform with the same energy every night. We might lose a bit of weight, but the energy levels stay the same,” the Black Blues Brothers remarked.

The acrobat is popular for incorporating musical components, a repertoire of human pyramids, stunts, somersaults and even virtuosity of the body in its acts.

Their impressive performances have paved the way for them to travel the world to entertain millions of people.

The Black Blues Brothers have performed for Queen Elizabeth and the Royal Family, Pope Francis and other dignitaries.

The Kenyan acrobats have now performed to more than a quarter of a million audiences across 500 dates in over 200 cities around the world.

Later this year, the Black Blues Brothers are set to perform at the New Theatre Royal in Lincoln, in a nightclub reminiscent of New York’s famous Cotton Club.

My journey with HIV has been good, bad and ugly