The Catholic Archbishop of Abuja has warned Nigeria’s leaders are making the country “uninhabitable”, causing young people to migrate illegally to Europe.

Cardinal John Onaiyekan said that if he were the president he would resign.

He criticised officials for focusing only on their own lives – building mansions and travelling the world.

The 75-year-old cleric said he felt ashamed when he saw trafficked Nigerian women soliciting on the streets of Rome and other Italian cities.

Cardinal Onaiyekan was speaking to the media ahead of a church gathering to address migration, taking place in the Nigerian capital on Tuesday.

In February, President Muhammadu Buhari won re-election in Nigeria, Africa’s largest oil producer where about a quarter of the working age population is unemployed.

Many thousands of Nigerians have attempted the dangerous journey across the Sahara and over the Mediterranean to reach Europe in recent years.

The figures have been declining – from 40,000 arriving in Italy by sea in 2016 to 1,250 last year, but this is partly because of tougher EU-backed measures to crack down on people smugglers.

Many Nigerian migrants come from southern Edo state, which an established base for people smugglers.

Women and girls are often trafficked out of the country after being promised a job opportunity – but many are forced into prostitution. 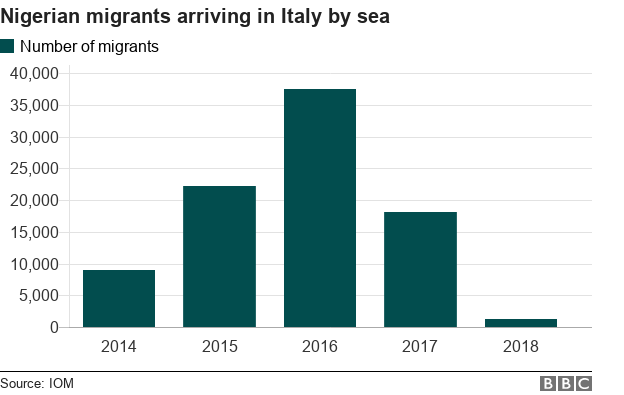 “To tell you bluntly I’m ashamed, I’m ashamed – big cardinal from Abuja, I’m moving through the streets of Rome, Milan, Naples and I see my daughters on the street on sale,” the cardinal told the BBC after the press conference.

“I’m ashamed and I stop and even greet some of them – you can’t even engage them in conversation because they were brought out of the village illiterates. All they learn and all they know on the streets of Italy is what they need for this business – I’m ashamed.”

The senior Catholic cleric hit out at Nigeria’s politicians, saying if they had no vision on how to develop the country and provide adequate security they should not go into politics.

He urged the government to “repair Nigeria” so that instead of young people emigrating, tourists would flock to the West African nation and Nigerians could travel with dignity.

Nigeria is the continent’s most-populous nation – and a deeply religious society, with mainly Muslims living in the north and Christians predominately in the south.

The Haitian Voodoo festival that celebrates the revolutionary war and Africa