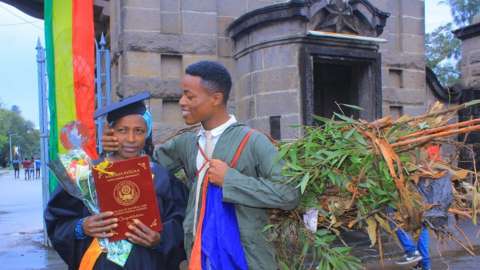 An Ethiopian student who carried firewood during his graduation in honour of his hardworking mother now has a job offer for his good gesture.

Images of Ephrem Belete, a graduate of computer science at Addis Ababa University, paying tribute to his mother went viral in Ethiopia over the weekend.

Right after his graduation, he put his cap and gown on his mother while he carried a bunch of firewood – signifying the work she did for years to be able to get him to school.

It is something that made her cry, which Mr Ephrem said were “tears of happiness”.

“I did this to give credit to my mother. My life is just one among millions of Ethiopians,” he told the BBC.

The video of him honouring his mother was shared widely and received applause from people across social media.

On Monday he got a job offer from Ethiopia’s Information Network Security Agency, but turned it down as he will be doing something else for the youth in Ethiopia.

Mr Ephrem believes what he did to honour his mother will be a lesson for many young Ethiopians who might overlook helping their family.

I never use my real name