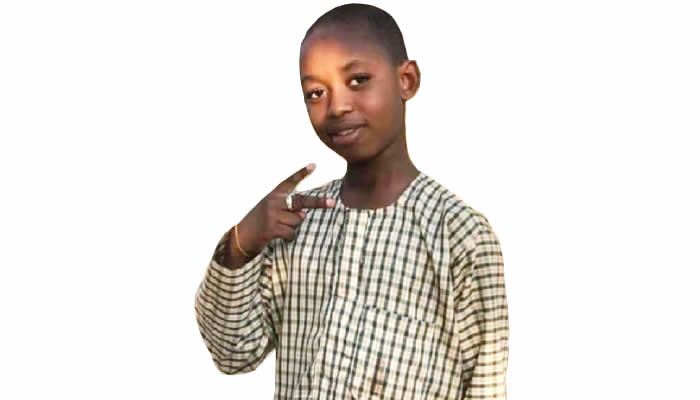 Jubril’s father is dead but he has a stepfather, to who his mother later got married to. He has an elder brother and a kid sister. Both of them are schooling outside Borno State. He lives with his stepfather, his mother and two step-siblings.

The incident happened on Saturday night (January 15, 2022) in his school but we got to know on the evening of Sunday (January 16, 2022). His stepfather was called and told that Jubril was injured and was receiving treatment at the hospital. His stepfather immediately left for Maiduguri because we live in Damaturu (Yobe State). But before the stepfather left he told Jubril’s mother about the call and she also left for Maiduguri immediately. That was how we knew about the incident.  But the school still hasn’t explained to us how it happened.

We have not been able to get first-hand information from Jubril on what exactly happened because of his present condition. And the school management, till this moment, is yet to brief us on what really happened to the boy.  But what we heard was that a senior student in the Islamic college slit Jubril’s throat at night after night prep.  We were told that his throat was slit with a razor blade but Jubril told us that he was cut with a knife and not a razor blade, as being speculated. When he began to talk on the hospital bed, he confirmed that it was a knife the senior student used to slit his throat.

Everybody that heard about the unfortunate incident was alarmed because the boy is very humble and obedient. He is a boy that never looks for or foments trouble even among his peers.

The mother was down and demoralised when she heard about the incident. She and the boy are very close, so the news shook her so much that she almost became unconscious. She couldn’t talk; she couldn’t do anything, not even eat. As we speak, she is still devastated about the whole thing. When she came and saw him lying critically ill on the hospital bed, she became more apprehensive as she never expected to see her son in the state she saw him. She has never been sick before neither has she had any history of health challenges, it was the news of the incident that destabilised her. The cut was deep and it was nothing short of the grace of God that saved him.

At the moment, we cannot even mention the name of the school to him because he doesn’t want to hear that at the moment and mentioning the name may push him into violent reactions or even make him have psychological trauma; so we are being careful with that.

The accusations that the school attempted to hide this incident may not be untrue because the school told people that the boy was slit with a razor blade but Jubril said it was with a knife. I believe the school has the full picture of what happened and should have been open enough to tell the public that it was a knife the said senior student used in slitting the boy’s throat and not a razor blade. The school, up till this moment, has not given the family a comprehensive detail of what transpired that led to the slitting of Jubril’s throat, we are still waiting for their explanation but the most important thing for us now is to see the boy get well and be back on his feet. We also heard that there had been such ugly happenings in the school in the past which were not reported by the school management. So, we cannot rule out that the school made efforts to conceal the crime considering their communication with the family.

We, as a family at the moment, are more interested in the health of Jubril than anything else.

The school has, however, taken responsibility of all hospital bills. They are paying for everything. Whatever is demanded is being taken care of by the school management.

We are expecting nothing but justice for Jubril. We expect the security agency and the school management to do justice based on the facts on the ground. Should the case not go as we expect, we, as a family reserve the right to take up the case further until justice is served. We cannot let this case die just like that. There has to be some punishment for the offender and the family will ensure that is done.

Asma’u Murtala is a cousin of an 11-year-old junior pupil of Elkanemi College of Islamic Theology, Maiduguri, Borno State Jubril Mato, whose throat was allegedly slit by a senior pupil.

Jubril has been successfully operated on by medics of Nizamiye hospital in Nigeria’s capital Abuja.

The second and the latest surgery came a month after the minor was discharged from the University of Maiduguri teaching hospital (UMTH) where he underwent his first treatment that later developed complications.

Medical reports indicate Jubril Mato has vocal cord paralysis arising from the poor healing of the injury. This means Jubril will not be able to talk until the problem is corrected.

Eating with Big Yasa in Kibera