Eating with Big Yasa in Kibera 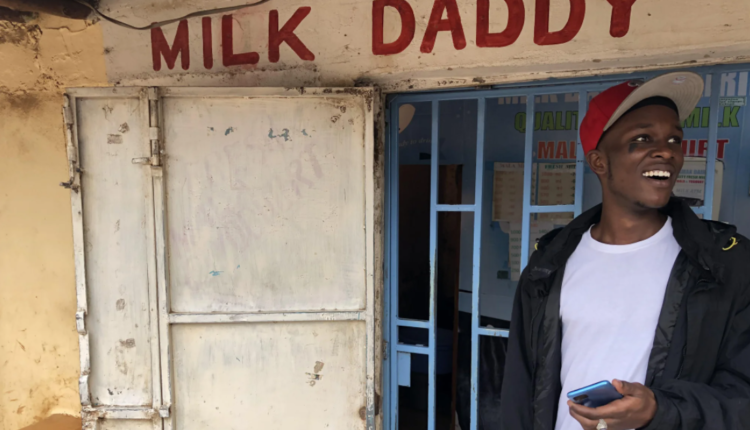 Kibera, with a population of only about 250,000 people, is one of Nairobi’s most notorious urban informal settlements. Plagued by intermittent electricity and barely any access to running water, inhabitants of Kibera dwell in mud houses with corrugated iron for rooms.

Rising star of Kibera, Big Yasa, grew up in Makina, the Nubian Muslim-majority neighbourhood. To him, Kibera is home and the 19-year-old radiates the aura of a star as he walks through the neighbourhood and responds to cheers and chants from the streets.

Speaking about his favourite foods and spots in the neighbourhood, Big Yasa says, “If I left the area, I would always come back for this,” plunging his fingers into a plate of Swahili-style chicken biryani, a mild coconut milk-based curry that steams in the way comfort food should. “People think of Kibera as a scary place ‘cause it’s a maze here – you just need to know which corner to turn.”

“Apart from my grandmother’s, this is the best there is,” Yasa says, as he peels a banana that until now has sat untouched on the plate curved around the food from Eight Town Cuisine. The fruit is then mixed with fingertips into the small mound of rice that remains. Here, the main dish merges into dessert as the scraps become sweet pudding.

Mamu’s Ice Cream Parlour is just around the corner. They don’t offer ice cream anymore, but they’ve always been Yasa’s favourite spot to acquire samosas, a triangular fried pastry snack popular in Kenya. In a paper bag, the seller places sausage meat that has been deep-fried in flour. It’s an ecstasy of deal-sealing fat that dissolves in hot oil, as well as onion and parsley. “She’s known me here for a long time,” Yasa says.

At the heart of Makina, next to the mosque, is the Mum Mweretu snack shack. Two young women serve up deep-fried potato bhajia, large fluffy pancakes, and fun-sized doughnuts. The pancakes, chewy and sticky, lift spirits the same way drawing clouds with a crayon would. “I have been eating these all my life,” Yasa says, brushing his mouth from doughnut sugar dust, “but what we should do now is Milk Daddy”.

Milk Daddy provides a yoghurt drink that is the ideal soothing agent for a tongue that has been numbed by scorching hot oil. The owner takes his craft seriously, pouring the strawberry and plain yoghurt at 45-degree angles separately. We may eat with our eyes, but you can also slurp with them at Milk Daddy.

Yasa hails a boda boda [a motorcycle taxi] to leave this part of Kibera to go less than half a mile to Fort Jesus for Nyama Choma. “You can’t come to Nairobi and not have goat roasted on charcoal,” he says. He suddenly stops halfway through to move to the next vendor which he considers “the best-fried tilapia in the whole of Nairobi”. Full, fleshy fish are deep frying in sunflower oil in a wok-like pan over a fire. Eating the juicy sides he noted, “I only eat the meaty part. I don’t like the head. They say that if you eat the head it gives you brains,” he shakes his own, before adding, “I won’t eat eyeballs.”

Further down the street, Yasa travels a few blocks to a butcher shop where meat is hung from hooks. It’s connected to a modest barbecue hut. Only the chopping of a hefty blade through blood and sinew, and finally onto a wooden board, interrupts the radio. Strips of goat meat are hung over the fire and then sliced. “You have to salt it,” Yasa exclaims, his fingers searing from the rough meat as he stands and eats.

Yasa, lounges into a plastic chair with the atmosphere filled with heavy BBQ smoke and people moving in and out of the neighbourhood about their regular lives. The star reaches for a toothpick and his mobile phone. “That goat was tough but still juicy,” he says, nodding to himself the way you do when momentary contentment takes over your very being. “I think if I drank beer, I would have one right now,” he says, as he waves over another boda boda to head home.