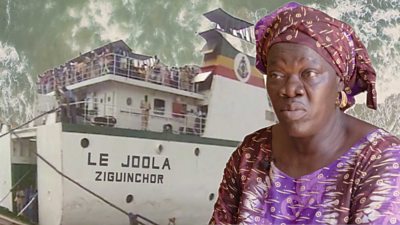 It is something that those who didn’t experience it will never forget, let alone those of us who did. There were 22 of us rescued by the fishermen, but I was the only woman.

It was very, very hard. The night before travelling on the boat, I remember waking up three or four times. When I arrived the boat was full. But when I got to the port, I saw a young man who had left something home. He asked the ticket seller if he could be refunded and I could take his place and that is how I got on the boat.

I saw that those who were lying on mats were sliding towards me. But I didn’t understand what was happening, because it was my first time on a boat. I wondered what was going on and thought it was a normal thing.

I stood up in the dark, confused without anything to hold on to. Mats were sliding around in the darkness. That’s when I felt my feet slipping too. I had given up hopes of surviving and was four months pregnant at the time.

I thought of the child I was carrying in my belly and thought maybe it was God’s will. That I die with my unborn child. Then suddenly I felt my head lighten up, and I knew I was going to come out of the water.

We were all mixed up in the water. Dead people, people in agony, all of us. Everything you could imagine. We were in the water for a long time without help. If we had had help, there would not have been as many deaths.

God knows why I survived. Even now, I feel it every Thursday. It’s as if it were the day of the tragedy.

On September 26th 2002, the Joola, a government-owned Senegalese ferry, capsized off the coast of The Gambia. The Joola operated between the south of Senegal, the Casamance and the capital, Dakar. Over 1,800 people died, only 64 survived. Amongst who died were 444 children.