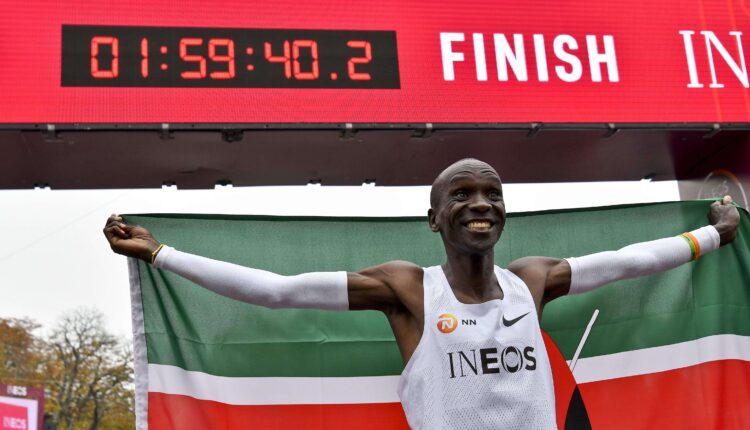 Marathon runner Eliud Kipchoge believes he can get even closer to a possible sub-two hour marathon after narrowing the gap by 30 seconds when setting his recent world record in Berlin last month.

The 37-year-old ran a time of two hours, one minute and nine seconds to beat his previous benchmark, which had stood since 2018.

“I believe that I still have time to show the world how to push limits,” the Kenyan told the BBC World Service.

“I can still run my personal best in the near future. I can still try again.”

He then became the first man to run a marathon in under two hours in 2019, yet the time in Vienna could not be an official world record since it was not in open competition and he used a team of rotating pacemakers, among other measures.

Kipchoge ran the first half of late September’s race in Berlin in 59 minutes and 51 seconds, prompting thoughts that he may become the first runner to break the two-hour mark in an official race.

He had played down his chances of a world record in the build-up, but admits lowering his time had been his stated aim in the German capital.

“My plan was not to run under two hours, my plan was to break a world record,” he said.

“I realise that we are fast enough to run under an hour in a half-marathon, which was really motivating for me.

“And it’s a good sign also that the future is clear. I’m showing the people that you can [go] as fast as you can for the half-marathon and still do something good at the end of it.”

Kipchoge turns 38 next month and now says winning the Olympic marathon at the Paris Games in 2024 is on his “bucket list”.

He was won the past two Olympic titles – becoming just the third person to defend a marathon title when he crossed the line in Tokyo – and a third successive triumph would be a first for a man or woman.

“I trust that all things will carry me well up to 2024 to present myself at the starting line,” he said.

“What I like is history. To be the first human being to run back-to-back-to-back for three times and win Olympic marathon gold medal, it’s my bucket list.

“It’s there in my mind. I don’t know what will happen but still, for now, I want to concentrate on recovering my body.”

“I think we all thought that if anybody was in shape right now to take down that world record, it would be him,” the 48-year-old Briton told the BBC World Service.

“Each year as he gets a year older, the odds are against him a little bit more – and he still manages to defy them.

“He doesn’t put limits on himself. And I think that really helps his mind set. He loves setting himself those targets just to get better, to try and move things forward to move the bar that little bit higher all the time.

“If he gets that balance perfectly right between the first and second half, he can maybe take it (the world record) down even further.”

Already regarded as the greatest marathon runner of all time, Radcliffe says that if Kipchoge were to win a third Olympic gold in Paris it would rank along his sub-two hour marathon as his greatest achievement.

“I think even to get it right for two marathons in a row is hugely impressive, especially given the way the goalposts moved with the Tokyo Olympics,” she said.

“To put it in perspective, it’s getting it right one day every four years, for 12 years. And history shows that that’s extremely difficult to do.

“If anybody can do it, he can do it. But it will be a phenomenal achievement that perhaps would put him on the level with having gone through that two-hour barrier.”

I can change the way Black women are seen – Viola Davis