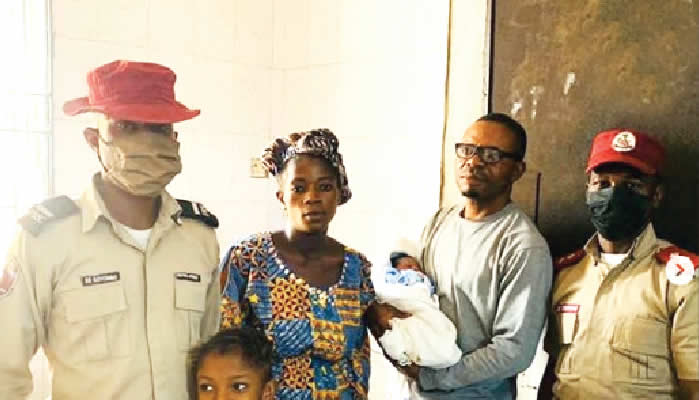 My name is Mrs Esther Olatunbosun. I am an auxiliary nurse living in Sagamu, Ogun State. I will be 37 years old in February. I am a mother of three; I had my third child, a girl, on Friday (January 21, 2022).

It happened around 2:30 pm. I was in traffic on the Lagos-Ibadan Expressway around Olowotedo, some distance away from Mowe. I was in a vehicle on the way to see my doctor. I was coming from home. I was in a commercial cab, a Mitsubishi Space Wagon.

I was with just my firstborn, an eight-year-old girl, and another woman. Then there was the cab driver. I sat in the back seat. It was not my expected date of delivery. The hospital gave me February 14, 2022, as my Expected Delivery Date but the baby came earlier.

On that day, I didn’t even feel anything before I left home. I just wanted to go and see my doctor who had advised me about eating a healthy diet.  My doctor is at Orile Iganmu, but I also registered for ante-natal care at a hospital in Sagamu. If I knew I was going to be having my baby that day, I would have just headed straight for that Sagamu hospital for the delivery. But I didn’t feel anything like that before leaving home.

This was my third experience with childbirth. I gave birth to my first two children in the hospital. In both cases, the delivery did not take more than 45 minutes.

When I started having contractions while in traffic, I panicked. You need to see the traffic, it was very thick, as usual; and considering that the distance I was going to was far from where I was, I really panicked. However, the fact that I am a nurse sort of helped me.

When I observed that the head of the baby had already come out, I quickly removed my pants and asked the other woman in the car to help me hold one of my clothes while I began to push. As a nurse, I know that once the (baby’s) head is out, one needs to be quick to get other parts of the body out. The woman was afraid but I told her not to worry; that she should just help me to hold one of my clothes to cover me because the baby’s head had already come out of my pants. As the woman held the clothes for me, I pushed and the baby came out. My being a nurse was helpful and really aided the delivery because I had the boldness that I could deliver the baby by myself.

When I started having strong contractions and I saw that the baby was already coming out, I alerted the driver and he immediately pulled over by the side of the road.  He then called FRSC officials, who came to help. He also called my husband to inform him that I was in labour on the expressway.

The FRSC officials really did their best for me that day and I really appreciate them. I was surprised when I saw FRSC officials surrounding the car. I wondered if their vehicle was behind ours on the road. They were just godsends. They were many but six of them followed us to the hospital. The driver and FRSC officers stood by me.  They later left and came back to take photographs with the baby.

I was taken to a private hospital, Broad Life Hospital, on Orimerunmu Road, Mowe-Ibafo. It was at the hospital that I delivered the placenta.

The experience shows me that it is good to do good to people. I am grateful for the help that I got; maybe it was because of what I had done for others while on duty as an auxiliary nurse.

When the doctor I was on my way to see was called, he said he didn’t know anywhere he could suggest for me to go. Then the cab driver said I should not worry, he would search for a hospital nearby and he did. So, I am really grateful.

My Disability is not my inability