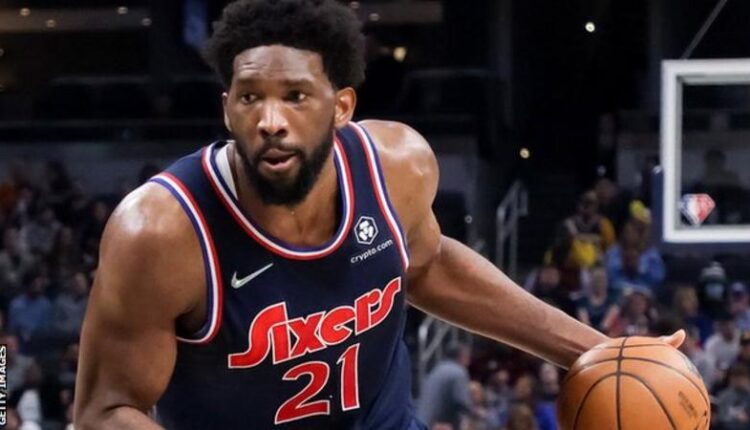 Joel Embiid has already created a piece of NBA history this season, and the Cameroonian centre will now be focused on ending the Philadelphia 76ers’ 39-year wait for a title.

The 28-year-old has become the first-ever international player to win the NBA scoring title, having finished the gruelling 82-game regular season averaging 30.6 points per game.

The Sixers face Toronto Raptors in the first round of the Eastern Conference play-offs, with the first meeting of the seven-match series on Saturday.

“When he’s on the court it’s hard to stop him so I’m not surprised,” Luc Mbah a Moute, a former NBA player and fellow Cameroonian, told BBC Sport Africa.

“The way he’s been playing the last couple years, you could just tell he kept elevating his game. I knew it was just a matter of time for him to get to this level.

“For him to get 30 points a game, it’s a no-brainer with the way he plays and how skilled he is.”

The last time a centre won the scoring title was in 2000, a year when Shaquille O’Neal also won the NBA finals MVP after leading the Los Angeles Lakers to the championship.

Since no African-born player has previously taken the accolade, this is a huge achievement for the continent bearing in mind that Embiid is now mentioned in the same category as past winners like Michael Jordan, the late Kobe Bryant and O’Neal.

“I think it’s an inspiration for all the younger guys [in Africa] and that’s what we’ve always wanted,” Mbah a Moute said of Embiid, the first centre since Moses Malone in 1981-82 to average at least 30 points per game.

“What he is doing and what it means for all international players – and particularly African and Cameroonian players – is great.”

Former 76ers superstar Allen Iverson, an NBA Hall of Famer and the last Sixer to win the scoring title 17 years ago, was in attendance on Sunday as history was made, although Embiid sat out the final game of the regular season with a place in the play-offs already secured.

Born in the Cameroonian capital Yaounde, Embiid is a great defender and arguably the most dominant player in the NBA.

Mbah a Moute, who began his career at the Milwaukee Bucks and had a stint as a Sixer in 2014-15, has been pivotal in the growth of Embiid’s career, having discovered him at a basketball camp.

Embiid initially played volleyball and football with the aspirations of playing volleyball in Europe, only picking up basketball aged 15 – considered late for someone with any intentions of rising to the top of the sport.

Yet Embiid has excelled, playing a style similar to the great NBA Hall of Famer and Nigerian centre Hakeem Olajuwon, and was the third overall pick by the Philadelphia Sixers in the 2014 NBA draft.

A complete player with a swathe of great post moves, he stretches the floor with his shooting from the perimeter, creates mismatches, attracts double-teams and puts opposing centres and forwards in trouble.

His early career was affected by a myriad of injuries while the Sixers were one of the worst teams in the league, albeit with a nucleus of young talent led by the Cameroonian.

Despite being sidelined, Embiid endeared himself to Sixer fans by encouraging them to “Trust the Process”. He in turn has been nicknamed “The Process”.

“I think last year he was just as good, because he was right there with [Denver Nuggets centre Nikola] Jokic in the race for the MVP,” Mbah a Moute, 35, added.

“I think he got hurt a little bit at the end [of the season] and that’s kind of where he didn’t win it. He’s been playing great the last few years.

“He’s just got to be healthy and be on the court. Ever since he turned a corner, I knew it was just a matter of time before he got MVP or got to this level. I am very proud and happy for him.”

A charismatic player and a trash talker, Embiid is becoming a player with a profile on the level of Kevin Durant, LeBron James, Steph Curry and other elite NBA stars.

With the addition of James Harden, a former scoring champion, can the 76ers – with Embiid – lead the team from the city of brotherly love to the NBA title? Game on.