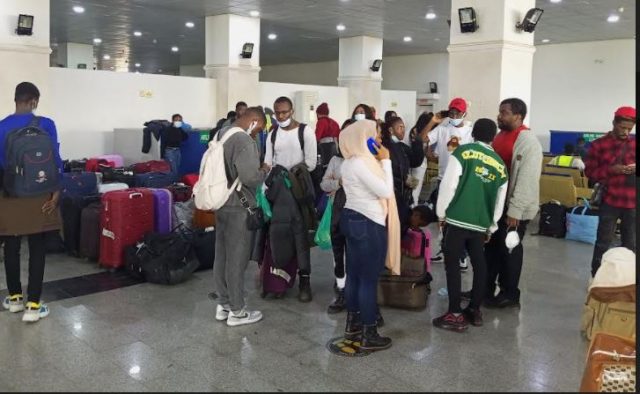 Despite the United States’ warning of the possibility of a war, I wasn’t really bothered about it and I really doubted the fact that there will be a war in 2022.

I thought it was some kind of (empty) threat to bring Ukraine into submission and that there was no way such a thing could happen in 2022. It’s something that is hard to imagine, and when Putin said he had already withdrawn his troops and had no intention of fighting, I thought; oh, I guess I was right after all.

The first thing that came to my mind was to take my documents and my winter jacket. Those two things were as important as my life at that moment. Despite the fact that I saw the bomb drop and I heard it loud and clear, I was still able to compose myself enough to take the important things I knew I was going to need. Seeing that it was real, I felt I should have travelled back to Nigeria when my dad and my friend suggested it. I had to get out of the country as soon as possible so as not to get caught in this mess, in case it escalates. There was regret when I remembered declining my dad’s offer to buy me a ticket to go back to Nigeria and my friend’s offer to let us go come home together. I had the determination to get out of it alive and well and I think these three things were what gave me the strength to endure and push through.

I never said my last prayer, that never crossed my mind. I knew I would survive it, and I prayed to God for protection, coupled with the prayers of my parents and the pleasant wishes of my friends. I was oddly convinced that I wouldn’t go with this war.

It was the most stressful thing ever. It was mentally draining and emotionally exhausting. It was the most overwhelming thing that has happened to me. It took us a total of four to five days to get to Hungary from Kyiv. There were several bombs and shooting scares which made everyone start looking for shelter. This particular experience is something I want to avoid talking about in detail because I want to erase it completely from my mind. I had a traumatising experience getting the first train from Kyiv to Lviv. My chest tightens whenever I remember. I’ll stop here (sobs).

We had to stand for at least five hours. At the Ukraine-Hungary border, it took us 12 hours before we could get on the train to Hungary. From Kyiv to Lviv, I missed two trains despite the fact that I was there in the morning. I finally got on the train in the evening. It was all about survival of the fittest. We went through a lot, I can only summarise things as much as I can.

I initially thought of going to Poland because it was the closest to Lviv but I changed my mind multiple times. It was more advisable to walk in a group than individually, so as I changed the group I was with, my choice also changed. I decided it was best for me to go to other borders that were not as occupied as Poland because everyone was heading to Poland. My decision was to go to Slovakia, but the Slovakian border seemed almost impossible to cross, so we decided to go to Hungary since it was also close to the Slovakian border.

Getting food to eat was also one of the most difficult things. We had other things occupying our minds to even remember to eat. After leaving Kyiv, two days had already passed before I remembered that I had not eaten anything nor had I drunk water. In normal situations, that is close to impossible for me, but my survival was more important. One day felt like one week and it seemed like this struggle had been on for months. I had some biscuits to eat after two days, some of my friends got bread and water and we were able to eat. We were not satisfied but it was enough to keep us alive. Not having a bath for more than four days and brushing after two days or three days of running around, I’ve never felt any filthier in my life. I was disgusted with myself but there was no time to think about stuff like that. I had a mission to rescue myself from that country.

If you have seen the video of people trying to get on the train, I tell you, it’s 10 times worse in real life. Crossing the border was just as difficult as trying to get yourself into the train. The guards/officials prioritised whites, women, children. They just did what they felt was right and honestly, I didn’t have the strength to complain either. Like I said earlier, it was almost impossible to get across the Slovakian border and that was why I went to Hungary. It was also difficult and there were times I almost passed out due to lack of oxygen. I was lucky enough to get on the train at the Ukraine-Hungary border and getting into Hungary has been the best thing to happen to me these past few weeks. Everyone has different experiences, some still find it difficult to get through the border, it wasn’t easy for me as well but I got in and that’s all that matters.

I would say there are many Nigerians still stranded in Ukraine, especially those cities that are currently under attack. I have a classmate who is still stuck in Kyiv with three other people due to the bridge that was destroyed. There are lots of people who need help and they need to be evacuated as soon as possible. I don’t know much about other borders but more Nigerians are still coming into Hungary and I hope to see more people. Until everyone is saved, none is safe.

I would first commend the Nigerian Ambassador to Hungary for what she has done for us. I was beyond surprised to see the level of preparation made for us; they provided us with the basic things we needed and that meant so much. Buses were prepared for us and we had a smooth ride from the train station to Budapest. Hostels were already booked for us and we were able to have a peaceful night for the first time in many days. I was pleasantly surprised by how easy we had it in Hungary. If I’m to rate their response, it’s going to be 8.5/10. The remaining points would depend on how our evacuation back to our country is handled (laughs). However, in Hungary, it’s a job well done and I hope they can help those stranded in Ukraine as well. A lot of Nigerians really need help and I can’t imagine how hopeless they feel right now.

Life before the crisis in Ukraine was normal. We slept, ate, went to school, had fun, went out with friends and all. Like every other country, there were pros and cons and for me, I would say my life in Ukraine was just good. I was contented with what I had and I was happy with my life. There were bad days too but that’s how life is. I was also well-loved by the Ukrainians I came across and I don’t remember ever experiencing any racism.

It’s so unfortunate and it makes me so sad and upset. It could happen to anybody, and it’s something that shouldn’t even have to happen in the first place. It’s a really sad thing and it makes my heart heavy.

I would love to go home to my family. Seeing my family is the therapy I need right now. I’m strong, resilient and I have a very strong mental health but this was enough to make me get mentally disoriented and I don’t think I will be fine if I don’t see my family. That’s all I need.

I would definitely love to return if peace finally reigns and I say this in favour of Ukraine. I have come to love Ukraine and I would love to see Ukraine get back on her feet as soon as possible. I would also love to go back to complete my education in my school. I don’t want anything to get in the way of my graduation; I don’t plan to spend any extra year too. So I pray this whole crisis comes to an end in favour of Ukraine. I have no doubt that Ukraine will come out victorious and things will get back to normal before we all know it.

My happiest moment had to be each time I entered the train. My saddest moment was when I had to wait and hustle to get into the train. I’m sure it was like that for everyone. The very first day has to be the saddest day of my life. I cried till I had no tears again.