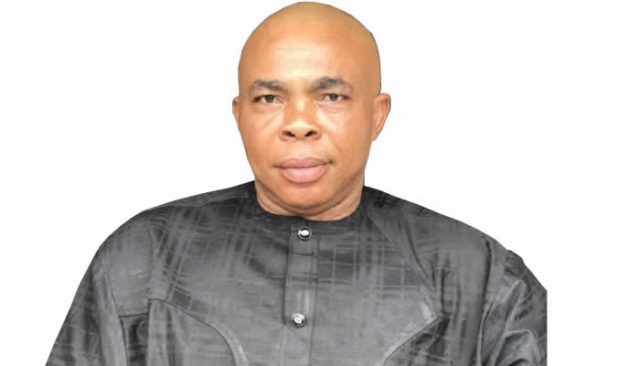 I am Dr Stanley Nwachukwu. I am from Umudioka Ukwu in the Orlu Local Government Area of Imo State. I am currently the Chairman of the Joint National Associations of Persons with Disabilities, Imo State chapter, and the President of Disabled Destiny Track Foundation.

I was raised in a close-knit family. I was treated with much love by all my family members. I would say my family was a middle-class home. Sometimes, most of my needs and that of my siblings were provided speedily; other times, we were told to wait until our parents got what we asked for. It was not an all-bad experience. There were up times and there were downtimes, but I wouldn’t trade that experience for anything. It moulded me into who I am today.

I was not born with any form of disability. I was told that I became sick when I was about two years old and my parents felt it was the ‘common’ malaria that all children suffer. I was being treated with malaria drugs for a while. After some time, one of my legs began to reduce in size, and I could not walk anymore. I became paralysed in that leg. It was much later that my family discovered that I had poliomyelitis and it was responsible for the paralysis I suffered to date.

While growing up I was showered with much love, being the first child in our family and so I never felt different both physically and emotionally. I have always believed in my abilities and this has helped me in life.

It was somewhat difficult especially with those outside my home. I was not given the opportunity offered to those who are able-bodied. That was one of the big pushes that instilled in me the survival spirit that I have today. I don’t let my disability define me. I push myself to become the best version of myself every day. I wouldn’t say I had it easy, but I was adequately supported as I earlier stated. My family members were highly supportive, and that is one thing I am forever grateful for.

Yes, it did. I think I began school a year or two later than I was supposed to start, but that didn’t worry me much. The experience that nearly threw me off balance was my days in medical school at the Abia State University, Uturu. A particular lecturer was insistent on my standing with fellow coursemates in carrying out some analysis during our studies, knowing full well that I cannot stand a long time with my clutch which I used as an aid then to walk. I even made a special stool where I could sit during such study times, but this same lecturer insisted I should not bring in that stool to his class. His refusal after many pleas frustrated me out of medical school but thank God I later undertook some correspondent courses and for long have forgotten that ugly experience. I later went back to Abia State University, Okigwe, where I studied Business Management and bagged my PhD.

My parents tried everything humanly possible so I would walk. After a while, I was able to walk for a few weeks, but I didn’t know I was doing more harm to myself. The pressure had stressed my legs so I was advised to use one crutch. It became worse; I started using two crutches. For three years now, I have been advised to use a wheelchair because the pressure on my legs is too much for them to carry.

I can’t think of any experience of discrimination against me that is related to my disability, but for bullying, I had some encounters, where I was punished in school by senior students as part of school life, but I don’t think of it much as being bullied.

I have never searched for a job. While I was in school, I began a small-scale business that gave me cash to do a few things then. Today, I have about 40 persons under my employ. I am really grateful to God.

I have never seen myself at any time as one with a disability. I have never.  There is nothing anyone with two legs can do that I cannot do. I drive from Owerri (in Imo State) to Abuja and any other part of Nigeria. I run my business conglomerate here in Nigeria and in Ghana. I have been blessed by God.

Much needs to be done. Although in recent years there have been few improvements, Nigerians still need to do more. Now you hardly hear stories of demonising a person with a disability or considering them as the dregs of society. The truth is that a lot more needs to be done by the government and individuals. I have had the opportunity to travel to America and some parts of Europe. I have been to some African countries where people with disabilities are truly treated with special regard. When buildings, even high-rises, are constructed, they are considered.  There are parking lots consciously designed for people with disabilities; welfare packages for us and many benefits accorded to those in our community. Sadly, we cannot say the same for Nigeria.

I met my lovely wife during a party convention. I was running for an elective office then and she was a secretary to my then party chairman. I noticed how humble and respectful she was to all who walked into her office and that was how I developed an interest. We decided to get married, and as they say, the rest is history. We are blessed with two girls and two boys.

I am one man who cannot just accept a woman after just one meeting. I must be certain that the woman wants a relationship with me before I make the move. I think that approach has saved me the experience of being mistreated by women. I till the ground by showing some subtle ‘green light’, and if I see acceptance I move with lightning’s speed.

Using my Foundation, DDTF, to touch lives; we recently organised a talent show solely for persons with disabilities and albinism. N1m was given out as the star prize while the first and second runners-up got N300,000 and N200,000 respectively. About 14 persons with some of their help were kept in our foundation office for nine weeks and were fed all of them throughout the period. We give cane sticks to visually-impaired persons every year. During the lockdown occasioned by COVID-19, the foundation sent out over 500 bags of rice and over 1,000 cartons of noodles. We have many persons with disabilities who receive stipends from us monthly. We have about 58 of them on our payroll.

Yes, I am a chief and I did not for one day tell anyone I was interested in having a chieftaincy title. It was a traditional ruler in Mbieri that saw my generosity and conferred the title, “Odozi Obodo,” which means ‘community builder’ on me. It has been such a good experience for me.

So far, I have got no regrets. I am most grateful to God for my life and my family. My children are doing well. My parents are still alive and healthy and God provides for me and I have been a channel used by God to uplift so many people.