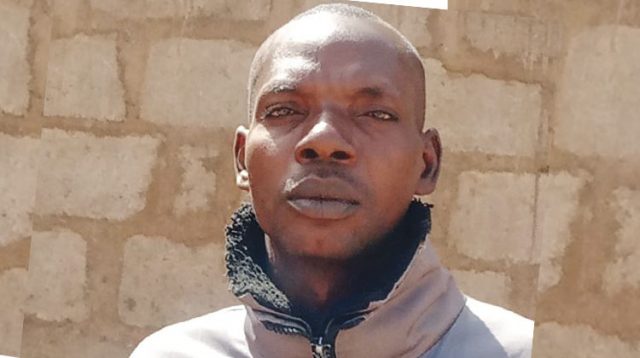 My name is Arastus Dimka. I am a 47-year-old police Inspector based in Gombe State. I am from Taraba State. I’m a father of five children; I have been policing for about 20 years and my service cuts across Yobe, Port Harcourt, Sokoto and Gombe states. I have been in Gombe for about six years now.

It happened on Friday (January 28, 2022), around 9am. I was the only one at home. My wife, who is a teacher, and the children had left for school. So, I was inside because I was on afternoon duty that day. As usual I was supposed to use the opportunity to rest and then prepare for my shift at work. Suddenly, I heard a breezy sound and I began to wonder where the strange sound was coming from. In my previous posting, I worked at the airport, so, I am familiar with the sound of a plane. I jumped out of the room immediately only to see that one part of the roof was on fire.

I began to scream “Go bara! Go bara!” (fire in Hausa language) to alert neighbours but unfortunately, majority of the people had either gone to work or to their shops. I had no other option but to face the fire alone in an attempt to quench it. I got water and poured at it but the fire increased in intensity. It was then I remembered that I had documents in the house and I made attempts to go in and pick them. By this time, some neighbours had arrived. I managed to salvage one television and a mattress. I also managed to recover some of my wife’s and children’s belongings before smoke engulfed me. The next I thing I knew was that I found myself at the Federal Teaching Hospital, Gombe.

I was told I inhaled a lot of smoke. The doctor said it was carbon monoxide inhalation. The neighbours that rescued me said I fainted while trying to salvage our things. The last thing I could remember was attempting to carry a cupboard containing my children’s things but I couldn’t successfully do it because it was heavy.

I was told I took like one hour before I regained consciousness. I was brought to the hospital unconscious. When I opened my eyes I saw my wife praying.  I began to wonder where I was. The smoke really affected my brain, because I couldn’t breathe well.

Really, I don’t know. I have not even connected the house to electricity; we were living there without the usual power. So, power surge is totally out of it. Secondly, we use gas but since about a week before, we had exhausted the gas in our cylinder. That is also ruled out. And then, the firewood we have been cooking with was not anywhere near the building.  That morning after cooking, my wife properly put out the fire. Fourthly, the fire started from the back of the building, which is nowhere close to where we cook.

My neighbours later called the fire service. They came but they were not prompt. All through the period I was conscious, the neighbours and I battled the fire until I found myself in the hospital. I was later told that the firemen arrived after the deed had already been done and there was nothing left to salvage.  But I don’t begrudge them because it is their work, they alone can tell what their challenges are and the reasons they arrived very late despite calls by my neighbours. The way they work in the state is not good; they don’t show up until things have gone bad. When they were asked why they came late, they complained that they didn’t have fuel in their vehicle and there was no driver to convey the fire appliance to the location.

I lost clothes, cooking utensils, furniture items, I lost over N800,000 worth of items. My children’s school uniforms were all burnt. The house is not my own. It was built by a sister, a member of our church.  She built the house and roofed it but she didn’t move in. I fixed the doors and windows. The place used to be a hideout for criminals. Sometimes after stealing in town they used the place for storage of stolen items. So, the sister advised me to get some money and make the place habitable at least to save me the cost of renting accommodation and also stop criminals from using her property to store stolen items. I saw that as a good idea. I just looked for money to fix the doors.

It has not been easy.  I want to plead for assistance to get another place to settle my family. It has not been easy for us since this incident took place.  Someone magnanimously offered us a room to sleep but it has been challenging because the seven of us have been putting up in one room. We have been surviving through the kindness of some persons who cook and share with us.

One challenge I’m faced with as we speak is the registration of my child who is to sit the Senior School Certificate Examination. My plan was to use my January salary for the registration.  I am looking for someone to loan me N20,000 because our salary in the police does not come until the following month.

Also, I want to urge the Gombe State Government to please assist the owner of the burnt house. It only normal for her to get help just as she did good to me, by providing me with an accommodation space and right now you can see what has become of the space. I have gone back to square one; I wish good spirited persons will support me with whatever possible to enable me to bounce back, to continue my role of a responsive father. They should please assist me by any measure possible.