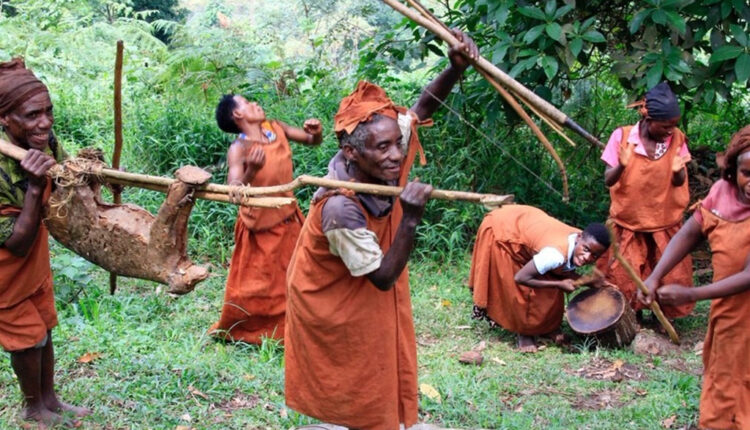 Losing one’s home is nearly tantamount to losing your identity and your sense of belonging and this is exactly how the Batwa people of Uganda feel.

Nearly three decades ago, the Batwa were evicted from their ancestral forest homes in a bid to conserve wildlife in Uganda. For centuries, the Batwa lived in the forests in the mountainous borders of Uganda, Rwanda and the Democratic Republic of Condo.

In order to make way for the famous mountain gorillas in Bwindi and Mgahinga forests, the Batwa were ‘relocated’ by the MBIFCT (Mgahinga-Bwindi Impenetrable Forest Conservation Trust) without their informed consent.

This act in the early 1990s was the last straw for the Batwa who had gradually been displaced from the forests by settler farming communities.

Remembering their culture and how fun life was before the eviction, 50-year-old Eric Tumuhairwe says, “This would have been a shrine, where we would communicate with our great grandfathers,” pointing to a place behind huts.

“When men wanted to go hunting, they would take meat or honey as offerings. They would hunt bush-pig and several types of antelope. The wives celebrated the bountiful hunt, cooked and danced. But we don’t get these types of food anymore. A young man intending to marry would have to trap intenzi (a flying squirrel).

“It is fast on its feet, so he would time it for when it was asleep in a tree hollow. He would catch it as it awoke and tried to flee. He had to bring it alive, otherwise, there was no wife for him. We climb further up the mist-covered forested hills, to a cave where the community used to congregate for worship. I want to go back to the way we lived… Everything we needed, the forest provided: meat, fruit, and medicines,” he reminisced.

After their eviction, some Batwa families were given pieces of land for farming, however, their inexperience with this life skill, saw the sale of the lands and now survive on charity from neighbours and non-profit organisations.

In 2011, a group of now scattered Batwa with support from non-governmental organisations took the Ugandan government to court over their eviction from the forest. The court eventually ruled in favour of the people saying, the community had been treated inhumanly and the Ugandan government must pay fair and just compensation in the space of 12 months – a verdict the government plans to appeal.

Speaking on how much she prefers life in the forest to what she has now, Allen Musabyi, says “If you don’t have land, you cannot progress, you can’t send your children to school, you cannot eat. But if I were given the opportunity to return to the forest, I would run all the way there.”

The Batwa people believe gorillas are being prioritized above them. Though the conservation efforts by the Ugandan government has seen a rise in the population of mountain gorillas to about 459 and hence no more an endangered specie, the Batwa believe this must not come at a cost to them.

One of the few Batwa that has managed to make it to the university says her people are not being treated right when they have to scarp for leftovers from dustbins in Kisoro (a town in the Western Region of Uganda) before they feed.

“The animals are being treated better than the Batwa because when tourists come, they pay some money, then the government uses that money, and the Batwa are suffering,” she said.

Tourists pay up to $700 to go gorilla tracking in the mountains and the Batwa people wonder if there could be a more sustainable way of satisfying both parties.

Uganda Wildlife Authority insists it is attempting to do exactly this by allowing the Batwa to take tourists into the forest and giving them a fifth of the revenue collected from the park.

Sam Mwandha, the Wildlife executive director, says the wildlife is open to receiving proposals from all parties including the Batwa on how to use the money collected from the park.

“During the movement of the Batwa out of the forest, several errors were committed. But the allegation of not getting land, not allowing them to have their culture, is really misguided and not correct. We are telling them: ‘Go to school and study, but we are [also] saying: ‘Don’t forget your culture, you can use it to make money.”

However, the Batwa people need a place to call home, an identity and not feel like an endangered indigenous people. Though the Batwa agree education and farming will definitely benefit them, they do not believe in erasing who they are for this and hence need to have better protection under international laws.

Climate change is happening faster than we think

Ramla Ali: From refugee who fled war-torn Somalia to undefeated…