Jacqueline Moudeina: Bringing down a dictator 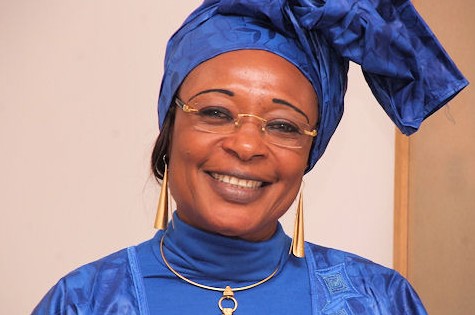 Chadian born lawyer, Jacqueline Moudeina, had only one focus and desire for becoming a lawyer and that is the one thing that has brought the fame and recognition she enjoys today.

63-year-old Jacqueline Moudeina is popular for having been the lawyer who led her team to bring down former Chad dictator, Hissene Habre.

Jacqueline in the 80s stayed with her husband who happened to be a very influential journalist in Chad at the time Hissene took over power.

‘Because of my husband’s job, we were always being harassed by the military. One day they came to our house to arrest us and my husband and I escaped from them. I left my house with nothing but a pair of jeans, which I was wearing. We escaped to the Central African Republic and then to Congo, where I stayed in exile for about 14 years.’

Moudeina says there was no family that was spared in Habre’s atrocities. Everyone got a fair share of it and she says she lost about 20 family members, during Habre’s reign in Chad.

According to reports, about 40,000 people were killed, where as 200,000 people had to endure various forms of torture during the reign of Hissene Habre.

Jacqueline returned to Chad after she had bagged her degree in law and describes what she saw in the country as heartbreaking.

‘I am a person who believes in unity and I like to see people together. I came back to a totally torn country. People now identified with where they came from. In the past whether you were from the North or the South did not matter to anyone, but now it did.’

Moudeina was one of only four lawyers in Chad at the time and was more than determined to bring the former leader of the country down, no matter what.

Hissene Habre had at the time, been long overthrown by Idriss Derby and was in exile in Senegal. It took a great load of convincing from Jacqueline for victims of Habre’s atrocities to start confiding in her.

‘I wanted to prosecute him but I needed evidence to do that and this mean I needed witnessed as well. Many of the people he had done bad things to were still scare, but with time, they started coming forth with their stories and confiding in me.’

There had been many reports of rape that happened during Habre’s time of terror in Chad, but one rape story that shook Jacqueline was one of a mother and her daughter.

‘I remember a mother and a daughter who approached me to share their rape story. The mother was accused of being a spy and since she could not be traced, her 13-year old daughter was arrested and detained for over a year. When the mother finally showed up, these soldiers arrested her too and they repeatedly raped both mother and daughter. Both ladies were turned into sex slaves by the soldiers. Their story simply broke my heart.’

During her travels around Chad and in attempts to still find more evidence to prosecute Habre, Moudeina came across mass graves that had hundreds of bodies. Some had as many as a hundred bodies, whilst others had 20 to 30 boides buried in there.

It was not until Jacqueline finally located the ‘swimming pool’ prison that her breakthrough came.

‘This was an underground prison. It used to be a swimming pool, but Habre’s men turned it into a prison. It was crazy hot and there was human excreta on the floor. People who were kept here were tortured and many died of suffocation. In here my team found a stash of files. Gratefully it contained records. Records of people they had arrested, killed, tortured. Finally, I had proof. I had all I needed to prosecute Hissene Habre.’

With this, Jacqueline Moudeina was set, She went over to Senegal and filed for the arrested of Hissene Habre. She filed charges on three accounts, torture, crimes against humanity and war crimes. Right after she did this, the threats on her life started. ‘Anonymous people call to threaten me and tell me if I love my life, I would drop the case. But I was too determined.’

A clear warning came when Moudeina and a group of women went out to protest one day. While protesting, Moudeina identified one of the many people she was prosecuting back home for aiding Habre, the police Chief.

He shot her a look and walked away. before long, tear gas was thrown at them and as she was crawling away, she saw a grenade coming straight at her.

‘I lifted my head and saw this thing flying right at me. It fell at my feet and exploded. I felt nothing for a few minutes, so I got up and straightened my dress. But, I immediately started to feel pains and realised my leg were broken, had severe nerve damage and my toes were broken as well.’

After this incident, Jacqueline’s friends organised and had her stay in safe houses to protect her.

In 2013, nearly 12 years after Jacqueline had started her demand for action against Habre, he was finally arrested. The African Union, through a special court set, ‘The Extraordinary African Chambers’ tried Habre.

The trial officially begun in 2015, but not without drama.

On the first day of the trial, Hissene Habre, simply refused to enter the court room. He had to be carried into the room by security personnel on duty.

After nearly 93 witnesses, five of which were rape survivors, the court on the 30th of May 2016 found Habre guilty and sentenced to life in prison.

This was two decades since Jacqueline started her fight for justice. ‘After the verdict I could not describe my relief. This was all I had been fighting for. I nearly got killed because of this. I had suffered so many things, just to get this victory, so I was very excited.’

When the verdict was passed, the court room was filled with applause as victims of Habre’s atrocities had finally got the justice they deserved.

‘Till date,some call the mother of the poor, the voice of the voiceless. I am just glad I could help these people. I hate to see people in pain or being cheated, so this was a big win for me. It was absolutely worth it.’

Now, Hissene Habre will spend the rest of his life in prison, unless he wins an appeal against his conviction and sentence.