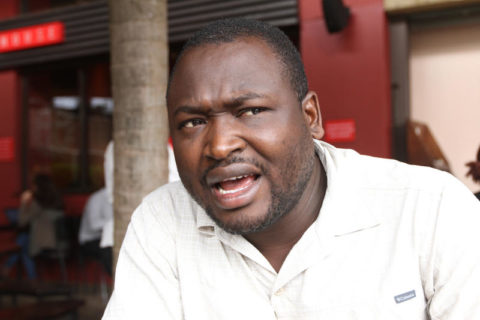 Showcasing an admirable and adorable persona all through his interview, one would never guess the kind of life Kennedy Odede had to endure and survive to be the man he is today.

Growing up in the biggest slum in Africa, Kibera, Kennedy one day had a dream to change his world and the world of the people around him and through the inspiration of Martin Luther King, the young man seems to have made that dream a reality.

Kennedy Odede, who has earned the name ‘Mayor of Kibera’ for himself narrates his life growing up in Kibera saying, ‘I love life in Kibera. The people were together, we lived in harmony and we genuinely cared and loved each other. We did not have much, but we had a lot of love and happiness living out there.’

Odede had to move to Kibera with his mum when he was very young and his mum was trying to find a job. She seems to have had no hope and that was how they ended up in the slum.

Having been named in Forbes 30 under 30, the young man recalls having to live in a 10 by 10 apartment with his mum and siblings, with barely any space to move. ‘Our apartment had no toilets and we were all cramped up in there in the room. Sometimes when we are hungry, my mum will call us and rub oil on our lips, so they don’t appear dry and then no one will suspect we were hungry.’

Amid this situation, coupled with the constant lack of food at home, Odede at the tender age of 10, decided to leave home and fend for himself. ‘I had a friend who had run from home and I often see him bringing food and luxury items to his family members and I liked his style of life. So, I decided to run away from home to be with him and join him hustle on the streets.’

On the streets, Kennedy had to resort to stealing and the constant use of drugs in order to survive. At this point, he believed his only prospects were either to die on the streets or go to prison. He got to the point where he could barely go to sleep without the help of sleep glue.

Life on the streets was tough but equally exciting for the young lad, until an incident occurred with his friend, that left him scarred forever. ‘The da before, we had gone to threaten people with faeces and made so much money. I was satisfied and so asked my friend to just let us go and chill. He, however, was unsatisfied and went out the next day to get more money. He went to steal and hand bag, was caught and was mercilessly beaten. While he was being beaten, one person saw me and called me the thief’s friend, I blatantly denied and stood there, watched on as they lynched him to death. I waited behind and saw the police van come pick his body and watched it disappear. This is a memory that has never left me up until this day.’

At this point, everyone would hope Kennedy would have enough motivation to want to go back home and have a more stable life, but the young lad was still enjoying life on the streets. It was after he had stolen mangoes and was being beaten, when an individual came to his help and offered to pay for whatever he stole, that he suddenly sat up and asked himself why he loved life on the streets so much.

Kennedy Odede never sat in a classroom but thought himself to read by gathering discarded newspapers and attempting to read and identify the words he saw. It was at this point, he became familiar with the persona of Martin Luther King and greatly identified with him. He began learning about the American civil rights campaigner Martin Luther King and was inspired. Kennedy wanted to start his own movement and it all began with football.

With a small ball he bought, he brought together the boys in his community and his friend, George from the streets was of great help at the start of this project. ‘I remember telling George I was tired of life on the streets and I wanted to start something new. Find a way to bring the people together and find something to do instead of resulting to drugs and stealing. George just laughed at me, but after I started, he saw the vision and joined me.’

Kennedy Odede and his friend, thus started the Shining Hope for Communities project which brought people together and they spent time playing football, acting drama and generally creating a good impression on the children of Kibera.

This group grew and grew and had more and more people interested in their organisation and want to support them. It was through this, that he received a message from one Jessica. ‘I had a yahoo mail I open once a month. One day I opened and there was a message from one Jessica, telling me she was from the United States and was interested in our project and wanted to give us scripts. My first answer was NO! because we had never done anything like that before. But, she sent in another one, I told the ‘council of elders’ about it and they asked us to give her a chance.’

Jessica moved down to Kenya and the two fell in love in the course of their work. Kennedy who currently speaks 6 languages had no intentions of going back to school or furthering his education, but the persistence of Jessica was one thing he could not ignore.

Jessica aided Kennedy to gain admission to the Wesleyan University in Connecticut with no primary school education and no worthy background. That was not all, the admission came with a full-ride scholarship that catered for all Kennedy’s needs in the States.

Through his Shining Hope for Communities project, Kennedy has met some of the most influential people in the world. From Madona, Bill Clinton, Beyonce, you name it. He is rightly making an impact on his people, exactly the way he has always wanted to

Kennedy Odede now lives outside of Kibera but says, ‘I don’t enjoy it. It is too peaceful. The regular hustle and bustle is missing and I still cannot get used to the silence out there.’ However, he has twin kids with Jessica to think about and hence prefers the more stable life for them.

In Kennedy’s opinion, one cannot force people to change, however, ‘you change people and a society by changing yourself. I did not go out there to change anyone or force anyone to be a particular way. I just changed myself as Kennedy and with time I was able to get other people to change with me. That is the only way you can effect change anywhere. Start with yourself.’

Kennedy’s foundation has built two schools and seven health clinics and provided sources of freshwater not just for Kibera but for other communities around them.

Priscillia Hoveyda: I talk to warlords and rescue child soldiers

Edna Adan Ismail: Building a hospital on a rubbish dump

Diana Chepkemoi: I almost died in the hands of a Saudi Royal family