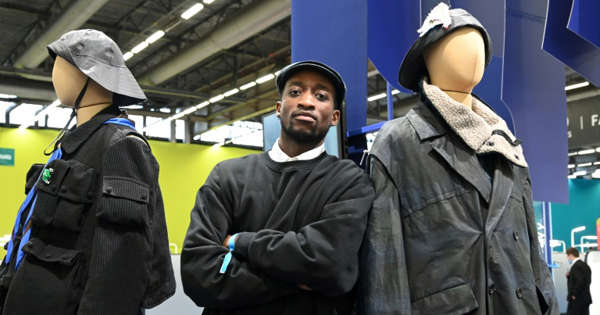 I was born in North West London and my childhood was nothing close to fashion. I just wanted to go out and spend time with friends playing football or hanging out, to be honest. I also had a strong female presence in my life, and that also helped to direct me.

Around year 16, when I was in college, I took a gap year. During this time, I thought about my real passion, and what I wanted to end up doing. Academically, I was an IT person, but I found that it was very competitive, and I was losing my patience with it. I thought about how I liked to sketch — not necessarily clothes, but people and things around me. I then took up a two-month short course at Central Saint Martins. From there, my teacher took a particular interest in my work, and that’s how fashion essentially began for me.

Again, I like to listen to music a lot, and that sort of provided a kind of basis and foundation for my work. Music helps and guides my thought processes. I go out a lot to these exhibitions and art galleries where I also find inspiration and I like talking to people, but not necessarily in very big social settings.

At the Hyères Fashion Festival, I was so much into what I was doing, immersed in it and getting the most out of it. I have been working on that collection for almost six years — the themes, the concept and ideas on what the collection would be based on. Presenting the collection on the day was when I actually realized how big of an occasion it actually is. I heard my name, and that’s when it kinda hit. It was a fantastic experience and one that I’ll definitely recommend.

Winning that fashion festival has given me mind-blowing exposure and resources. The different people and doors that are now open is something I never really considered would happen. I mean, I’ve tried to always put in the work, but I really thought I’ll be in the background doing what I do.

Speaking about Bridgerton, I’m a British Fashion Scholar, and Netflix proposed a project for scholars to design something. They had us propose some ideas, and I was a fan of the show from season one. I had watched it, so I had some ideas on what it’s about — the tailoring, the regency era. I was motivated to propose some ideas, and when I did, they loved it and took it up.

Being able to meet the actors of the show and interacting with them on their characters really helped inform my process of design. I also did look a lot into the regency period. Interesting enough, a year before this was proposed, I was looking into the regency era for personal knowledge. So, I already had that. I checked the dress code, the people, how it has been modernized, and so on. I also check on contemporary films and how the clothes’ silhouettes and shapes have changed. Then, I worked with Wedgewood to focus on the family of Bridgerton, their distinctive motifs, and how the family dressed.

The most exciting part of the project for me, I think was seeing the clothes in the real world. It was very difficult working on them, but it was a different feeling watching the characters wear them. The reactions from people were also really great, and I congratulate myself and the team for pulling it off.

In the near future, I really hope to present and propose a new approach to menswear. I want men to wear something that is relevant for today but also has some sort of substance behind it. I hope that I am not only able to design beyond clothes, but also produce ideas and ways of thinking.

I want people to wear clothes, and have other people learn about what their interests are from merely seeing what they wear. I hope that my brand isn’t just about logos, but I also want to put my identity into it, and use it as a way to story-tell and be an activist.

27-year-old Ifeanyi Okwuadi, born to a Sierra Leonean mother and Nigerian father studied textile design at Ravensbourne University in London. He emerged the winner of the 2021 Hyères Fashion Festival and this has gone a long way to cement his presence in the industry and has since granted him access to multiple spots, including being one of the designers to work on Bridgerton.