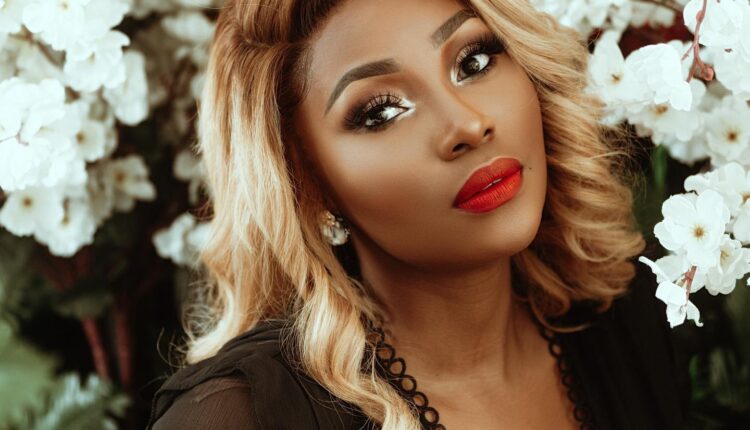 My most popular video is definitely the “Makeup dos and don’ts” video I 201. I had seen a couple of people do it prior to that but I kind of did it in a way that was funny, maybe cracked a couple of jokes around the not so great ways people were doing things at the time and that video just took off.

You could see the laughter in the comment section and people were also learning things at the same time – that’s my most popular video to date.

The relatability is so important. Before I started creating videos, there were so many black women, women of colour, who were doing something similar but then they were not African, they were not Nigerian.

You’d not imagine some of the barriers women who watch these videos face. They feel they don’t have access to the products some of these influencers are using. There’s also an accent barrier when it comes to language. Yes, you’re speaking English but if it’s quite fast, people who are not used to people speaking that type of English won’t understand. So, me sounding like them or talking in a way that I feel a lot of them will finally relate to, I feel like I helped me a lot, the humour as well. I just keep it real, I keep it 100 and I do not try to put on airs. I just want that whenever you come to watch my content, you’ve had a conversation with someone you.

No, I didn’t even know. If someone had told me the first time that I set up a camera to record myself that this whole thing will become what it is now, I’d have told them to go sit down because I just did not see it you know, it for me just started out as fun. I did not even know you could make money off Youtube for example, I did not know you could work with brands, I did not think I could make a dime. I just thought that the feedback was enough – it was amazing.

But then, as you begin to do these and the feedback starts coming and then bigger people start noticing you and start shouting you out and people begin to leave more personal messages. When the brands also start coming like “Oh we want to give you to do …”, I’m like “What? You want to give me money to do this

That was when it all started coming together and I realized it’s not just about fun anymore. I was so sceptical because I couldn’t believe it. I had imagined all these people (Youtubers) but I just didn’t know they were making all that money.

I had an eyebrow tutorial that went viral in 2013. I think YouTube Nigeria picked it up, something in their system told them that this person is a Nigerian in Lagos and I got an e-mail from someone who works at the YouTube office and they were like “Can I please just confirm our location” and I said I’m here in Lagos. At the time I did not know any other Youtuber in Lagos at all. That was why I wanted to start. They did reach out to me and invited me to their office. They told me “Do you know you can make money off of these videos”?

They told me about all these other people who are really cashing out. I was like okay, how does that work and they said “First of all, you have to stop using copyrighted music, just start using copyright-free music”. They gave me advice on what to do because, at the time, Afrobeats was just at that point taking off in Nigeria and then, I’d go and put the latest hit on my video and every time, I’ll get a copyright strike, I didn’t even know that was affecting potential monetization for me. So when they told me those things to clean up and all of that, three months later, I had still not done anything that they had told me to, then at a point I was like okay, let me actually give it a go. I started posting at least once a week, I started using copyright-free music and all of that and after a month of signing up to Adsense, I got my first cheque of about $120.

A lot of paid campaigns I have done with brands involve I off payments. Pay per post, story or video but YouTube pays you depending on how well your videos are doing. I know a lot of people who are making bucketloads of money just from Adsense alone but a lot of it has just the amount of people you are able to reach and also where your audience is, how much influence you have over your audience. For example, even as a Nigerian creator we still know there are certain audiences that you try to key in because if you are getting views from certain locations like America where advertisers pay` more to YouTube. If about 80% of your views are coming from the states, you cannot compare somebody like that who 80% of their views are coming from Nigeria and Nigeria alone. You also want to key into locations where you know that advertisers just pay more and creators indirectly get paid more because you are getting views from certain locations.

For YouTube, it’s about 434,000 followers I think and on Instagram, it’s about 174,000. Honestly, the goal for YouTube this year is to hit a million. Even with Instagram as well, about half a million, those are the numbers I am looking at.

For me, with the tutorials or the makeup looks that I do are not really artsy so what I normally do is think of what people would want to see. Like what type of easy looks are people hoping to see at this time of the year, sometimes, I take on social issues, that could also be inspired by what is going on and I take on video requests as well. If it is videos that are very chatty, I script. Makeup tutorials take like 2 hours up to three but the chit chatty videos do not take as much tie so maybe it can take up to an hour. Editing is what takes a lot of time, filming does not take as much time as editing.

I have an editor now that kind of helps especially with longer videos so that, I am able to focus on other things. I also have an assistant no who kind of does admin and does the back and forth when it comes to emails with brands. I have another editor actually, two editors – one assistant.

With me, I have just gotten to the point where I had to give myself a time limit. What I tend to do is reply to the first set of comments that I have, maybe the first 20 or 30. No matter how much you want to, you really cannot reply to everyone.

I don’t post my really close friends and family members. I am quite protective of certain people in my life as I would put maybe other friends who are fellow creatives or working in the industry. I am very very private when it comes to those types of relationships. Outside of that, I have always been very upfront and open about specific subjects. I had surgery for example last year and I kind of did a video around that talking of all the things that led up to it and how much it had affected me over the years. I can be quite open but the thing I’ve had to learn is that the internet never forgets so you have to be very very critical, I have to be very critical about the things that I put out.

You see this sometimes even with creators who get into a relationship that maybe doesn’t work out but they are quite open and they are really trying to desperately move on but then the audience will not let them, they will be bringing up people you are trying to forget almost all the time.

I have talked about mental health, depression, and health-related issues and with those ones, it’s always me asking myself before those kinds of videos “Am I going to be helping someone with this?”. If I am able to be able to help certain people feel that they are not that alone or that they could get through certain things.

So with those things that are around mental and physical health or are somewhat sensitive, I am very critical about how I say it and the feedback is always a lot. People always reach out to thank me making them not feel so alone.

Right now, I am even going through stuff and I have not posted in 2 months or so, I am really going through a phase that is personal and I am really trying to heal and people are like “It’s so unfair that you’ve not given us videos”. You don’t even know if I am alive, I don’t understand. Can you please ask how a person is doing before you go into this attack?

I feel like I’ve been on social media long enough to know that it’s also some people not just knowing how to talk or feeling too entitled and in some cases, I’m just very quick to say, “Please do not talk to me like this, I do not appreciate it. I remember sometimes it was so bad for me that I came into my dm to a message of someone telling me that I was being lazy and tend to ignore but the least you could have done was ask how I am

Creators do not exist for your entertainment. They have real life issues and what you guys tend to see is no matter how often or what frequency we put it out is a very small fraction of our lives.

I was editing myself for about 8 years and it got to a point where I just started resenting the process of editing – the process that’s sucking the joy out of it. You won’t enjoy that, it begins to affect your social life. It’s like there’s a constant deadline at the back of your head. There’s a constant figure at the back of your head. I had to have a very practical conversation with myself.

The way social media is you can’t help but compare sometimes. Comparison is the thief of joy because you are trying to focus on this thing that you’re trying to do but from the corner of your eye, it’s either you’re seeing something. It can be a lot so I have just outsourced what I can outsource and pray and strive to be more strategic and easy on myself as well and just do what I can when I can.

I am very particular about the language that I use because there are so many young impressionable girls watching me.

How I prevented my death