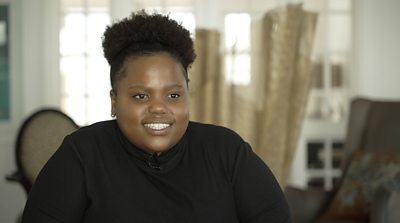 Compassion and empathy really lacked for me in that environment (boarding school), and so to have someone that said to me: “Don’t worry about school. It is not about the grades, focus on your health.” That was the first time I felt heard in my situation.

I grew up with a lot of like my friends and family saying: ‘Tshimi is so moody.’ I also kind of took that on. If I am moody and I am in a mood, you’ll kind of deal with it. I’m known to be moody.

I can wake up just like very upset, like rageful. And it lasts two hours, four hours, ten hours. And then I can be like completely fine and everything can just be smooth sailing. I finally found some help from my teacher.

Then one day, she said, “Girl, you need to come out of your room. You need to get help. ” She was the catalyst for that. Since starting treatment, I am doing so much better now. I have a good enough relationship with my mind and my body. I am not in a disruptive space anymore.

I just don’t think there is enough information and enough good people that seem to be “normal” people just telling people what it is like to have a mental illness, you know. A lot of people think it has to look a certain way or behave a certain way. So for me, it wasn’t a big deal to tell everyone.

I think you should honour your feelings but also try to realise that it might not be everyone else, it might just be you and that’s okay.

Borderline Personality Disorder (BPD) is a mental health condition. It is often characterised by difficulties with regulating emotions. In some cases, episodes can last for days or even longer. BPD mimics other mental illnesses, making it very difficult to diagnose.

According to the WHO up to 6% of the global population have various forms of personality disorders, and these conditions affect more women than men