My married boyfriend ordered an acid attack on me 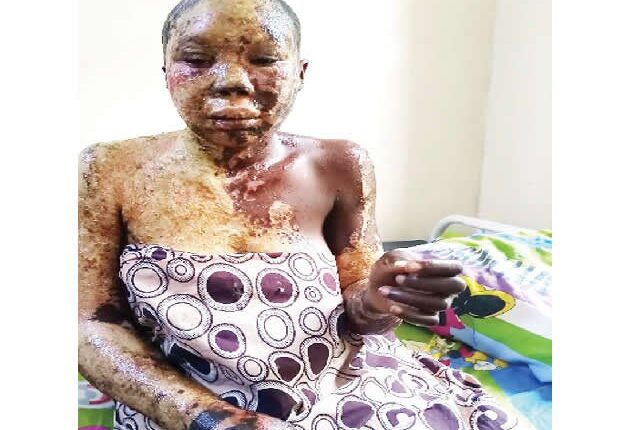 My name is Ladi Ishaku. I am 27 years old. I reside in Badirrisa, Girei Local Government Area of Adamawa State. I am a student of the Federal College of Education, Yola, nearing the completion of my national certificate of education in Special Learning Disabilities in Geography.

I was sleeping at home on the night of March 17.  I wasn’t alone, my mother’s sister (aunty), was lying in between me and one of my siblings. The weather has been hot lately, so, to escape the heat we usually sleep outside, because it has become greatly uncomfortable to sleep indoors.

On that fateful night, around 10 pm someone came into the compound, passed over my brother and my aunty and poured something that felt like a liquid on me. I immediately woke up and shouted, “Holy Ghost fire!” I saw the shadow of a man take flight. Then I started feeling a hot sensation all over me. I started to shout. My brothers who were sleeping indoors heard my cry and rushed out but the person who poured the acid on me had escaped. It was dark so we could not see the direction he went.

One suspect has been arrested. He’s my boyfriend whom I suspect of ordering the acid attack on me because of the threat he had been issuing since I refused his proposal for marriage. We have been dating for close to a year now but when he proposed I decided to find out about him and then discovered he was already married with three children. I live at Baddirrasa and my fiancé lives in Song, where he works as an automobile engineer. So, I asked one of my aunties who lives in Song to help dig out some information about my fiancé which she did and that was how I got to know he was married. Armed with this information, I then told him I wouldn’t be getting married to him. He then said if I refused to marry him he would never get married to anyone else.

From that point, he started making life unbearable for me. He would come to my school and if he found me with anyone of the opposite sex, he would start fighting me and beating me. He made life so unbearable for me. There was a time he followed me home –  then my deceased mom was still alive – he came into the house and manhandled me. This was after he realised I wasn’t going to marry him. At my mother’s funeral, he did the same thing; he doesn’t want to see me with any other man if he does he will approach me and start beating me; all of this he was doing was to frustrate me. He kept telling me if he wasn’t the one to marry me everyone was going to lose. He remained resolute that he must marry me and he would sometimes bring me a lot of money to entice me to change my mind but I always refused him. I told him I could not marry him because of my Christian values.

It is because of his actions and utterances – what he kept saying since December when I informed him I wasn’t going to marry him. He made it clear there would be consequences, that he would make sure I never marry if I refuse him. His actions of frustrating me and coming to my school to harass and beat me showed he was capable of doing something sinister like this. So, when the incident happened, the police immediately arrested him. How the incident occurred clearly showed that the person who attacked me knew who he was coming for because three of us were lying down outside. I was between my aunty and my younger brother. The assailant passed over them came to where I lay and splashed the liquid on me. Some of the chemical spilt over to my aunty’s face. So, clearly, the person who came for me knew his target. I told him I didn’t want to have anything to do with him again, but he said my marriage to him was a must, that I must marry him.

Just recently he came with a lot of money to give me. But I rejected the money. I told him not to bother. That was in February, after valentine’s. I told him I knew he had been married and I couldn’t marry him. I told him to go and let me be, his final word on that day was “Everybody would lose”. Though I don’t know if he carried it out personally, at the moment he, Kama Hammanjoda, is just a suspect.

My dream was to graduate and become a teacher. But I don’t know what will become of that dream now (sobbing). This world is wicked. I didn’t know love can be a bitter sting. I just want to die and leave this miserable world.

We have been married for 50 years without interference from family