My son died at post; it is God’s doing 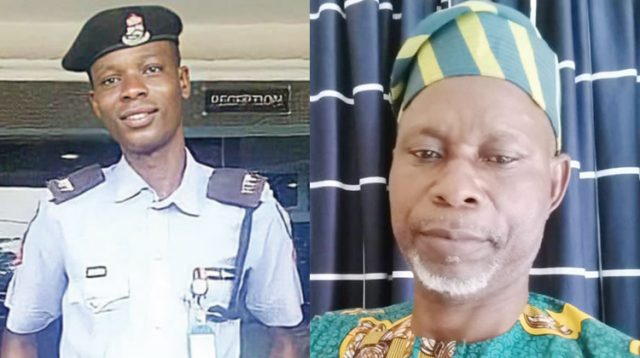 I heard that my son had an accident and he died. He left three children and two wives behind. Even, GNI (Gboyega Nasir Isiaka) has called me this (Thursday) morning to sympathise with me.

There is no need to fight because what happened to him was an accident and it can happen to anybody. Nobody killed my son, it is God’s doing.  All I want is just for everybody to assist me in whatever way they can, particularly to take care of the children that he left behind. I want the governor to give the three children scholarships and he should also help in taking care of Adeleke’s wives. That is what I am after. If they will help me sponsor his children’s education, I will be happy.

His children are young; they are still in primary school. The eldest among them is eight years old.  So, they should help me to sponsor his children’s education by giving them scholarships, and also provide empowerment for his wives.

Leke’s death is really painful. He was supposed to put dust on my grave, but now he is dead (weeps). He was my lookalike; once you see me, you don’t have to ask what he looked like. He was just as slim in stature as I am. He was my third child. His death is painful. I just can’t hold back tears whenever anyone calls to commiserate with me on his death. He had a big dream. He was expecting his promotion to the rank of an Inspector; he told me he would be promoted this year. Leke used to boast in our community that he would become an important person in the police force. But man proposes while God disposes (sobs).

I supported his police career. When I was young, people used to call me a policeman. I am the one that was supposed to be a cop, but he was the one that ended up being one. There was a DPO at zone D, Mushin where I lived while I was raising my children; he persuaded me to join the police whenever I interfered in cases then. The DPO was always saying: ‘You must join Nigeria Police.’ He was a gentleman. Leke was not a corrupt officer; his death was just accidental. It was not like he was taking bribes on the road or going to rob when he died. He did not stain the family’s name. Sometimes, when he was on special duty, I would go there to advise him on how to behave; preaching to him that life is not fair.

He was very obedient to me. Whatever I asked him to do, he would always oblige. If he had a contrary opinion to what I was suggesting, he would explain things to me in a way I understand.

He died on Saturday but I got the news on Sunday (sobs). I spoke with him on Wednesday and Thursday. He told me he wanted to see me and said he would visit me. That was our last discussion, not knowing that we would never see again.

He was the one supporting me since his mother died 20 years ago. Right now, I am looking up to God to provide for me. When I had prostate cancer and came to Sagamu to have an operation, he was always checking up on me. Leke would check up on me twice a day. In fact, if he wasn’t working, I am sure he would have stayed permanently by my bedside.

I looked on helplessly as mum struggled with hair loss

We have been married for 50 years without interference from family