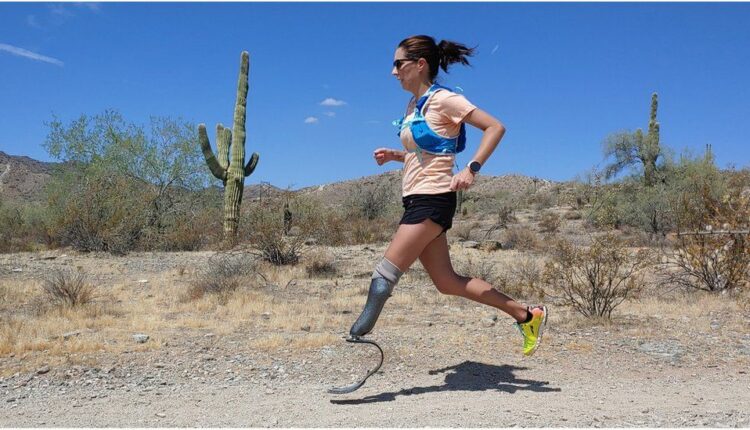 A woman who took up running after she lost her left leg to cancer has passed the Guinness World Record for most consecutive marathons.

On Saturday, she completed her 104th consecutive marathon in as many days – an achievement she expects to be certified by Guinness World Records.

A spokesperson said certifying the record would take around three months.

Waking up on Sunday – a day off at long last – was a bizarre experience for Jacky.

“Part of me was really happy to be done,” she tells the BBC from her home in Arizona. “And the other part kept thinking I need to go running.”

Her body is also recovering from the record-chasing effort, despite having stopped. “I feel tighter than I have the whole 104 marathons,” she admits.

But Jacky – who was born and raised in South Africa, and has also lived in England and the Netherlands – is grateful. Because running has given her the confidence she was afraid she would never regain.

In 2002, doctors in the Netherlands diagnosed her with Ewing’s sarcoma, a rare type of bone cancer.

Within two weeks, they amputated her left leg to save her life. She was only 26 years old.

“It was a rollercoaster,” she recalls. “Everything happened so fast.”

For the first couple of years, Jacky struggled with the change in her life. She was angry that she had got cancer and embarrassed to be different. She wore long trousers in public so people would not notice the prosthetic.

She had cheered her husband on at long-distance running events but had never considered doing it herself, thinking it was only “for crazy people”.

Buying a special prosthetic for long-distance runners, she signed up for her very first 10K (6.2 mile) run.

On the eve of the race, she switched her registration to the half-marathon category – and she has not looked back since, exploring longer distances and different terrains.

“I’m an all or nothing person, so I just threw myself in,” she explains. “I love pushing boundaries and seeing how far I can push.”

At the beginning of the year, Jacky gave herself a new goal: the record for most consecutive marathons.

The female Guinness record stood at 95 – set two years go by Alyssa Amos Clark, a non-amputee runner from Vermont – who did it as a pandemic coping strategy.

The male Guinness record is held by Enzo Caporaso of Italy with 59 – although Spanish ultra-runner Ricardo Abad reportedly ran 607 consecutive marathons, finishing in 2012.

So Jacky – a mother of two who works as an endurance coach – started running with the record in mind, making sure she always ran at least the length of a marathon.

Starting Monday I will be running a Marathon a day for 100 days, total of 2620 miles. Current record is 95 days. Yes totally crazy but I don’t do small goals😜. We are always capable of more. More details on my IG pagehttps://t.co/upBJQumppN
#SaturdayMotivation pic.twitter.com/nN9u3MEDXu

She did the world-famous Boston Marathon in Massachusetts and the Lost Dutchman in Arizona, but marathons are not scheduled every day, so she also ran on local dirt paths, neighbourhood trails and even her own treadmill at home.

And when British runner Kate Jayden broke Alyssa’s record by completing 101 runs, Jacky kept going to beat her and “to round the month [of April] off” with one final marathon.

All told, she ran 2,734 miles. Guinness World Records told the AP news agency it would take around 12 to 15 weeks to review the evidence and certify the record.

Documenting those runs on social media, Jacky has raised over $88,000 (£70,000) for Amputee Blade Runners, a non-profit organisation that provides running blades like hers to amputees.

The runs have been mostly a mental game, she says, but they have also taken a physical toll.

She has to wear liners and sweat socks with her blades, and needs to foam roll, stretch and ice her leg stump daily. Remarkably, she remained injury-free throughout the feat.

In fact, Jacky wishes she had started running earlier.

“Running has made such a difference on my mental state and it showed me how strong my body can be. It gave me a total new acceptance of who I am and that I can do hard things.”

And she is determined to keep going. Next up: the Moab, a gruelling 240-mile race in Utah this October.