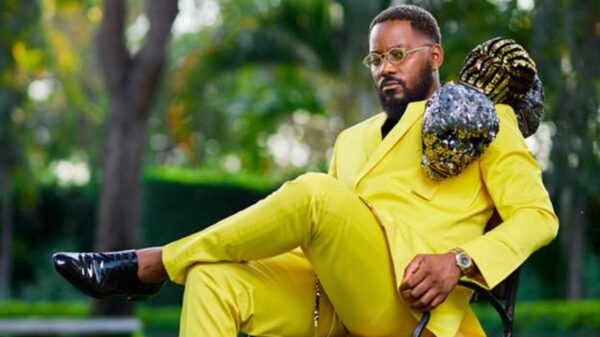 Thirty-seven-year-old Malawian hip-hop artist, Limbani Kalilani, better known by his stage name, Tay Grin says it is his aim to showcase the beautiful culture of the people of Malawi, through his music.

‘My sound originates from the soil. It’s a fusion of modern-day sounds and drums. I’m from a tribe called the Chewa, and when I’m performing on stage I have my traditional drummers. Even our dancing is a fusion of traditional and modern-day dance.” According to Tay, his people use specific Nyau drums that have to be warmed up over a fire to thicken the hide.

“This gives them a quality that doesn’t sound like any other drum you’ve ever heard. It’s a very spiritual sound. When you watch the set it’s a portrayal of who we are as a people.”

Limbani, who is the son of Dr Jean Kalilani, a former cabinet minister and a senior official in the Malawi’s Democratic Progressive Party (DPP) led government owns his own record company, Black Phyno Entertainment and has gone on to win many awards with his unique style of music. Dr Jean (his mother) was also a United Nations diplomat for the best part of Tay’s growing life.

Tay Grin has a close relationship with his mother: ‘She has always supported me from the beginning. She even made an appearance in one of my music videos. Watching my mum in all these leadership roles has sharpened my skills and I hope that one day I can look back and say I’ve also done great things.”

Tay Grin has also run for political office himself but came second. ‘I care passionately about the development of my nation. There is a possibility that I might go back, but I think music is the focus now, and there’s a lot more that needs to happen in terms of developing the music industry back home and getting Malawi on the map internationally.’

‘Chipapapa comes from a game that we used to play as kids and I turned it into a song that everyone can enjoy. It became a huge hit because it resonates with both the younger and older generations.

Tay says he grew up listening to many different artists in his household. ‘My mum used to love Kwassa Kwassa so I grew up listening to Kofi Olomide, Papa Wemba and Pepe Kalle. However, I dropped out of music class in high school because my grades were very bad. Fast forward a few years and here I am. Music is a thing that I do every day.’

In 2014, Grin won a Black Entertainment Film Fashion Television and Arts (BEFFTA) award for Best International African Act. In 2016, he won the BEFFTA Star Award in the music category and says he has many exciting projects on the way with his third album dropping this year, and a new song on its way celebrating the Chewa king.

“I’m proudly showcasing my culture to the world.”

Preserving Malian music during a war