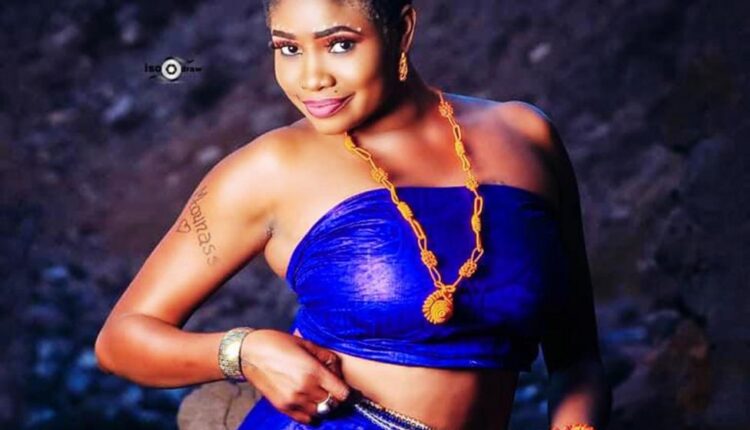 Following widespread protests in Senegal about the rape and murder of women, the law was changed in 2020 to make rape a serious crime instead of a misdemeanour. The events opened up a conversation around sexual assault, shame and accountability, headed by a pop star who dared to sing about her own experience.

In her home, two hours south of Senegal’s capital, Dakar, pop star Lady Mounass sings me a song in her native Wolof language:

I don’t have the strength to fight

Not even the strength to argue

I lost my confidence

You took what was dearest to me

Lady Mounass is known for her saucy lyrics and signature sexy style, but this song is very different. It details the emotional trauma she suffered after being raped by two men in 2011.

“It’s very difficult for me to sing this song unaccompanied because the words are a description of what actually happened to me,” she says. “I cry myself to sleep frequently. Every day, I’m living with the shame attached to it.”

Lady Mounass says she went to the police and one of her attackers was arrested but later released without charge. Her family wanted her to keep quiet about her experience, but during an interview on Senegalese television last year, she inadvertently revealed the truth.

“The presenter kept asking me, ‘You seem to have a particular interest in this issue, you seem to be particularly sensitive to this topic.’ And so the tears began welling up and I just couldn’t contain it.”

The revelation sent shock waves through her life. Some critics suggested her “provocative” style had given men the “wrong impression”, while others claimed she’d made the whole thing up as a publicity stunt. “Some people tried to say that I was only doing it to get attention – and that really hurt my feelings,” says Lady Mounass. “My own family said, ‘This is exactly why we told you not to talk about this publicly.'”

In the weeks that followed, many people contacted Lady Mounass to talk about their own experiences of sexual assault. There were harrowing stories – one woman told her she had been raped by her grandfather; another by her father, and that her mother had refused to believe her.

As the stories came in, Lady Mounass ended up becoming a spokeswoman against sexual violence. She joined a government campaign, touring the country to raise awareness of sexual violence and the legal support available to women. Her song became the soundtrack to that campaign.

Women have traditionally been heavily stigmatised and reluctant to speak out about rape in Senegal, let alone brave enough to release a song about it. Lady Mounass has decided the shame isn’t hers to carry.

But for some women, becoming a victim of sexual violence means rejection by their family and community. This is what happened to two young women I met at the first Senegalese-run refuge for victims of domestic and sexual violence. We have changed their names.

Located in a quiet Dakar suburb, the refuge is run by Yacine Diouf, the daughter of a former president. We enter through a heavy wooden door, “to keep out angry husbands and families”, says Diouf. The refuge is able to provide a home for 25 to 30 women at a time, as well as their children. They will be offered training and skills to help them live independently once they leave.

Deena is 19, but looks a lot younger. Dressed in a white T-shirt and jeans, she scrolls endlessly on her phone. Deena was raped when she was 15. The rape resulted in a pregnancy and now she is the mother of a three-year-old child.

“The man who attacked me was detained by the police,” she says. “He gave false testimony. They let him go after a month. Even so, he recognised the child and accepted paternity. I used that to file a complaint, but he ran off to Guinea.”

Deena struggles to get by on $2 a day. “Life is hard. I was at school but I’ve had to give it up. I have no choice, I have to provide for my child. It’s a difficult situation, my parents got divorced after what happened.”

Sitting next to Deena is Sarah, also 19. Last year Sarah was raped and now she is pregnant. She didn’t go to the police or tell anyone about what happened. The rape was only discovered when her pregnancy started to show – then her family kicked her out. She was brought to the refuge when she was found sleeping on the streets by staff.

“In her culture, there’s a lot of shame attached to being raped, so both her maternal and paternal family rejected her,” explains a refuge worker who is looking after Sarah.

In Senegal, the concept of “sutura” – discretion – can pressure victims of sexual violence to stay silent, says Fatou Warkha, who runs a YouTube channel promoting women’s rights. “Sutura means that women feel they have to hide these things, so this has been a real obstacle in changing the way that women raise the issue of rape when it happens,” she says.

Warkha is part of a group of feminists who created the Dafadoy Collective, which means “enough is enough”. In 2019, campaigners began using the #Dafadoy hashtag, much like the #metoo movement, and organised sit-ins to protest against sexual violence.

That year, a series of sexual attacks on women led to widespread protests. Most prominent was the case of Bineta Camara, 23, who was strangled after her murderer tried to rape her. Her case caused anger, not just among feminists, but across a large cross-section of society.

El Hadji Elias Ndoye, a young graduate, was one of the 3,000 people who joined the protests in Place de la Nation in Dakar. “Due to the patriarchal nature of the society here, men’s presence in these demonstrations is essential,” says Ndoye.

“Some people accuse me of being under a woman’s thumb, but truthfully, it’s time for women’s voices to be heard. The silent majority of men are with us because it’s their daughters, their sisters, their family members who are vulnerable.”

Also protesting was Mamadou Maktar Gaye, the head of Jamra – one of the most influential Islamic organisations in the country. He and Jamra stood alongside their “sisters” in opposition to what Gaye refers to as “the scourge of rape”.

“It’s about men having to change their behaviour,” he says.

The protests forced a change in the law that activists like Warkha had long been campaigning for.

Rape first became punishable by law in Senegal in 1999, when it was classed as a misdemeanour. Two decades later, in 2019, there were 1,026 official reports of sexual violence, of which half were believed to involve rape. But accurate numbers are hard to come by.

A representative from the Ministry of Women, Family and Vulnerable People told the BBC they did not have figures relating to how many women were really affected – and that in any case, reported statistics on rape notoriously underestimate the scale of the problem.

Steps are now being taken to make women feel more comfortable when reporting sexual assault to the police. Police stations are being redesigned so that women are met at reception and taken to a separate room, where they can speak to a female officer.

These changes are part of a project funded by the EU and led by a senior police officer, Commissaire Binetou Guisse, whose job it is to monitor gender-related violence around the country.

The police also work closely with women from the local community who act as important intermediaries. They are known as “badianu goch” – a term meaning paternal aunt, an important figure in Senegalese families. The government now trains badianu goch to help protect vulnerable women and children.

“These women are the ones who tend to know what’s going on and they will bring the issue to the attention of the police,” says Guisse.

Guisse says the changes seem to be having a positive effect, with more people coming forward to report domestic and sexual violence.

Free legal advice is also being provided in clinics around the country by the Association of Senegalese Jurists (AJS), who have been on the front line of women’s rights in Senegal for decades. They say they recorded more than 3,000 cases of sexual violence in 2021 alone, but point out that they don’t have clinics in the majority of the country’s 42 departments.

And staff at one AJS bureau told us that because the new law is more complex, it’s resulting in a longer legal process.

“There are many men currently being prosecuted but so far, not a single man has been convicted – partly because the new procedure is a lengthy one and requires an extensive investigation,” says Aby Diallo, AJS president and a former senior police officer.

So could this longer legal process actually be counter-productive?

Diallo doesn’t think so. “It’s a good law, but it needs better application, it needs more magistrates and it needs more awareness in the local community about how the new law operates.”

She explains that under the old law, many rapists were coming out of prison after just a few months, and this was having a hugely detrimental impact on the victims. “Ultimately, it is tough sentences which are likely to drive home the severity of these actions,” says Diallo.

But with a single conviction yet to be made, it’s clear that many victims of sexual violence are still waiting for justice.

Lady Mounass hopes the song she has written about her ordeal will help other women to speak out. “I have a platform as a singer and I feel a sense of responsibility. I felt that I had to say something about this,” she says.

“I’m calling on men in particular to stop the culture around rape and to stop making it something that women feel they have to keep quiet about.”