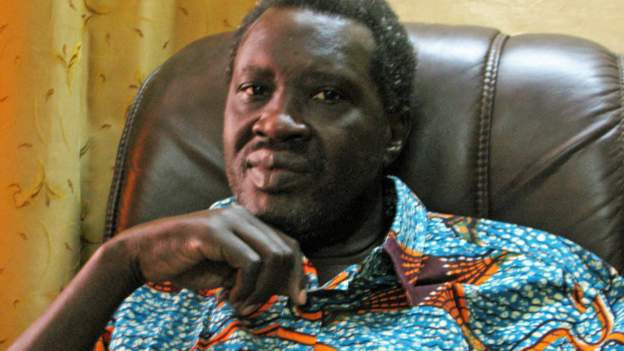 “A beacon of journalism through the civil war”, “a voice for the voiceless”, “brave and courageous”, “gracious and committed” are just some of the tributes being paid to South Sudanese journalist and politician Alfred Taban, whose death was announced over the weekend.

Taban, a former reporter for the BBC World Service’s Focus on Africa and Network Africa programmes in Sudan’s capital, Khartoum, was the founder and former editor-in-chief of the Khartoum Monitor.

It was Sudan’s first independent English-language paper – launched in September 2000 and renamed the Juba Monitor after South Sudan became independent in 2011.

When he was awarded the National Endowment for Democracy in 2006, the US pro-democracy foundation said Taban had “been one of the leading non-violent voices of Sudan’s dispossessed and marginalised communities, as well as an advocate for national reconciliation, human rights and democracy.

He was repeatedly jailed by the authorities in Khartoum and was later imprisoned by those in South Sudan for his determination to tell the truth.

Amongst his other accolades was the UK’s prestigious House of Commons Press Gallery Speaker Abbot Award for his “bravery in the face of personal risk including torture, and for his commitment to bring to the wider world the horrors of Darfur”.

Rachael Akidi Okwir, head of BBC East Africa and who accompanied him to collect that honour in 2005, says she remembers him as “a champion of media freedom in Sudan before the referendum that paved the way for the independence of South Sudan”.

Quote Message: At more than 6ft tall, Alfred Taban was towering in both stature and intellect. This brave man never gave up standing up for the truth and justice.”

At more than 6ft tall, Alfred Taban was towering in both stature and intellect. This brave man never gave up standing up for the truth and justice.”

In 2017, Taban went into politics and became an MP as part of efforts to end the civil war in the world’s newest country.

“Alfred always argued that he was nudged to join politics, and despite later suffering poor health brought about by a stroke, he kept going even when his speech slurred,” Akidi Okwir says.

According to South Sudan’s Eye Radio, Taban negotiated the release of political prisoners, including journalists, before accepting an appointment to the National Dialogue Initiative.

Eye Radio’s station manager Koang Pal said that Taban was a “hero and a true freedom fighter” second only to John Garang, the former rebel leader considered the father of South Sudan.

Others on Twitter have described him as a mentor and BBC colleagues have remembered how generous he was with his advice:

Alfred gave wise and informed advice to me and many other journalists over the years, quite apart from his own award-winning career.

A campaign has been launched on social media to raise money for the family of the 62-year-old to pay for outstanding bills at the hospital where he died in Uganda and to take his body home for burial.

I want to see more African girls in the water surfing