Winston Trew: Haunted by my false arrest for 50 years 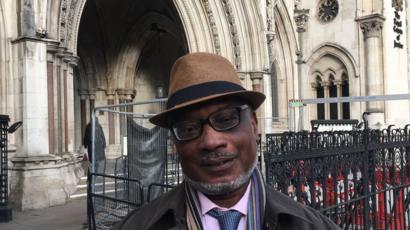 Black activist, Winston Trew, had to live 50 years having nightmares about the police officer who arrested him wrongly and falsely accused him of stealing handbags.

Winston Trew moved to England from Jamaica in 1956 at the tender age on 6 years. He was the first of six children and this meant he had to develop a sense of responsibility in order to take care of his siblings.

Upon arriving in England, Trew was subjected to a lot of racism as was the case in the UK at the time. ‘I remember I was the only black person in the school and one day someone just walked up to me and punched me in the face, for no reason.’

His mum was a very philosophical individual and always advised him to see beyond what people said or did to him and focus on growing as an individual. ‘This entire racism deal was new to me because race and colour were not topics discussed in my home. We just never talked about it.’

When Winston Trew was only 9 years, his dad an underground rail worker was involved in an accident which took his life. This was a very tough time for the family, as his jobless mum did not have the means to take care of 6 children.

‘I remember we went round from place to place looking at rooms and hoping to rent, but no one was willing to rent out to a single mother of 6.’

This meant, the Trew family had to be separated between 1960 – 1961 until his mum could find a more stable means of income and then they did reunite.

At the age of 19, Winston Trew realised he had a passion to empower black people and help build his community. In 1970, he joined the Fasimbas (Young Lions), the youth wing of an organisation called the South East London Parents’ Organisation. One of their roles was educating youngsters of Caribbean origin about their backgrounds and history and helping those with reading problems as part of their education at a supplementary school.

After one of their meetings, when Trew and three other members of the movement were heading back after a meeting, they were accosted by the British Transport Police officers at Oval Underground Station. The four men who later became known as the ‘Oval Four’ were roughed up by the police.

‘Right after we got out of the elevator, we saw them. In our minds, they were just white kids trying to make fun of us and rough us up. But they attack us and back us to the wall, shouting and screaming and we realised this was no joke. So, we ask for their IDs and they show they were indeed police officers, arresting us for crimes we did not even know about.’

Winston and his friends were taken to the police station where the officer, Detective Sergeant Derrick Ridgewell, look him hard in the face and told him there was no way they were ever leaving the station.

Winston was made to sign a false statement sighting him as a petty thief and also for attacking police officers on the subway. When he refused, Sergeant Ridgewell slapped him hard on the cheek and that was when Tre knew, ‘there was no way I was getting out of that if I did not sign his statement.’

Winston and his friends were dragged to court and were together given a sentence of he was arrested and falsely accused of stealing handbags. He t years. He was personally handed 2 years for pickpocketing and another 2 for fighting a police officer.

There was no way the young activist was taking this sentence, especially when he was innocent of the charges. He appealed and the best the court could do was to reduce the sentence, but keep all the charges intact.

‘This completely changed my life. The sentence was reduced to 8 months, but my life was different. Spent time preparing for trial, going to trial, and then an appeal, and finally going to jail. My wife could not handle it, so she left my kids with her relatives and moved to America.’

After Winston Trew was released, he said he lived a bitter and angry life. ‘How do you live a normal life, knowing you have been accused of something you never did. That just never gave me any peace.’

Picking up the pieces of his life, Trew got his kids back and stayed as a single dad, whilst his mum had them over the weekends. He landed a job at a university as social science lecturer and this was by word of mouth.’I doubt I would have been given the job if they had done a background check on me. I was so terrified of my past, I never told anyone about what really happened.’

Though he would not talk about the arrest and what Officer Ridgewell had done to him, he spent every waking minute of his life, researching and digging up any bit of information he could afford on him.

Detective Ridgewell had stubbornly earned himself a reputation for falsely arresting people and arraigning them before the court with false evidence. He was arrested for mailbag theft and was sentenced to 7-years in prison, he, unfortunately, died of a heart attack whilst in there.

In 1981, Winston Trew finally got his long-awaited opportunity. Stevenson Simmons was also falsely arrested by the officer and was jailed. During his appeal, Trew made his book (Black for a Cause … Not Just Because …: The case of the ? Oval 4? and the story it tells of Black Power in 1970s Britain) and research available on Detective Ritchwell available and by virtue of that, Stevenson had his sentence plunged and he was set free.

This gave Trew hope. He finally had an opportunity to clear his name. He could finally tell the world what exactly ensued on that day. On the day Winston’s charges were cleared he said: ‘The sense of relief, the excitement. It had finally over. I squeezed my wife’s hand so tight and she squeezed mine back. Thing is, back in 2003, I suffered a stroke and when I woke up in the hospital I could remember nothing. I did not know if I was married or not, but I could easily associate the hospital to a prison. That was how bad this arrest affected me.

My self-confidence was crashed. I lost my marriage, I lost my life as I knew it. I did get re-married, I did tell her about it, but I could tell no one. It was too embarrassing a story to tell, so I could not hide the joy and excitement when the court quashed his conviction.

My wife looked at me and said, ‘From now it’s you and I, no more Sergeant Derrick’ and till date I never mention his name anymore in our home. I harbour no hate, I just hate that it took me 50 years to clear my name.’

Afeez Agoro Oladimeji: ‘My 7ft height is a blessing’