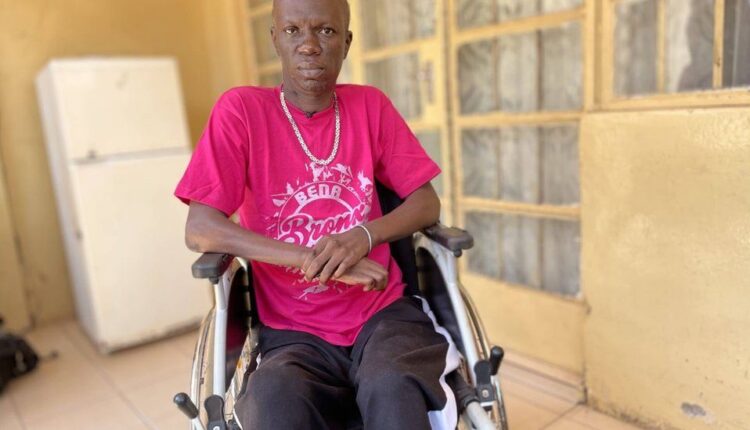 Yusupha Mbye sits opposite me in his wheelchair in a reflective mood on the veranda of his home.

Now 39, he was left paralysed in 2000 as a student after he was shot by members of Yahya Jammeh’s security personnel, he says.

He does not trust those currently in power to bring the perpetrators to book.

“The president himself failed me. He promised me that he will take care of me but broke his promise. Even meeting with him is a problem,” he says, adding that he has given up hope.

Under Mr Jammeh, The Gambia prospered economically, analysts say, but it was also plagued by serious atrocities including unlawful killings, mysterious disappearances of dissidents and even literal witch hunts.

Mr Jammeh, who went into exile in Equatorial Guinea, has previously denied any wrongdoing.

A commission set up to investigate his regime, the Truth Reconciliation and Reparations Commission (TRRC), has called for the prosecution of Mr Jammeh for alleged crimes committed during his time in office.

But some in The Gambia feel the prospect of that happening is a distant dream because of the current administration’s closeness to that of its predecessor.

Hailed as a democratic hero after he defeated Mr Jammeh, few could have imagined that President Barrow would give several Jammeh loyalists key jobs in his government five years later.

The government said it would suspend and sack former members of Jammeh’s regime who had committed crimes and were still serving in government – which essentially means that those who did no wrong could remain.

However, Mr Barrow’s government conspicuously spared Mr Jammeh’s intelligence chief, Ousman Sowe, who was accused of deliberately destroying evidence of atrocities including an alleged “Torture Chamber” in May 2017 when he carried out renovation work on the headquarters of the notorious National Intelligence Agency (NIA), now known as the National Intelligence Service.

The government brushed off the TRRC recommendation that Mr Sowe be banned from public office through a technicality. It indicated that the mandate of the commission did not extend beyond January 2017.

Mr Jammeh allegedly used the NIA and his paramilitary death squad known as the junglers to carry out serious rights violations. While many members of the junglers have been sacked, others remain in the security services.

In the run-up to the 2021 elections, Mr Barrow attempted to join forces with Mr Jammeh’s Alliance for Patriotic Reorientation and Construction (APRC) party, but Mr Jammeh rejected the offer.

Nonetheless, a faction of the APRC did form an alliance with Mr Barrow’s National People’s Party (NPP) which proved crucial for his political survival after breaking away from the seven-party political coalition that initially propelled him to power. President Barrow went on to win the 2021 elections with 53% of the vote.

The Gambia is deeply divided along political and ethnic lines and political scientist Essa Njie from the University of The Gambia wants the government to appoint ministers and heads of other institutions based on competence rather than political expedience.

“The Barrow government is taking credit for respecting civil and political rights, ignoring the economic and social lives of the people, ignoring the living cost of The Gambia,” he said. “There is rising unemployment in the country, especially among young people.”

This is echoed on the streets. A 45-year-old fruit and vegetable seller, Mariama Sillah, said everything was more expensive now: “During Jammeh’s time prices of things were much cheaper. Now prices have sky-rocketed and business is very slow.”

Mr Njie also said that while setting up the TRRC was commendable, he pointed out that Mr Barrow had only met the victims once.

He also accused Jammeh loyalists serving in the current government of ridiculing the TRRC, saying they insulted the commissioners and said the recommendations would be thrown in the dustbin.

The speaker of the National Assembly, Mr Jatta, is even still talking about the former strongman returning as a free man, Mr Njie said.

Information Minister Lamin Queen Jammeh justified the inclusion of members of the former administration in Mr Barrow’s government, saying the president believes in inclusiveness and not discrimination.

“The more we are able to put people together under one umbrella, the easier the operations of the state will become,” he told the BBC.

He also promised that “freedom of expression, freedom of opinion and freedom of association is being enjoyed by Gambians without any physical limitations except by limitations of the law. This is the bright new future that Gambians were looking forward to.”

Mr Queen Jammeh, who is not related to the former president, did acknowledge the economic struggles the country is facing, but blamed the global economic crisis and also pointed to its success in building new roads.

Nevertheless, victims of the Jammeh regime still feel aggrieved. People like Yusupha Mbye are hurt and betrayed when they see officials who were associated with Mr Jammeh still holding key positions and determining the country’s political future.

Mr Barrow’s government has promised justice for victims of rights violations, including the prosecution of Mr Jammeh, but until they see it with their own eyes, many Gambians remain doubtful it will ever happen.

Mustapha Sallah: ‘I almost died migrating to Europe. Now I am warning other…