Anas Aremeyaw Anas – ‘My manhood did not work for two weeks’ 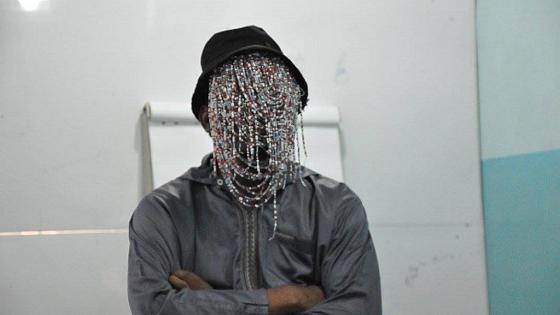 Renowned Ghanaian investigative journalist, Anas Aremeyaw Anas has gradually become the face of the fight of corruption in Africa and especially in Ghana.

Carefully covered with a beaded-cap to hide his identity, Anas, a trained lawyer turned undercover investigative journalist does his work with so much caution and detail, that with every release of investigative work he has done, the entire nation of Ghana is rocked to its core.

Anas grew up in a strict military home, with his father being a top military official. He admits; ‘I grew up imbibing the military discipline, where you obey before complain. Your commander is your officer and you have to obey what he says before anything else.’

He admits the many injustices he witnessed in the barracks especially during the times when Ghana was under military rule, was what formed his passion to want to ensure people always did the right things. ‘I kept asking myself, why will people be mistreated. There must be a profession that can help liberate people and stand up for people who are oppressed and abused. The balance was journalism and law and that is what I did.’

Anas also recounts growing up, selling with his grandma in the Nima market. He says his grandma dealt in the sale of materials used for voodoo (animal skin, crocodile head etc) and he believes most people think his ability to do his investigative work is linked to the use of these. ‘Some also say sometimes I disappear, but I don’t remember disappearing. I have only seen myself get out of very horrible situations and sometimes I come back to ask myself, ‘How did you do it?’

Recounting his very first undercover piece, Anas says he had to go undercover as a trader at the toll booth. There, he said police officers who were charged to ensure the traders did not ply their trade at the toll booth were the same people who took money from them at the end of each day, probably as the charge for allowing them to sell. According to him, this piece made the headlines as soon as it was published and it led to the arrest and dismissal of many of these police officers.

Anas Aremeyaw Anas has put together his own investigative team that helps him get completely immersed in his roles during his undercover work and even help him with his disguises. ‘We have a library of prosthetics, which includes old men, women, anything – I even pass convincingly as a woman. Normally, my team will look at the prosthetic, make sure I wear it, examine it, bring outsiders to also do same, and when the outsiders pass it, then we are ready to use the disguise.

Undercover journalism is not done by one person and I take a lot of inspiration from my team.’ Anas has gone as far as being impressively disguised as a rock.

The investigative journalist talks about his fairly extraordinary experience having to play the role of a mad man in his piece, ‘The Mad House,’ which he says is his best human rights piece yet. Recounting the aftermath of the role, Anas says he was given the drugs meant for the psychiatric patients for three days and after the documentary, he realised his male organ did not respond as it should.

‘My girlfriend will come to me and things will not respond. I checked myself and realised things were not normal. So, I asked around and I was told the drugs given to these patients could indeed lead to infertility. I immediately got worried.

So, I called up my doctor and spoke to him about it. He said to give it two weeks and if things were still not responding, he will know what to do. Luckily enough, two days before the two weeks elapsed, I was with my girlfriend when things started responding accordingly, and that gave me so much relief.’

The renowned journalist says, he operates on three principles – Name, Shame and Jail. He does not only publish, but submits his evidence to the police with a written report, and follows through to court to testify in the witness box to ensure his culprits are punished.

Many have criticised his work and especially the means by which he gathers his information, but Anas says he is a lawyer and knows just what to get in order to send his culprits to court.

A good number of people have also accused the journalist of editing his documentary and not sharing the original piece but he responds saying, ‘Look, I’m a lawyer. I know what the rules of admissibility require – that you hand over raw footage, else that piece of information will not be admissible in the court of law. If there was no raw footage, there is no way these people will end up in jail. Every person who stands accused uses entrapment as a getaway card, but I must put it on record, that in my entire life, I have never lost a case before. Why? It’s simple! Evidence is evidence and the law is the law.’

Anas Aremeyaw Anas admits he has crossed into morally dubious means in attempts to get his stories. He recounts having to play the role of the boyfriend of a lady, who was obviously in love with him, just so he could expose a Chinese mafia involved in sex trafficking. Anas says, he had to choose to ‘use’ the lady, just to get her to trust him, in order to break his story. He says he has since apologised to the young lady both in person and on-air and admits his job is always about choosing what is for the greater good of the people. The only thing he is unwilling to do for a story is to kill anyone.

In the entirety of his career, Anas has kept a tight niche of friends and colleagues and says the killing of team member, Ahmed Suleman, following the release of his ‘Number 12’ expose, which broke the African football fraternity and saw the dismissal of nearly 60 referees, was one of the lowest points of his career.

Ahmed Suleman was involved in ‘Number 12’ from start to finish and was murdered in the streets after he had gone to visit his family. However, Anas Aremeyaw Anas insists himself and his team run a tight ship and are always careful because of the kind of work they do.

The undercover investigative journalist has released his latest investigation for BBC Africa Eye, Corona Quacks, which exposes the sale of fake ‘cures’ for coronavirus in Ghana.

Anas has won many awards including the award for Anti-Corruption Star from Musicians Union of Ghana (MUSIGA) in 2020, Most Influential Investigative Journalist Award from The Press Foundation in 2016 and the Honorary Award for Excellence in Journalism in 2016 in the USA amongst other.

Terry Gobanga: ‘Gang-raped on my wedding day, lost my husband in 29 days’