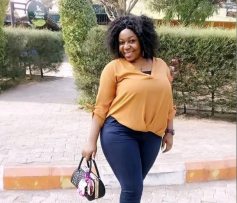 My name is Cecilia Ali-Ene. I am the elder sister to Maria, the 31-year-old graduate of Theatre Arts, who was killed by her ex-boyfriend, in Abuja, Nigeria.

My sister and her boyfriend had been dating for about 10 years. Those 10 years were years of turmoil and agony for Maria as the man would hit her at the slightest provocation and even push her out. Many of Maria’s friends would call to tell me and my family about the way Ben was treating my sister and how he had no regard for her. We would call Maria and tell her to come back home as they were not even married, but she would say Ben would change, that he only needed some time.

Even when she gave birth to her daughter through Caesarean section in their first three years or so of dating, this man still beat her, not minding that the wounds had not healed. You can imagine the wickedness. When I learnt of it, I threatened to get Ben arrested, but she knelt down to beg me to forgive him because he would change.

While in the relationship, this man refused to marry her. He avoided every conversation about marriage until she found a new man, who cared for her and was ready to marry her almost immediately despite her daughter. That was when he knew he was now serious with my sister. This is the result. He killed her.

He called her one day to ask her to leave her new fiancée and come back to him. She refused. He told her that he would either kill the new lover or her. She told my parents and they thought it was a joke. I even called him and told him that if anything happened to my sister, I would hold him responsible. He has fulfilled his promise; he has killed my sister. My sister was in the house on Sunday, May 22, with her new fiancée, having some discussion when they heard a knock on the door of her house inside an estate in Abuja. Maria peeped through the window and didn’t see anybody apart from the kids playing nearby. The person knocked again, and when she opened the door, it was Ben asking to see her, so they could talk about their child. It was surprising.

I remember she told me that she had been begging Ben to come to take custody of his kid, who is now seven, but he refused. So, coming out of the blues to suddenly ask after the child was surprising. I would like to note now that my sister was the one taking care of this girl alone without any help from this man (Ben). He doesn’t even know how this girl feeds or what she wears. This happened around 5pm.

Ben requested that she ask the guy to leave, but she said no. He then asked her to follow him to his car so they could talk about the welfare of their daughter. They were there discussing from that time till around 9pm. Maria’s fiancée was still waiting. When she got back to meet her fiancée, she was shivering. He (fiancée) asked her why she took so long, and she told him that Ben threatened to kill her if she didn’t leave the house and return back with him (Ben). According to the fiancée, Ben showed Maria a gun and threatened to shoot her if she didn’t come back to him. He said Ben slapped Maria and locked her in the car, threatening her and raining abuse on her. She was really distressed when she spoke.

The next day (Monday, May 23), around 8.30pm, Ben called me. I refused to pick at first, because we were not on talking terms. It was my 10-year-old son who begged me to pick up the phone, because, according to him, it might be important. When I answered the call, Ben asked me where I was and I said I was in Abuja. He said he needed to see me right away. I ended the call. He called again to say it was really important and that he needed my presence because my sister’s blood pressure had risen dramatically. I was shocked because, the last time I checked, they didn’t live together.

He requested that I meet him in the hospital, where my sister was admitted. I was a bit reluctant because I thought he was only tricking me out so that he could ask me to beg my sister to accept him back as he always did, but after giving it much thought, I decided to go to the hospital. I went there with my son.

The hospital staff didn’t allow me to see my sister for about five minutes. They said we should wait outside, he (Ben) told me that he and Maria were arguing in the car and he hit the vehicle in anger and his hands ‘mistakenly hit my sister’ and she started throwing up. It was not clear. The story was not adding up.

Ben said the car was static. He just got angry during the argument and hit the car and she started vomiting just like that. How that is possible, I don’t know. I didn’t believe him. I was shivering because I knew something was wrong with my sister somehow, because I know how deadly his anger used to be. The doctors now came and told me to go into the ward and see my sister.

When we got in, my sister was already dead. I didn’t understand it. By the time we got out, Ben had fled. We asked the doctor what happened, he said somebody brought her in and had left. The doctor said he wrote out a phone number, which had been unreachable for hours..