From drug addict to psychiatric nurse: The turnaround of Anthony Brown 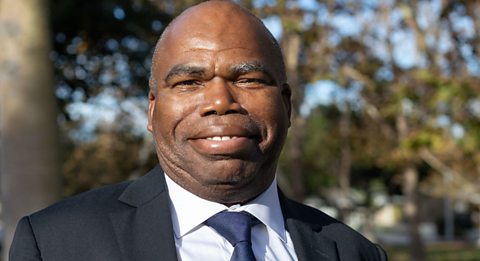 At the tender age of 14 years, very few people think along the lines of running away from home and trying to survive on their own.

Anthony Brown, by virtue of the constant abuse he had been subjected to from infancy, took this decision and preferred living on the streets and fending for himself to staying home with his mum and siblings.

Having been born into a poor home and a drunken mother, Anthony says his mum would often beat he and his siblings with an extension cord and in his opinion, that was how she expressed her love for them.

Anthony Brown narrates events leading to his decision to run away from home saying, ‘I had been abused so much that I understood the only way to escape was to run away. The worst form was one day when my mum had me lie on the carpet and she would beat me with the extension cord and rest her foot on my neck, smoke and then get back to beating me again. She did this cycle a couple of times and once when she took a break, I just got up and run. I stayed in the closet at a friend’s house, thinking I was safe and before long the closet open and there she was with her extension cord. I was beaten in the closet and out of it and this was when I decided to just run from home.’

At this point, the fear of being beaten as a child was simply an emotion Anthony could not relate to and he did not care how he survived, but he was sure he would.

Anthony left and decided to stay in abandoned houses which he would furnish with furniture made from crates. The state of Ohio has the characteristic of getting extremely cold, so he would have to break up his furniture and use as firewood to warm up the room during the winter.

After earning what was to him, his liberation and freedom, the young lad joined carnival trains and would be away all summer, living in and under the carnival buses. At the carnival, ‘It was each one for himself and a struggle for survival. I was strung up on drugs almost all the time and there was no beating out there though, but my mum’s continuous harsh treatments had prepared me for that kind of life, so I survived.’

The runaway prodigal son carried on with this lifestyle until he turned 18, returning after each festival to visit his mum and siblings back at home. During one of his return trips after he had just turned 15, Anthony’s mum enrolled him in the navy in an attempt to get him to stop leaving home. But after a few months, Anthony says, ‘I was given an honorary discharge from the navy and I later found out they had found my age and apparently my mum lied on the forms to get me into the navy.’

At 18, Anthony Brown decided to permanently leave his mum and siblings and head out to Lynwood. He always found ways to make money, only to end up using it on drugs and feed on food from dumpsters.

Later, Brown got a job in a fast-food restaurant and there he used most of the money from his paycheck to buy drugs because it was all he needed. He was moved around position-wise in the restaurant and ended up manning the till. As expected, Anthony started to steal from the entity and even use the restaurant as a sale point for his drugs.

Just before he was discovered, Anthony says,’I asked for a transfer to another entity of the franchise in another city when I knew I was almost caught. Here, I did the same. Sold drugs and stole money from the business. But over here, the manager of the fast-food was addicted to coke as well, so he overlooked a lot of the things I did and just kept pushing me through promotions.’

Anthony Brown moved in with this manager and they together lived a high and drugged life nearly every day. He was arrested a couple of times by the police and had been in and out of prison so many times. Anthony and his manager had a misunderstanding over some coke which disappeared in their shared apartment, and that led to Brown losing a second home and having to live back on the streets again.

A few years passed and Anthony received a call from his brother, telling him their mum was sick. A young drug strung Anthony Brown could not care any more than he had in the last few years. ‘I had seen my mum survive a gunshot to her head when I was only 9 years old. Saw her in a pool of blood and her grey matter right out, so I expected her to survive this.’

Another call came from his sister, then his mother, his brother again and finally a call to say his mother had died. Anthony says he raked up every little penny he could to drag himself over to the funeral, showing up obviously very high and drunk to understand anything. ‘I felt nothing. I was very high and all I knew was I had to be there for my mum’s funeral so I was. I felt no sadness, no remorse, I just found myself in a strange place I was not familiar with.’

When he returned from the funeral, his life took a turn for the worst. In his own words, ‘I had nothing to lose and to me, there were no rules for society. I recklessly did what I wanted to do.’ It was during one of his run-ins with the police, that the officer asked Anthony if he needed some help.

Anthony was one of only 4 black people who lived in the town and the police officer had realised he just needed help to get better.

The young man was introduced to a lady, who fed him and took him to a treatment centre, leaving him with only these words, ‘If you decide to leave here, please walk through the gate and do not jump the wall.’

This was a new and unfamiliar place for Anthony. Everyone showed him love and cared genuinely for him. He stayed sober and found peace in God. ‘I had come from an abused family and was never exposed to this kind of way. I was very surprised with how everyone treated me so nicely.’

Anthony started to get his life back together and focus on making things better for himself. He had a counsellor who told him he whined a lot, simply because he complained about having to take care of himself and his living space in the treatment centre – a responsibility he has never known since birth.

Anthony Brown started school again in 2001 and did not stop until 2015. He went on ahead to get his GED, get his nursing certificate, get a degree and on and on Anthony kept going.

Today, Anthony Brown is a psychiatric nurse and college professor. He has written a book about his remarkable journey called: From Park Bench to Park Avenue.

Have you met the most stylish man in Africa?