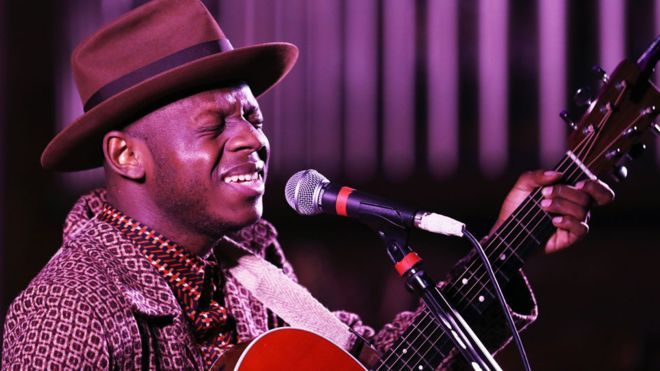 Modest and quietly spoken but with a penchant for the nattiest threads this side of the Tana River, JS Ondara has, in the space of several years, moved to America, taught himself how to play guitar, released an album with Decca Records and supported rock royalty on a US tour.

“It’s a little overwhelming in some ways, so I try not to think about it so much,” he explains backstage at The Great Escape Festival in Brighton.

“Because when I think about it, I get really emotional. It’s just like, ‘Whoa, this is not real life’.”

There he is mistaken. His fairytale rise is very real as are his affecting vignettes of life as an immigrant in the United States, laid bare on his debut album Tales of America – which was released in February.

Weaved in among his tales of love and yearning are songs like the provocatively-titled God Bless America, which reveals Ondara arguably at his most personal as he pleads: “Will you let me in, or are you at capacity?/Will you set me free, are you holding on to history?”

“I think, being a folk singer travelling around singing songs, I get to experience all parts of America and the experience is usually positive,” he says.

“Maybe that’s just because I’m playing songs that people like and maybe that’s not a very objective perspective.”

He adds: “But there’s definitely a growing intolerance towards immigrants at the moment and immigration, and as an immigrant myself, I get caught up in that emotionally. And I’m hoping that, you know, by sort of talking about it, we’ll sort out if we can, you know…”

The intolerance Ondara speaks of finds itself squarely back in the news after the US President Donald Trump was criticised for his recent attacks on non-white US congresswomen – all US citizens and, bar one, all born in the US.

“Maybe it’s a backlash from the presidency and all the toxicity that has brought, has sort of inspired a group of people to speak up,” says Ondara of his songwriting.

“In some ways, maybe this good thing that does come out of these troubling times is people are rising up, more people are being more audible. They want to be heard, and protect the rights of minorities and people who, historically, may not have equal rights.”

The singer was born and raised in Nairobi. He got into the music of artists like Jeff Buckley as a teenager and enjoyed singing, but his family could not afford instruments. Ondara moved to the US as a student just six years ago after winning a green card lottery, settling in his idol Bob Dylan’s home state of Minnesota and teaching himself to play as he pursued a career in music.

His dream was not something he shared with his family. “I never told them, you know, I lied. I told them I was gonna go to school. Because if I told them what my true intentions were, they wouldn’t let me leave. They would have thought I absolutely was just insane.”

From there, Ondara began singing and playing regularly at open mic nights and started uploading covers of favourites like Dylan, Nirvana and Neil Young to YouTube.

He says he was drawn to the quiet honesty of folk music and its ability to connect to real social issues. His songwriting recalls the work of other stars too like Paul Simon, Cat Stevens and of course his idol, who recently performed in London’s Hyde Park.

“I think one of the reasons I found a kinship with his [Dylan’s] music is because it was already something I felt passionate about.

“I suppose my songs at the moment are more influenced by social events, and things are happening around the world. And, you know, sort of becoming some kind of adult and facing responsibilities and finding what my place is in the world and how I can contribute positively in the world.”

There are a few oddities in there as well, like on his track Days of Insanity, which features an almost inaudible Sgt Pepper-era Beatles-esque Ondara sing: “There is a bear at the airport, waiting on a plane/There is a cow at the funeral, bidding farewell/There is a goat at the terminal, boarding the C train/There is a horse at the hospital, dancing with the hare.”

That ability to find poeticism in the surreal may help explain Ondara’s incredible sartorial style, which is as much a part of his identity as his music, matching vintage tailoring with bright colours and vibrant patterns and an ever-present wide-brimmed hat – another tribute to Dylan.

“I’m drawn to bizarre things. And I think my idea of fashion is not too different from my idea of music is trying to find when I’m making my records.

“It’s borrowed from old music, you know, it’s carrying on the tradition of old music, but it’s interpreted in a way that it can exist in the current zeitgeist. And the same thing with fashion is, I try to wear things that are old fashion, but I’m sort of integrating them in a way that they can exist now.”

Ondara is currently on a tour of Europe, Canada and the US, and actually supported Neil Young at a handful of dates earlier in the year.

But one place he is yet to play is his home town of Nairobi, something which will be “a moment” for him, and would at least convince his family that his path less travelled was the right one.

“I think they’re definitely happy for me now, though they were puzzled in the beginnings of my career. Like, ‘What are you doing? Stop it, go to school’. I think they sort of gave up and they’re like, ‘OK, I get it, he’ll do what he wants to do, he’s an adult.

“They don’t really understand that what it is that I do, but they’re happy that I’m happy.”

These electric cars made in Africa will take over the world