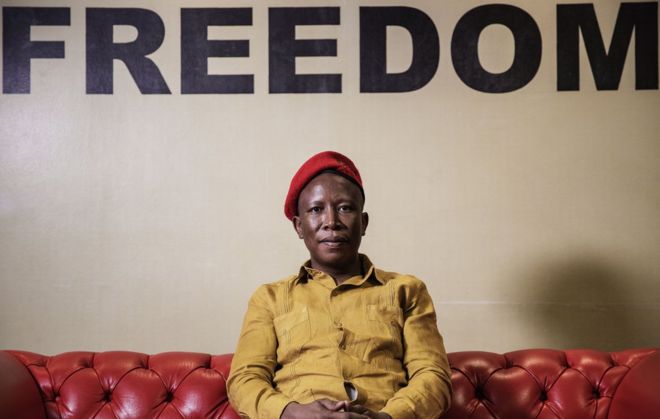 Juilus Malema may never be able to shake off the “firebrand” label, but the 38-year-old leader of South Africa’s second largest opposition party can no longer be seen as simply a hot-headed politician.

The “son of the soil”, as he has been styled by his Economic Freedom Fighters (EFF), has spent the last six years turning the party he founded into a disciplined force that has set the agenda in some policy areas.

Expelled from the governing African National Congress (ANC) in 2012, Mr Malema, or “Juju” as he is sometimes called, has positioned the EFF as the true inheritor of the ANC’s radical agenda and has exposed the governing party’s left flank.

The relentless focus by the EFF’s commander-in-chief on the inequality in South Africa, and the failure of the ANC to redistribute land from the white minority to the black majority, has cost support for his former party, which led the fight against apartheid.

The EFF took just more than 6% of the vote in 2014 in its first run in a general election, but its influence seems to outweigh that figure.

The 25 MPs dressed in red boiler suits and hard hats in parliament along with their staged walkouts and Mr Malema’s willingness to come out with quotable lines has meant he and his party have grabbed the attention.
Hate speech

Ever since the start of his public life he has not shied away from controversy, offending a wide range of people from women’s rights groups, to white farmers, to his own political bosses.

He has twice been found guilty of using hate speech – in 2010 and 2011 – first for comments he made about the woman that accused former President Jacob Zuma of rape and then for singing the song “Shoot the Boer (Afrikaner)”.

But age does not appear to have mellowed him and neither has studying for an honours degree in philosophy, which he completed in 2017.

When talking to supporters about the land issue in 2016 he warned: “The land will be taken by any means necessary.

“We are not calling for the slaughtering of white people. At least for now. What we are calling for is the peaceful occupation of land and we don’t owe anyone an apology for that.”

In a 2018 interview with Turkish broadcaster TRT World he defended the comments and described anyone who thought that this might sound genocidal as “cry babies”.

But his supporters enjoy the combative rhetoric, and Mr Malema remains an inspirational orator whose aggressive focus on the rights of poor black South Africans has earned him their love.

As a result, the EFF’s popularity has been growing. In the 2016 municipal elections the party won more than 8% of the national vote.

Born in 1981, Mr Malema was raised by his mother Flora, a domestic worker, in Seshego township in the northern Limpopo province.

He says he joined the ANC’s young pioneer movement at the age of nine, where he was trained in armed resistance, and it took him just five years to become the regional head of the ANC Youth League.

He then gained a foothold in the student movement, before eventually becoming national leader of the Congress of South African Students in 2001.

But it was his election as ANC Youth League leader in 2008 that made him a key player in national politics.

His earliest actions as leader were to noisily campaign for Mr Zuma to take over – first as ANC leader and later as president – telling a crowd of supporters that he would “kill for Zuma”.
The land issue

But Mr Malema’s relationship with Mr Zuma soured soon after the latter became president in 2009. Mr Malema accused his former ally of ignoring the poor voters who had propelled him to power.

[bs-quote quote=”Great things in business are never done by one person. They are done by a team of people.” style=”style-7″ align=”left” author_name=”Julius Malema” author_job=”Leader, Economic Freedom Fighters” author_avatar=”https://humansofafrica.net/wp-content/uploads/2019/05/Malema-6.jpg”][/bs-quote]

And the idea that the ANC has distanced itself from its support base and core values has remained his theme.

In an emotional tribute last year at the funeral for Winnie Madikizela-Mandela, the anti-apartheid fighter and Nelson Mandela’s ex-wife, he addressed her request that he return to the ANC.

Talking to the thousands of mourners in front of President Cyril Ramaphosa and the rest of the ANC leadership he said: “Mama you said to us we must come back to the ANC, we heard you. But which ANC do we go to? Of the same people who sold you out?”

When it comes to the key issue of land ownership the EFF has set the agenda.

In February last year, Mr Malema launched a debate in parliament on land reform saying: “The time for reconciliation is over; now is the time for justice”.

The ANC then backed the EFF’s motion that sought to change the constitution to allow for expropriation of land without compensation. President Ramaphosa has said the issue will be tackled and the ANC admits in its own manifesto that “the land question has not been fully addressed”.

But Mr Malema has also been accused of being a hypocrite.

In 2013, South Africa’s revenue authority said he owed more than $1m (£865,000) in unpaid taxes. There were question marks over where that money came from.

In order to pay the tax arrears, the radical politician had to sell an unfinished mansion in Johannesburg’s upmarket Sandton suburb, which included a cinema room and a cigar lounge.

Mr Malema has also had to face fraud and corruption charges which, after three years, were thrown out of court in 2015 because of lengthy delays in bringing him to trial, a judge ruled.

The accusation related to a government contract but he always denied the charges and said they were politically motivated.

What ever has been thrown at the radical opposition leader over the last decade – and there has been a lot – it has not dented his appeal. Polls suggest that it could gain at least 10% of the vote, ensuring that Mr Malema’s voice will continue to be heard for some time to come.