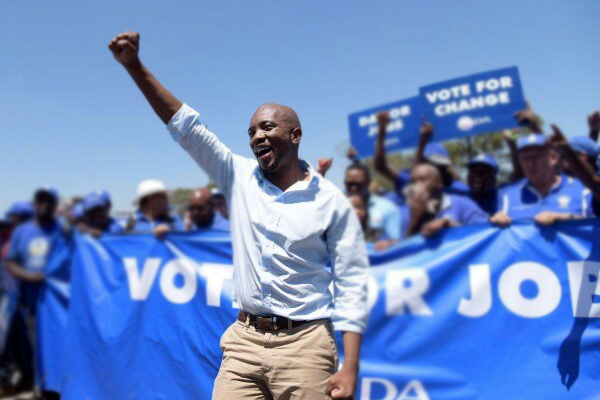 A slim 38-year old former choirboy with an easy charisma, a pastor’s resonant voice, and a reputation for unwavering politeness, surprised a large group of South African politicians earlier this year by telling them to “shut up”.

To many in the room it felt like an out-of-character outburst by Mmusi Maimane, leader of the official opposition Democratic Alliance (DA), and it polarised those being rebuked at February’s meeting of the party’s federal council in Cape Town.

For some, this was the long-awaited proof that Mr Maimane – a black politician dogged by allegations that he was “parachuted” undeservedly into the top job in 2015 because of his race rather than his abilities – had discovered his backbone and, with it, the determination to unite a feuding party and guide it towards electoral victory.

A smattering of applause echoed around the council chamber.

But to Mr Maimane’s critics the “shut up” moment felt simply awkward and insincere – as though one of their leader’s advisers had told a famously “nice” but dithering politician that he needed to toughen up and exert his authority, and this was his stilted attempt to follow that advice.

So, who is the real Mmusi Maimane? A conviction politician who was thrust into the spotlight and is steadily growing into one of the most important political roles in democratic South Africa? Or an out-of-depth novice with neither the ruthlessness nor the intellect to break the relentless grip on power of the African National Congress (ANC)?

It is now 19 years since anti-apartheid leader Nelson Mandela, who became South Africa’s first democratically elected president in 1994, dismissed the DA as the political home of “white bosses and black stooges”.

South Africa’s largest opposition party has been wrestling ever since to shake off that image in a country where the public still tends to vote along racial lines – the black majority endorsing the former liberation movement of the ANC and its various allies and off-shoots, and the white minority backing the DA, a party which emerged from the liberal white benches of the old apartheid parliament.

Brought in partly to challenge that racialised perception, Mr Maimane exudes the confidence of someone who has been comfortable in a leadership role from an early age.

He shrugs off the suggestion that, with no experience in local or national government, he is unqualified to lead the DA.

“I think leadership competence isn’t just a question of experience,” he tells the BBC.

“He’s very ambitious,” confirms Thabo Shole-Mashao, a friend who first met him as six-year-old schoolboy who stood up for him in their classroom in Soweto.

Mr Maimane grew up in the old black township on the outskirts of Johannesburg during the last decade of racial apartheid.

“He believes in a non-racial, united country. It’s not for the cameras – it’s deeply rooted in his faith.”

In theory, Mr Maimane and his party should be well-placed to win South Africa’s upcoming elections.

The DA is a modern, energetic, centre-right party which has steadily increased its share of the national vote in successive elections.

It already controls one of South Africa’s nine provinces and a growing number of municipalities – including the big cities of Johannesburg, Cape Town and Pretoria – where the party has earned a reputation for good governance, if not always for political acumen.

Crucially, the DA is running against a governing party that after 25 years in power appears to many to have lost its way, presiding over a decade of economic stagnation and the soaring corruption known here as “state capture”.

And yet, as Mr Maimane acknowledges, all the opinion polls indicate that his party remains in distant second place, far behind the ANC.

Plus, there are the specific circumstances of modern South Africa, which is run by a former liberation party that has, he argues, resorted to increased “racial mobilisation” to distract from its recent failures.

“Don’t waste your vote on the white man again,” the ANC’s secretary general recently told voters, in reference to the DA.

Officials from the ANC, and the small but more radical Economic Freedom Fighters, openly dismiss the country’s official opposition as lackeys of “white monopoly capital,” and Mr Maimane as a “garden boy” working for the interests of South Africa’s white minority.

If such jibes hurt, Mr Maimane tries hard – some say too hard – to brush them off, avoiding the sort of angry verbal jousting that has always been a feature of South African politics.

In 2005, Mr Maimane married a white woman he had met years before at church. They have two children.

Today, he describes the fight for a non-racial South Africa as his “historic mission”.

“That is a cause that organises my life and I’ll fight for it until I die,” he tells the BBC.

But it is a fight that Mr Maimane is waging not just against rival parties, but with the DA itself.

Over the years the party has been repeatedly accused of alienating black voters, not least when its former leader Helen Zille appeared to praise elements of colonialism in what she later conceded was a clumsy and “insensitive” string of tweets.

colonialism in what she later conceded was a clumsy and “insensitive” string of tweets.

colonialism in what she later conceded was a clumsy and “insensitive” string of tweets.

More recently, the party has been split over the extent to which it should acknowledge or ignore race in its economic policies – a debate which provoked the “shut up” moment earlier this year.

“The DA needed to change. We needed to disrupt the DA,” says Mr Maimane.

So, is he succeeding?

His critics say the party’s strength is built on its reputation for competent governance and that Mr Maimane, with no such experience and with a reputation for vacillation on key policy issues, has had little measurable impact on the DA’s support base.

But Mr Maimane, like many others, insists that his leadership has been pivotal in expanding the DA’s reach “in communities it wouldn’t have grown in before”

Focusing on the economic heartland
The next few weeks could decide Mr Maimane’s political fate.

Much hinges on the election result in South Africa’s richest province, Gauteng.

If the DA, already in control of the Western Cape, can push the ANC below 50% in the nation’s economic heartland then it has a chance to take control of the province through a coalition government.

That would present the party with a feasible springboard for nationwide victory in 2024.

But the ANC’s fortunes have been revived – at least in the short term – under the leadership of President Cyril Ramaphosa, who has set about tackling the corruption that flourished under his predecessor Jacob Zuma.

“A leopard doesn’t change its spots,” says Mr Maimane, who insists the ANC is broken beyond repair.

But he knows he has a hard fight to convince a majority of South Africans that he and his party are the answer.

“I’m urging South Africans to let the centre win. Change is uncomfortable, but we need it.”