Nigeria’s government has secured the release of Zainab Aliyu, an undergraduate who was arrested in Saudi Arabia for alleged drug trafficking.

The Federal Government has secured the release of Zainab Habibu Aliyu who was arrested in Saudi Arabia for alleged drug trafficking. Details soon from Ministry of Foreign Affairs. #FreeZainab

On Monday, President Buhari had ordered the attorney general to intervene in the matter.

The news comes as hundreds of her fellow students gathered at Maitama Sule University in the northern city of Kano on Tuesday to demand she be freed. 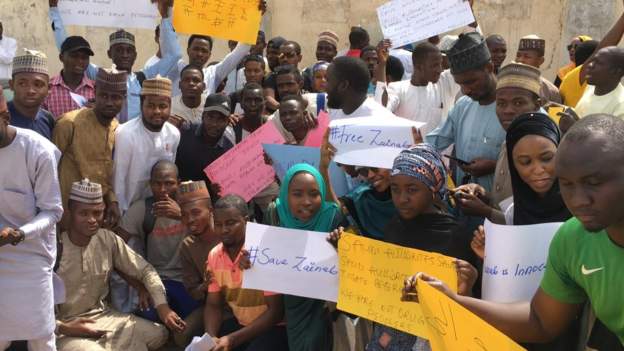 Ms Aliyu was arrested at her hotel in Medina by Saudi police last December, shortly after arriving for the lesser hajj with her family – and remained in detention until Tuesday.

The Saudi authorities had accused her of trafficking 2,000 packs of Tramadol in a bag tagged with her name left at the airport.

Recently, the National Drug Law Enforcement Agency of Nigeria (NDLEA) said it had uncovered a cartel that planted illicit drugs in travellers’ luggage.

An investigation was launched after Ms Aliyu’s father reported the case to them and it led to the arrest of six officials at Mallam Aminu Kano International Airport.

They have been accused before a federal high court of framing Ms Aliyu. They have yet to enter a plea to the charges.

Since the news of the arrest of airport staff came out, Nigerians have been demanding action.

Earlier this month, a Nigerian woman was executed by the Saudi authorities for drug-trafficking.

Fighting Ebola in a war zone