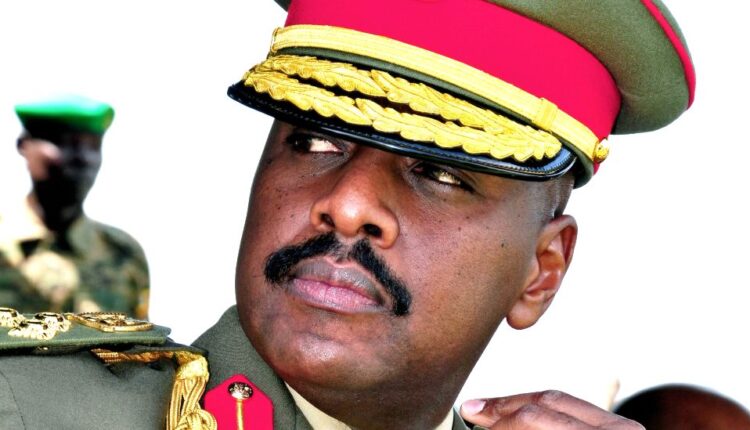 Trained at prestigious military academies around the world, the son of Uganda’s President Yoweri Museveni has turned out to be an army general who has gained notoriety for politically explosive tweets that have sent local and regional politics into a tailspin.

Gen Muhoozi Kainerugaba boasted that his army could capture the Kenyan capital, Nairobi, in under two weeks, and warned Egypt’s rivals that Uganda would enter any war on the side of the North African state, while on the domestic front he shows interest in succeeding his 78-year-old father. He has defied an order to stop stoking controversy on Twitter by tweeting: “I am an adult and NO ONE will ban me from anything!”

“He wants to prove a point to his supporters that he can be independent and make decisions on his own. He however, remains a son who has to heed to his father’s instructions,” he said.

In power since 1986, Mr Museveni has long been suspected of grooming the 48-year-old general to succeed him to entrench what critics call monarchic rule in Uganda.

“That family controls Uganda. His mother is in the cabinet, and he is the prince, waiting to succeed his father,” said Peter Kagwanja of the Kenya-based Africa Policy Institute.

Prof Kagwanja regards him as an “agent provocateur” who tweets to gain access to African leaders, and to advance Uganda’s political objectives: “Muhoozi provokes, then his father arranges for him to go and apologise, and in this way he is introduced into the circles of leaders.”

This strategy was on display when Gen Kainerugaba riled Ethiopia’s government when he came out in strong support of Egypt at a time when it is in a bitter dispute with Ethiopia over a mega dam being built on a tributary of the River Nile.

He later hailed the “unconquerable spirit” of the Tigrayan forces involved in a brutal war with Ethiopia’s federal troops, and said that “those who raped our Tigrayan sisters and killed our brothers must be punished!”

Far from turning him into a pariah in Ethiopia, the tweets opened the way for him to visit the country to meet Prime Minister Abiy Ahmed and senior military officials earlier this year.

It led to the general changing his tune, hailing Mr Abiy – who, at 46, is younger than him – as “my brother”, and saying that “we believe in African solutions to African problems”, expressing a view similar to that of the Ethiopian leader to cement his credentials as a pan-Africanist.

‘Father and son work together’

Gen Kainerugaba is fond of using family terms, revealing in the process how he views various African leaders and what his relationship with them is like.

He describes Rwanda’s President Paul Kagame as “my uncle”, and has visited him on his farm. When a dispute led to the closure of the Rwanda-Uganda border, he tried to mend relations by arranging a meeting between his father and “uncle”.

When it came to Kenya, Gen Kainerugaba tweeted that he had spoken to former President Uhuru Kenyatta after he stepped down at the end of his two terms in August: “My only problem with my beloved big brother is that he didn’t stand for a third term. We would have won easily!”

This caused a furore among Kenyans on Twitter, who accused the general of attempting to undermine their democracy.

Prof Kagwanja said the general’s intervention came against the backdrop of strained relations as the Ugandan president disapproved of Mr Kenyatta backing veteran opposition politician Raila Odinga in the election campaign, seeing him as an “imperialist project” of Western powers.

Mr Museveni preferred William Ruto, who went on to win the presidency after a bitter contest.

“The tweet was to appease Kenyatta so as not to lose him because he is still an important actor in Kenyan politics,” Prof Kagwanja said.

“Father and son were working together. Muhoozi projects himself as the opposite to his father, of being a chaotic person – that makes his father look good.”

Gen Kainerugaba also put out a more incendiary tweet to his more than 600,000 followers, saying that it “wouldn’t take us, my army and me, 2 weeks to capture [Kenya’s capital] Nairobi”.

Prof Kagwanja said the tweet evoked memories of then-Ugandan dictator Idi Amin’s claims in the 1970s that a large part of Kenya belonged to Uganda, and was a reminder of the need to resolve the long-running dispute between Uganda and Kenya over the rock island of Migingo.

As he faced a backlash from Kenyans who trolled him for his “reckless” comments, the army commander urged them to “relax”: “I would never beat up the Kenyan army because my father told me never to attempt it!”

The Kenyan government did not publicly comment, but as the controversy continued to escalate, Mr Museveni was forced to phone Mr Ruto to apologise for his son’s “mistake”.

This paved the way for Mr Ruto to attend celebrations to mark the 60th anniversary of Uganda’s independence, and for Gen Kainerugaba to offer his “unreserved and complete support in solving old outstanding problems“.

With the Ugandan military also expressing concern about their “tweeting general”, Mr Museveni moved to placate them by sacking him as commander of land forces.

“Senior generals raised the issue of discipline, a fundamental in the army, and Mr Museveni had no choice,” Mr Serwanjja said.

“If it was someone else, they would have been court-martialled.”

But Mr Museveni also seized the opportunity to promote his son to the highest-ranking officer – a four-star general – while retaining him as his adviser.

After graduating from the UK’s elite Sandhurst military academy, Gen Kainerugaba began to climb the ranks in the Ugandan army, which he officially joined in 1999. Married with four children, he makes much of his Christian faith and family values on Twitter.

He played a pivotal role in the formation of the Special Forces Command (SFC), a unit responsible for his father’s security. It has also been accused of widespread human rights abuses – including detaining and torturing opposition activists.

“Muhoozi rose through the ranks to command his father’s bodyguards in 2008, a post he held until 2017. He returned to the unit during the violent 2020 election season,” wrote Ugandan journalist Musinguzi Blanshe in The Africa Report.

Mr Serwanjja said that after being sacked as commander of land forces, it was unclear how much influence the general now wielded in the military.

What is clear is that Mr Museveni has dashed any hopes that his son had of succeeding him in the 2026 election after his old comrades – including the vice-president and interior minister – launched a campaign for him to seek office again.

This was a major blow for the myriad groups that had sprung up on Twitter – under hashtags such as #MKArmy and #MK26 – to rally support for the general to take over from his father.

This was backed up by a grassroots campaign that saw celebrations to mark the general’s 48 birthday in April, and his support for various initiatives in what appeared to be a bid to boost his profile, especially among the youth.

“Muhoozi has got a big army of young people. His supporters are trying to tap into the young electorate,” Mr Serwanjja said.

This is seen as vital to counter the growing popularity of young opposition leaders like musician-turned politician Bobi Wine whom the general tries to belittle by referring to him in Swahili as “Kabobi”, meaning “small Bobi”.

Mr Serwanjja feels the general is being “overly ambitious” in his hopes to get on the ballot for 2026: “President Museveni will stop at nothing, including sacrificing his own, to stay in power.”

And if Mr Museveni confirms that he will run for the presidency, his son – known as Generational Supreme Leader to some of his Twitter followers – is almost certain to campaign for him.