My 15-year-old son was killed on his church premises 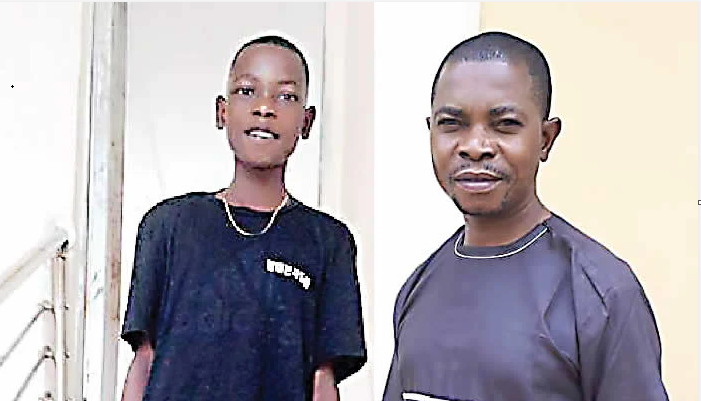 My name is Festus Ugbotor. I am 45 years old. I am an indigene of Uromi Local Government Area, Edo State, but I am based in Agbor, Delta State in Nigeria. I am a vulcaniser (faulty tyre repairer). My son was 15 years old and was set to take his Junior Secondary School Examination when he died.

Whenever he came back from school, he would join me at work. That Friday (May 27), I even left the shop for him to take charge while I went out to fetch one or two things. He cleaned the shop before I got back and we had to prepare him to attend the youth camping conference slated to hold at the Anglican Cathedral Church of Ascension, Diocese of Ika, Boji-Boji Owa, Ika North-East LGA, Delta State. This son of mine was a natural ‘star boy’. He was wiser than his age and so he was always asked to represent the church at quiz competitions. As a child in the children’s department of the church, he had started answering questions for adult grade. I was the one who personally took him to the church to join the competition. We walked hand-in-hand to the church that evening and I bade him goodbye. This was around 6.30pm.

The following day, being Saturday (May 28), he called and requested that I bring a particular outfit to the church for him. He said he needed the outfit to participate in a quiz competition at the conference. I did as he requested. Since the conference venue is just about 10 minutes away from home, I walked down there to see him and gave him the clothes. I didn’t know that was the last time I would see him.

When I saw him that morning, he looked just fine. He hugged me and I gave him some money for upkeep and I left for my workshop. I was surprised when I got a call around 1am on Sunday from the conference organisers, telling me that my son had fainted and was unconscious. It was not clear to me how my son whom I saw the previous day would just die in their care overnight. He (organiser) told me to rush down to the Anglican Hospital, El-Pohar, Agbor, to see my son. I was so distressed. My wife and I rushed out that night notwithstanding the insecurity in the country to see our son at the hospital but they (organiser) didn’t let us see him.

I don’t know why they denied us access to our son. We were just outside panicking, not knowing what was going on. When I forced myself into the room, I saw my son covered with linen. He had died. I told the doctor on duty to open him up for me to see him. He refused and told me to leave. I don’t know why. They simply just said it was my son that was there and I should go out.

I quickly called my brother, who is a lawyer, and he drove down there and entered the ward where my son was laid. They told him that my son was playing with other kids and suddenly slumped. According to the church, before they would rush him to the hospital for treatment, he had died. This is just 10 minutes’ drive from the church. How can my healthy son just die like that? It is still a mystery to me.

One of the doctors, as a means to, maybe, assuage me, said my son was still breathing. He encouraged me to go home and come back at daybreak to see him. Later on, the bishop of the diocese came and said he wanted to pray to bring him back to life. I was outside, lamenting and rolling on the floor.

That night, I couldn’t even think well. In the morning, we began to ask the programme organisers questions. They said the quiz competition, which started in the morning of Saturday, finished around 12.30am on Sunday. What kind of quiz is that? After they closed that morning, they left the children outside playing; they, too, went up to do what concerned them. One of the children who were present with my son, when asked to explain what happened, said my son and other kids were playing some ‘hard play’ and they said anyone who couldn’t withstand it should not join them. According to the child, as they were playing, my son held his stomach and fell. They have not told me what happened to my son. That cannot be said of a boy I saw that same morning when I came to give him his clothes. Even if he had stomach ache, was he supposed to die in the space of 10 minutes? These are the questions begging for answers.

The church is trying to cover up this thing because we are member. We are an Anglican family. My elder brother is a Venerable in the church and my family and I are members. They are not taking the case seriously.

He was buried on Monday (May 30). The most annoying thing about this is that my son’s remains had begun to decompose when his body was finally released for burial. A boy that they claimed died around 12.30am on Sunday had begun to smell and decompose by the next day. It is not clear. They should tell me what happened to my son.

I have discussed with the church. My brother who is even in Lagos came, and we agreed to carry my son’s remains to our hometown in Igbanke community, Orhionmwon Local Government Area, Edo State. It was at the graveside that we saw that my son’s body had already begun to decompose. I was amazed. I started shouting. That is another issue. I don’t know what they did to my son. This is high-level intimidation.

There is nothing the church wants to tell me. My son was killed. He had died long before they took his remains to the hospital. When my brother who is a lawyer called them that night when they told me that my son was unconscious, he probed deeper. They then told him that my son had died. If they had no hand in it, why then did they lie about it in the first place? Something is fishy! They are lying. They are covering up the matter. They don’t want to tell me the truth.

Festus Ugbotor is a tyre-repairer in Delta state who narrates how his 15-year-old son died on the premises of the Anglican Cathedral Church of Ascension, Diocese of Ika, Boji-Boji Owa, Ika North-East LGA of Delta State

I started taking pictures when I was 4