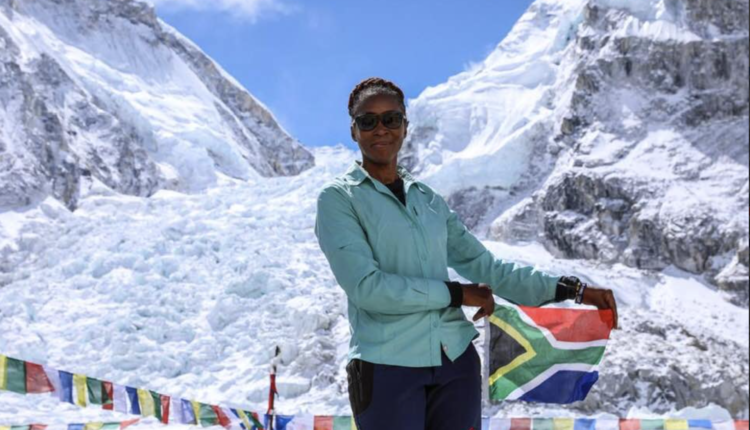 Literally finding yourself on top of the world must be a feeling no-one can easily describe and luckily for Zambia-born South African explorer and mountaineer, Saray Khumalo, she knows exactly how that feels like.

In May 2019, Saray made history by being the first black African woman to summit the Mount Everest – the tallest mountain in the world – at about 8,848 meters.

Climbing up the mountain, the daring mountaineer took with her four flags; South Africa, Zambia, Rwanda and one of the Africa Union. she became the first black African woman to reach the summit of Mount Everest.

Saray’s feat of summiting the Everest did not come on a silver platter. Growing up, the young vibrant lady has always been an explorer and a daring personality. She recalls, ‘Growing up, I was always out exploring and playing with boys. All my friends were boys, so I ended being more like a tomboy. When any one bother any of my siblings, I did be there to fight for them.

I remember when I was 18 years, and my boyfriend and I took a stroll. We saw some mulberries and wanted it. But they were so high up on the tree, and he asked me how we were going to get them. I just looked at him like, obviously we have to climb. He just stood there and watched me and I went up the tree to get it for us.

He was obviously very surprised but after that incident I remembered sometimes I needed to be a lady and allow a man open the door for me and other things.’

Even whilst growing up, Saray was a pathfinder – something more like a scout. During the summer, they did take two weeks and go camping where the camp instructors were pretty mean and left everything to these kids to find for themselves and make their way out of the woods on their own.

Khumalo after going through life with her partial adventures settled down in South Africa with her husband and kids and was peacefully practising her profession in accounting. One day, whilst on holiday in America, Saray comes across a group of friends who had the typical mentality towards Africa syndrome. ‘They asked me things like, I have a friend in Nigeria or Ghana, do you know them. And I would answer no, I have not even been to those countries. I was very surprised because I thought Americans were smart like I saw in the movie ‘Coming to America.’

It was here one person asked Khumalo if she had ever climbed to the Kilimanjaro – the tallest mountain in Africa – and there she realized, if they were not so smart, she had no business allowing them to tell her about things on her own continent.

So she put this on her bucket list and after months un-end of training, Saray Khumalo was finally able to summit the Mount Kilimanjaro in 2012. According to her, climbing a mountain is 70% mental preparation and the better prepared mentally you are, the easier it is for you to be physically fit.

She explains the difference between summitting and climbing as, ‘when you climb, you simply go up to wherever your adventure runs out but when you Summit, you go all the way to the very top of it.’

Spray through her climb to Kilimanjaro raised funds for kids through her charity, ‘Summit with a purpose,’ which raised money to build a library and gym for needy kids.

Saray Khumalo was inspired to do more and explore further when she encountered by a little who was fascinated by the fact that blacks from the township in South Africa could swim and do other basic things. She purposed to out and explore even more and through this, she decided to climb all seven of the world’s highest peaks.

Saray joined a team of mountaineers who trained and took on adventures together, Typically as expected, she faced a lot of prejudice and remembers told by one of her teammates, ‘you come from South Africa, there are no high mountains in your country and you’re a woman, what are you doing on this team.’

As life would have it, the first time the team climbed a height, this young man did not make it and Saray was filled with so much she wished he was there to ‘put it in his face.’

After so many months of training, Khumalo made her first attempt at climbing Mount Everest. This was a very terrifying experience as things did not go exactly as expected for Khumalo and her shepherd.

A few days before, the climb the camp was rocked by avalanches and She initially thought they were storms until it was explained to her. On the 18th of April, she wakes to much louder noise from the regular avalanche noises she was used to. Up to about 16 shepherds died from the effect of avalanches and these were people Saray describes as, ‘way more experienced than I am and it was quite emotional. Myself and my friends had our mood switched from excitement, straight to survival mode.’

The mountain was closed for mourning and Khumalo packed up and went home. She came back a second time after the mountain was opened to make another attempt at climbing the Mount Everest.

This time whilst on their way, an earthquake shook the mountain and Saray and her shepherd guide barely made it alive to tell the story. They thus, retreated to a camp nearby and after it was obviously things were not getting any better, Saray again packed up and came home.

It was her 3rd attempt at climbing the mountain in 2017, that Saray Khumalo had her most terrifying experience. Before starting the climb, the forecast had given a great weather window, which meant the winds were going to okay enough for climbing to summit the mountain. As they climbed further and got to the south summit, Saray says she realized her shepherd was struggling as much as she was. ‘I said to him, you know what, let’s turn around and go back to camp four. He agreed and when we did I realized I was getting weaker during the descent instead of getting stronger. My shepherd was not doing very well either.

In no time, I fainted. He had to leave me there and go back to camp four alone to get the others. They carried me on a stretcher to the camp. I was completely unconscious so they thought I was dead. The shepherd only changed my oxygen mask and left me probably for fate to decide. In the morning when they came, they thought they were coming in to pick up a dead body, but I turned and they said, ‘O you’re alive’, and I said yes, and very hungry.’

Saray went home after this near-death experience and it was obvious she was done and never coming back. But her youngest son, some time in 2018 asked her out of the blue when she was going back to the Everest and that sparked up something in her. She could not afford to teach her kids failure. She had to teach them anything was possible, so long as you believed so.

Khumalo packed up her bags again in 2019 and headed to what will be her 4th attempt at climbing the Mount Everest. This time she made it to the summit – the very top of the mount.

‘I had all my four flags with me, but could only take pictures with the Zambian and South African flags because it was so cold up there. I remember getting all the way up there in the Himalayas and remember my mother saying the sky is the limit but that was not so. I had the skies all the way below me and indeed the galaxy had to be the new limit. The guy who convinced me to summit the Everest died 3 weeks before I did it, and I took his picture with me. He trained with me in France all through and this was a time to show all who thought people like me could not, that we could.

She describes the experience saying, ‘It’s quiet but it’s windy. It’s a sea of mountains that go beyond the horizon. And the sky beneath is blue and rainbow reflection because of the sun running through the clouds. But what is more beautiful for me, is at night when you are walking up to see the moon and stars and you feel like you can almost walk up to it and grab it, like grabbing from the tree. That for me is beautiful because you must admit we have a beautiful sunrise in Africa but the nights are just mind-blowing.

Another thing is just sitting there and reflecting that, everyone that I know and everyone who is all knowing in the world is beneath me, walking around, sleeping and I am really stepping on top of the world. Again, it’s very dangerous because you feel you are on top of the world and you become even more daring than you were the day before.

And for me it is a very humbling experience that will live with me forever.’

Saray Khumalo still runs her adventures and is still supporting many charities through her ‘Summit with purpose’ organisation.